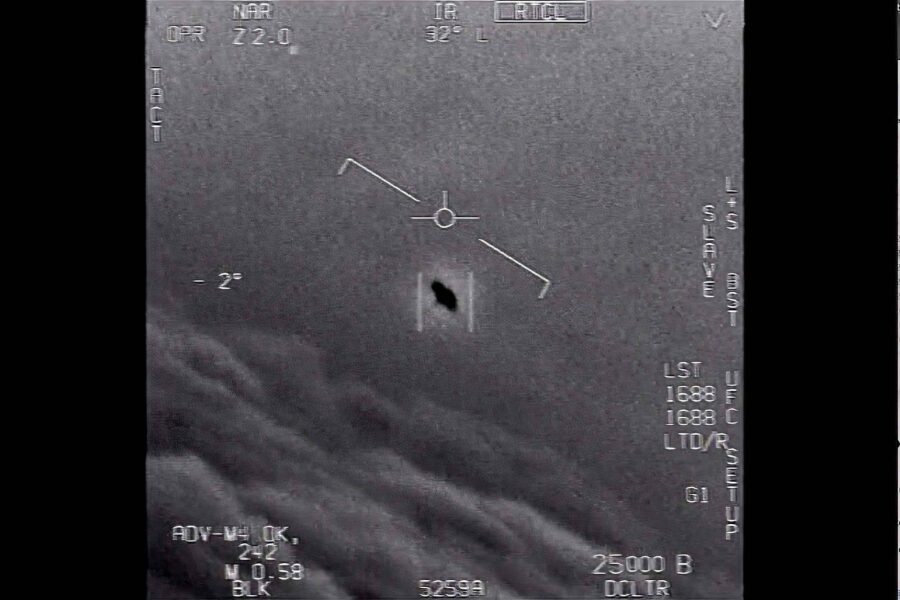 A new intelligence report sent to Congress on Friday concludes that virtually all of the 144 sightings of unidentified flying objects documented by the military since 2004 are of unknown origin, in an extremely rare public accounting of the U.S. government’s data on UFOs that is likely to fuel further speculation about phenomena the intelligence community has long struggled to understand.

The report — the government’s first unclassified assessment in half a century — does not offer any definitive answers on who or what may be operating a variety of aircraft that, in some cases, appear to defy known characteristics of aerodynamics, and that officials believe pose a threat to national security and flight safety.

The Pentagon, assisted by the Office of the Director of National Intelligence, found no evidence to indicate that they mark a technological breakthrough by a foreign adversary, or that the objects are of an extraterrestrial origin — though neither explanation has been ruled out in what has been described as a preliminary assessment that lacks sufficient data.

“Of the 144 data points … we have no clear indications that there is any non-terrestrial explanation for them. But we will go wherever the data takes us on this,” a senior U.S. government official said.

The report speculates about several possible explanations, ranging from natural phenomena to new developmental aircraft to what is simply referred to as “other” — a classification that encompasses a range of potential realities, including the possibility that at least some of the encounters defy simple, earthbound explanations.

“[Unexplainable sightings] pose a hazard to safety of flight and could pose a broader danger if some instances represent sophisticated collection against U.S. military activities by a foreign government or demonstrate a breakthrough aerospace technology by a potential adversary,” the report states.

The intelligence community uses five separate categories to try to classify the objects, according to the report; but just one of the 144 sightings examined in the report was definitively placed into a category. Eighteen of the observed UFOs — or unidentified aerial phenomena (UAP), in U.S. government parlance — exhibited potentially advanced technology that the U.S. government does not completely understand; 11 included encounters in which vehicles came dangerously close to American personnel.

“The UAP we’ve documented … demonstrate an array of aerial behaviors, which really emphasizes the point that not all UAP are the same thing,” the official added. “There is not one single explanation for UAP.”

Some of the 18 incidents “appeared to remain stationary in winds aloft, move against the wind, maneuver abruptly, or move at considerable speed, without discernible means of propulsion,” the report states. It also notes that some “have been detected near military facilities or by aircraft carrying the [U.S. government’s] most advanced sensor systems.”

The nine-page public report was separate from a top-secret portion, which is likely to prompt claims that the government is shielding crucial information. But the report’s public release marks a watershed moment for a topic that has long been the focus of public fascination and ridicule, as well as deep suspicion that the government is hiding its full knowledge about UFOs.

“[I]t has become increasingly clear that unidentified aerial phenomena are not a rare occurrence and our government needs a unified way to gather, analyze, and contextualize these reports,” House Intelligence Committee Chair Adam Schiff (D-Calif.) said. “As we continue to receive updates, we will share what we can with the American people as excessive secrecy will only spur more speculation.”

The five categories of possible explanations for the encounters include: common items such as birds, balloons or recreational drones; weather or other atmospheric conditions; new aircraft being developed by U.S. government entities or private companies; and an unknown design from a foreign adversary. The report also includes a catch-all category of possible explanations it calls “other” that “may require additional scientific knowledge” to more fully understand.

The government’s inability to categorize more than just one of the 144 unexplained sightings is attributed in part to a limited process for collecting such data, as well as different approaches by various government agencies, if any approaches exist at all. The report calls for expanding and standardizing the reporting methods.

“We quite frankly have a bit of work yet to do in order to truly assess and address the threats posed by UAP,” the official said.

Another major impediment is the lingering stigma surrounding UFOs that prevents pilots and other personnel from coming forward with their testimony for fear it could hurt their careers. Nearly all of the sightings examined by the Pentagon and ODNI were reported by Navy pilots.

Congress mandated the report’s creation in last year’s Intelligence Authorization Act, and lawmakers who sit on the House and Senate armed services and intelligence committees will be able to review the classified portion. Sen. Marco Rubio (R-Fla.), the vice chair of the Senate Intelligence Committee, led the push after revelations in 2017 that a Pentagon office was tracking a number of unexplained sightings reported by Navy pilots. For decades prior, though, former presidents as well as former Senate Majority Leader Harry Reid (D-Nev.) urged a greater focus on the phenomenon.

Rubio hailed the report as “an important first step” but said the Pentagon and intelligence community “have a lot of work to do before we can actually understand whether these aerial threats present a serious national security concern.”

The pilots’ public testimony and leaked videos also grabbed the attention of Congress. Last year, the Pentagon set up the Unidentified Aerial Phenomena Task Force, which compiled the congressional report.

The report hints at several calls to action that Congress can facilitate, including an expanded research effort and additional funding to develop a systematic government approach for collecting and analyzing UAP data, which officials believe is incomplete.

“Additional rigorous analysis are necessary by multiple teams or groups of technical experts to determine the nature and validity of these data,” the report states.

The report is also the result of years of behind-the-scenes lobbying by former Pentagon and intelligence officials and outside UFO enthusiasts who have maintained that military and intelligence leaders have not taken the phenomenon seriously enough, which some maintain presents a “blind spot” for national security.

“The hurdle is and was reliable data. We are in a better place because the Navy established a process in 2019 to overcome that problem and the Task Force is building on those improvements,” said David Norquist, the deputy secretary of defense in the Trump administration who established the UAP Task Force.

“The way ahead is to reduce the stigma, expand the data collection and use data analytics to better understand UAPs,” he added.

For some national security veterans pressing the government for a more robust investigation, the report is a major step toward solving a mystery that has either been ignored by officialdom or relegated to the margins of intelligence gathering and analysis and scientific inquiry.

“We now know what this is not,” said Luis Elizondo, a former Pentagon official and career counterintelligence specialist who oversaw UAP research before retiring in 2017 out of frustration that superiors did not take the intrusions seriously. “It is not secret U.S. technology.”

“I’m thrilled they had the guts to do so and that this conversation is now occurring,” added Christoper Mellon, a former Pentagon intelligence official and senior Senate Intelligence Committee staffer who has advocated for more research into the phenomena. “At this point, there is no denying that the UAP issue raises serious concerns that we cannot afford to ignore.”

He also said the most significant takeaway is that the U.S. government “confirms that none of these objects are built by us or known to us.”

It also strongly downplays, he said, the notion that a potential adversary has made some major technological breakthrough without the knowledge of U.S. spy agencies.

“There is no evidence to suggest these objects are from Russia or China,” Mellon said. “That theory seems especially weak when we consider how long this phenomenon has been observed.”

As the report also attests, the number of recorded sightings is likely a very low estimate.

“We know from experience that few military personnel were willing to report UAPs,” said Mellon.

So what isn’t in the full report? Mellon suspects that the government is still shielding some data.

“It is far from clear how much information the [Pentagon task force] could elicit from organizations led by 4-star flag officers and agency directors,” he said. “Undoubtedly, some important information was not shared, potentially for a variety of reasons. Congress should inquire about that.”