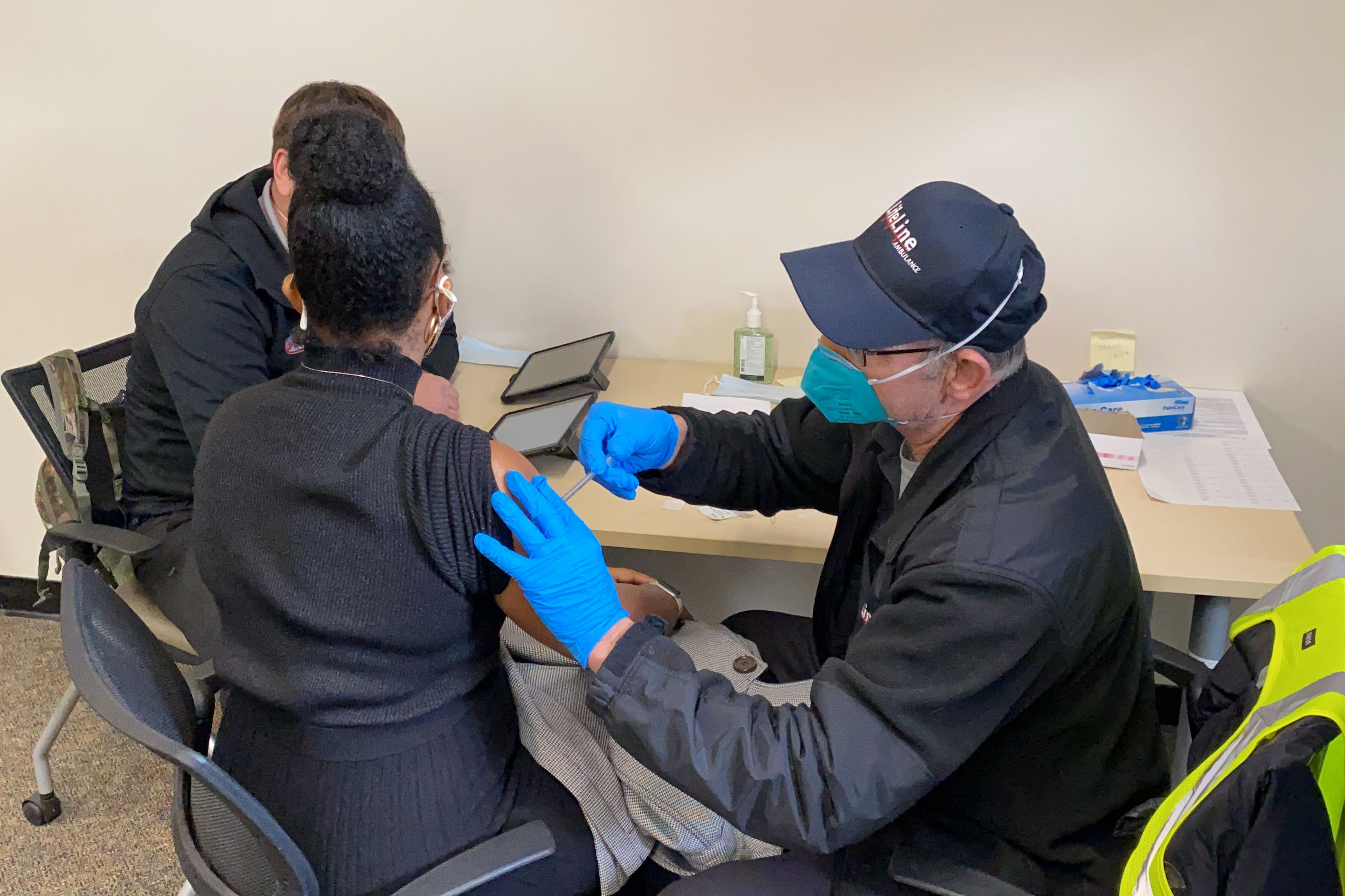 Top Biden administration health officials trying to slow the spread of the Covid-19 Delta variant have largely given up on the possibility of reinstating mask and social-distancing rules in favor of a grassroots vaccine education campaign.

The Centers for Disease Control and Prevention, the Department of Health and Human Services and the White House Covid-19 Task Force have discussed whether to press mayors and governors in the Midwest and South, where the highly transmissible Delta variant is spreading quickly, to once again require mask mandates, according to three senior Biden health officials. But the administration ultimately concluded that many people who are not vaccinated are also those who have resisted wearing masks.

Instead, the federal government will try to convince hesitant Americans to get vaccinated by working with state officials and trusted community members to communicate the benefits of the shots, the three senior officials said. The president’s team is not confident that the new campaign will change hearts and minds, the two officials said, but it is falling back on old messaging in part because top administration officials are unsure what other tactics will work.

Only about 46 percent of the U.S. population is vaccinated, and the number of doses administered has fallen by almost 300,000 per day since June 7, according to the Centers for Disease Control and Prevention.

The plateauing vaccination rate underscores the extent to which the White House is struggling to find new and better ways to convince Americans to get Covid-19 shots — while much of the rest of the world struggles to secure a steady supply of vaccines. And it raises questions about how the federal government will manage increasing Covid-19 cases associated with the Delta variant in the months ahead, with businesses and schools returning to normal operations.

“This is the door-to-door campaign, this is the church-to-church, this is going into the community and meeting people where they are. We’re not going to convince everybody,” said Scott Becker, CEO of the Association of Public Health Laboratories. “The Delta variant and its explosive growth — I wish there was a better way to articulate the damage that it is doing and will do in those communities, but it is going to be a tough slog.”

New Covid-19 infections have increased by more than 50 percent over the last two weeks in under-vaccinated states such as Missouri and Oklahoma. Many of the cases are tied to the Delta variant, which the CDC says now accounts for one-fifth of new infections nationwide.

“Based on the data that we have right now, the Delta variant is more transmissible than Alpha,” the strain that has predominated in the U.S. this spring, said Summer Galloway, a senior adviser at the agency.

Preliminary data from the U.K. suggests that unvaccinated people infected with the Delta variant have an increased risk of hospitalization, she added. The CDC is studying whether the variant leads to more severe infections in undervaccinated communities. But there is good news: recent data shows the Pfizer vaccine is nearly 90 percent effective against Delta, making vaccination one of the most effective ways to stop the variant’s march across the U.S.

“We really just want to encourage everyone … to get vaccinated. What we don’t want to have happen is we have a significant proportion of the population that’s unvaccinated and you see an increase in the number of cases and the number of hospitalizations, the number of deaths,” Galloway said. “It could lead to another surge.”

In the meantime, the CDC is still encouraging people who are unvaccinated to wear masks and avoid crowded indoor gatherings, an agency spokesperson said.

The number of U.S. adults who say they will definitely not take a Covid-19 vaccine has remained steady at 13 percent, according to a Kaiser Family Foundation survey released last month. Twelve percent say they are waiting to decide if they will get vaccinated, while 7 percent say they will only opt for immunization if it is required for work or other activities.

The Biden administration in March rolled out a $1 billion advertising campaign, relying on radio and television spots to educate Americans on the benefits of vaccination and on where and when they could receive the shot. The administration partnered with 275 groups, including the Christian Broadcasting Network and Nascar, to reach areas where hesitancy or outright opposition to the vaccines is high.

The federal government has also joined up with the Ad Council — a nonprofit organization that often partners with the federal government on public service announcements — and the Covid Collaborative, a group of organizations working together to combat the virus, on ads promoting Covid-19 vaccines. The CDC Vaccine Task Force is also offering “vaccine confidence consultations” to interested jurisdictions. The consultations include briefings between CDC officials and local leaders about how states can build trust in their communities around vaccination.

The three senior Biden health officials said the administration is pushing more of the responsibility of convincing the unvaccinated to get the jab to local officials, who can tap trusted community leaders to spread the word. The hope is that those local leaders will be more effective messengers than national ad campaigns or top federal officials.

Over the last two weeks, officials from the CDC, HHS and the White House Covid-19 Task Force have formulated a plan to work with local officials, including mayors, to knock on doors in areas with low vaccination rates to talk with people about signing up for the shot. Officials like President Joe Biden’s chief medical adviser, Anthony Fauci, and CDC Director Rochelle Walensky also are increasing their appearances on national TV programs and with local press in the South where the Delta variant is spreading. 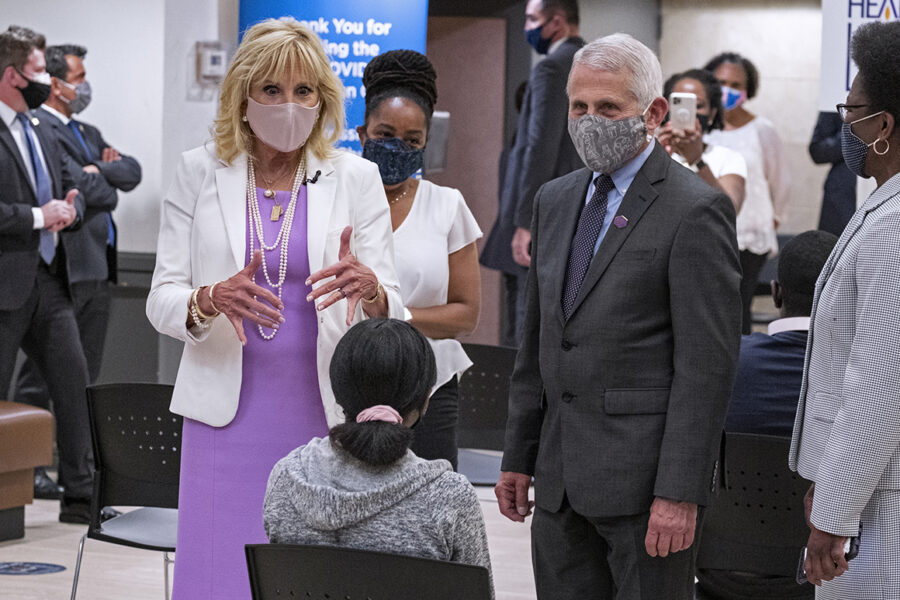 But the Biden team is still unsure how many people could be swayed by these more local appeals. The White House is now planning for what top officials see as inevitable Covid-19 surges in several states with low vaccination rates later this summer and into the fall.

Many states have already tried on their own to encourage people to get Covid-19 shots — often through lotteries and other financial incentives. But that strategy has largely failed, and Delta Covid-19 cases continue to rise.

The CDC is now considering whether to update guidelines for schools and for domestic and international travel. Federal and state health officials are debating how and whether to recommend proof of vaccination for everything from restaurants to movie theaters to office buildings. The fear, Fauci recently told POLITICO, is that recommending proof of vaccination could cause an uproar among unvaccinated people. While federal health officials have pledged so-called vaccine passports will not be implemented at the national level, some states and private businesses have explored using vaccine passes to support safe reopening.

European Union officials have recently put pressure on U.S. diplomats overseas to open up travel to the U.S. with proof of vaccination, according to a U.S. official with direct knowledge of the matter. Germany recently issued an order that allows all U.S. residents to fly into the country if they can prove vaccination or a negative Covid-19 test.

For now, Biden administration officials say the increasing number of Delta cases is cause for worry but not overwhelming dread. The Pfizer vaccine in wide use in the U.S. works well against the variant; Moderna’s vaccine uses similar technology, so the hope is that it will be similarly effective in warding off Delta. The CDC is currently in the midst of conducting studies to pin down just how well the current vaccines protect against Delta and what impact it has on the unvaccinated population, particularly children.

“We have to stay vigilant. We see this strain is affecting how much protection people get from the first dose dramatically,” said Phil Febbo, chief medical officer of DNA sequencing company Illumina, which is working with the CDC to study the spread of Covid-19 variants in the U.S. “I don’t think we’re that far away from a different variant that goes beyond the Delta and decreases significantly the efficacy of both doses.”