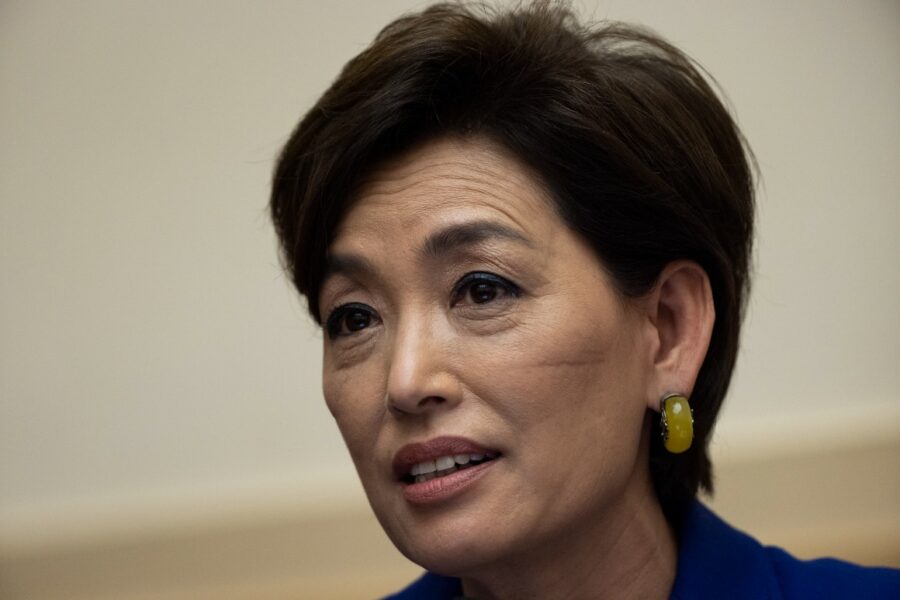 A race to fill one of the most coveted committee seats in Congress is forcing Republican leaders to make a tough choice between how much they value seniority over the need to improve diversity in their ranks.

At least six GOP lawmakers are vying for an open spot on the House Financial Services Committee, whose vast jurisdiction includes overseeing banks and the nation’s stock markets. The 24-seat Republican membership on the committee — which is also a prime perch to raise campaign cash from Wall Street — is nearly all white and male.

Rep. Pete Sessions of Texas, who returned to Congress this year after serving from 1997 to 2019, has emerged as a frontrunner because of his tenure, which included a stint on the then-House banking committee. Other white, Republican men with multiple terms in office are also seeking the post. But they’re facing competition from freshman Reps. Young Kim of California and Byron Donalds of Florida, who would increase the racial and gender diversity on the Republican side of the committee.

“I’ve always said the Republican Party is the Grand Opportunity Party,” said Kim, who flipped a House seat to GOP control in 2020. “Having somebody like me giving the woman’s perspective, the small business perspective, the immigrant perspective — the appreciation will go far in terms of legislating and creating policies that will create jobs.”

The selection, which the House GOP Steering Committee will consider on Monday, could be an important bellwether of the extent to which the party values diversity. Republican leaders are under increasing pressure to expand the representation of women and people of color in the party as they try to win back the House in the November 2022 elections.

House Minority Leader Kevin McCarthy, who touted “the year of the Republican women” after fellow Californian Kim and other female Republicans won House seats in November, holds four votes on the committee that will pick the new Financial Services member.

“We are stronger because of our diversity,” McCarthy said after last year’s election. A spokesperson for McCarthy didn’t respond to a request for comment on this story.

Republicans say part of the reason they have to make the choice at all is because Democrats who control the House decided at the beginning of this Congress to pare down the size of the Financial Services Committee by six seats, preventing the GOP from populating the panel with a more diverse group of members.

Democrats shrank the committee led by Chair Maxine Waters (D-Calif.) after finding that its numbers — 60 members in the last Congress — were unwieldy. The largely white, male Republican side of the panel today has only one female member and two Hispanic men.

“Unfortunately, Speaker Pelosi’s decision earlier this year to shrink the size of the committee has forced a choice between seniority and diversity,” said Stephen Cote, a former GOP staff director for the Financial Services panel who is now a principal at the lobbying firm Mehlman Castagnetti.

Waters, who became head of the Financial Services Committee in 2019, created a diversity subcommittee and has focused her agenda on expanding economic opportunities for underserved communities.

Sessions looms large over the race because of his decades in Congress. He led the National Republican Congressional Committee and served as chair of the House Rules Committee before losing his long-time Dallas-area seat in 2018. He returned to Washington this year as the representative for a district covering Waco, Texas. He declined to be interviewed for this story before the Steering Committee made its decision.

Reps. Ralph Norman (R-S.C.) and Dan Meuser (R-Pa.) are also vying for the seat. Both are touting their business backgrounds, with Norman working for four decades as a real estate developer and Meuser serving as president of a manufacturing company before he was named Pennsylvania’s secretary of Revenue. Meuser is also making the case that the committee needs more representation from the Northeast.

They’ll have to overcome bids by the more junior members Kim and Donalds, who were elected to Congress for the first time last November.

Kim is an immigrant who in 2020 was one of the first Korean-American women elected to the House. Before joining Congress and serving in the California State Assembly, she was an aide to now-retired Rep. Ed Royce (R-Calif.), who was a senior member of the Financial Services Committee. She also worked as a financial analyst and owned a women’s wear firm.

Kim would double the Financial Services Committee GOP’s female representation while also serving as its only Asian-American Republican and its only Western state Republican.

“I’ve made it very, very clear it’s important to have representation from the Western states,” she said in an interview. “It’s important because my district includes three counties — Orange, LA and San Bernardino counties — and we have tens of thousands of Asian American- and minority-owned small businesses, credit unions and financial institutions. But we don’t have voices or advocates to speak for them.”

Royce said his former committee would be well-served by adding Kim to its ranks.

“She’s an immigrant, she’s a mother, she hails from a Western state and she has experience in financial services,” he said. “I think you call that a grand slam.”

Before winning a House seat last year, Donalds worked in finance in Florida and served in the Florida House of Representatives. He is one of only two Black Republicans in the House, but he said diversity is not part of his pitch for the Financial Services Committee.

“I don’t get caught up in that stuff,” he said. “I let other people worry about that. The reason why I think I should be on is because I have the qualifications to be on. Somebody with my background in a lot of respects should be a shoe-in.”

Another argument in favor of Kim or Donalds is that either would likely get a significant Wall Street fundraising boost on the committee as Republicans look to hold onto their seats in the 2022 election. But Republicans are also increasingly bullish about winning back the House majority next year, which would give the freshmen another opportunity to serve.

“In the next 18 months, if they do their jobs well, all of them will be on the committee,” said Sam Geduldig, a former Republican House Financial Services staffer who is now co-CEO of lobbying firm CGCN.

Rep. Patrick McHenry (R-N.C.), the top Republican on Financial Services, said the GOP has “high quality, talented Republicans who will be a great addition to the committee.”

“It’s an embarrassment of riches,” he said.