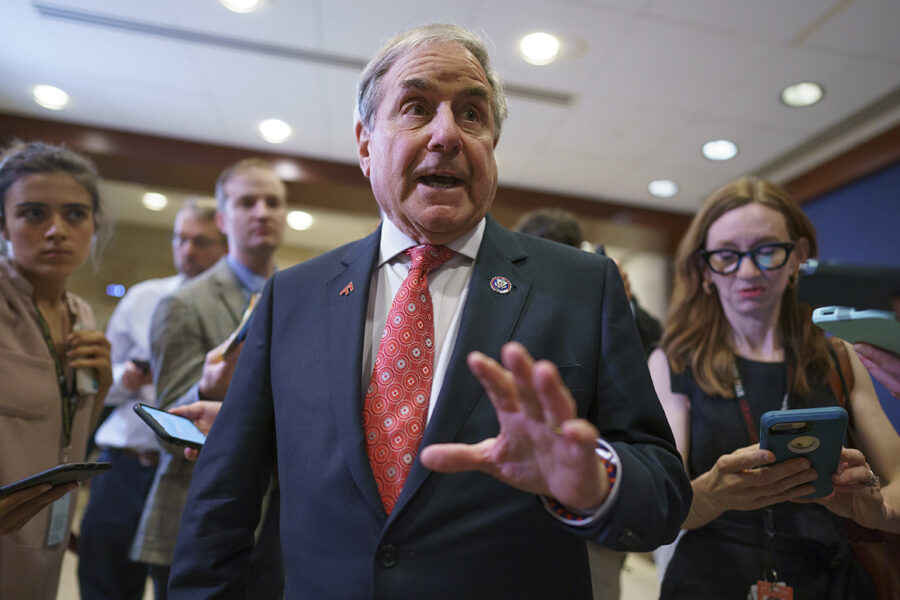 Congressional Democrats are laboring this week to preserve their party’s fragile peace on an increasingly fraught infrastructure strategy.

As President Joe Biden scrambles to keep his bipartisan deal with Senate Republicans alive, Democrats are working behind the scenes to mollify their more restive members and present a united front in a critical stretch for his agenda. Moderates are worried about too much spending in a second, one-party bill, while progressives are worried about too little spending — and senior Democrats are caught in the middle.

House Budget Committee Chair Rep. John Yarmuth (D-Ky.) is set to meet Tuesday afternoon with leaders of the Congressional Progressive Caucus, a group that’s using their leverage in the House to outline strong demands for the bigger spending bill Democrats have promised will accompany the bipartisan infrastructure legislation.

White House officials will head to the Hill on Tuesday to meet with small groups of Democrats, including leaders of the centrist New Democrat Coalition. Another centrist group, the Blue Dog Democrats, is set to meet with Yarmuth on Wednesday and Biden adviser Steve Ricchetti later this week, while the members of the bipartisan Problem Solvers Caucus also met with Ricchetti on Tuesday.

Less than 24 hours ago, Yarmuth privately urged a group of senior Democrats not to draw public red lines for either of the bills, whether it’s price tags or policy wishes, according to several people in the room.

“The details matter. And we don’t have those yet. So it’s just safer not to talk about top line numbers,” Yarmuth told reporters Tuesday.

Democrats in the House and Senate, contrary to his advice, have spent weeks laying out their demands. That includes the Progressive Caucus, which has repeatedly told White House officials and party leaders that its members won’t support a bipartisan infrastructure bill without a huge separate spending bill in tow.

“We have a commitment that regardless of what happens with bipartisan legislation, they will give us a reconciliation legislation that goes as far as we’ve wanted it,” Rep. Ilhan Omar (D-Minn.) said in an interview, referring to the arcane budget process Democrats plan to use to pass their second bill without a GOP vote.

Omar noted that in a recent poll of the group, 60 percent of members who responded said they would be willing to withhold their votes for a bipartisan infrastructure bill without that broader legislation.

“The linkage is non-negotiable for me,” added progressive Rep. Ritchie Torres (D-N.Y.), who said the bipartisan compromise excluded his priorities, like affordable housing. As a result, he added, “I will refuse to vote for any bill that fails to be linked to a larger reconciliation bill.”

Some on the left were disappointed by Biden’s comments over the weekend, when he softened his threat to oppose a bipartisan bill if Democrats didn’t also deliver him a broader reconciliation bill. Biden’s clean-up job on Saturday was intended to appease GOP senators rankled by the president’s insistence on linking his two-part infrastructure playbook: a bipartisan deal in one hand and a monster party-line bill in the other.

The broader Democratic tactics were hardly a secret, with House Speaker Nancy Pelosi saying publicly last week that Democrats wouldn’t pass an infrastructure bill “unless we have the reconciliation bill passed by the United States Senate.”

But Biden’s acknowledgment that Republicans were “understandably upset” by his suggestion that he’d veto a bipartisan bill without a Democrats-only companion emboldened the GOP. Senate Minority Leader Mitch McConnell (R-Ky.) on Monday urged Biden to exact the same conciliatory clarification from Pelosi and Senate Majority Leader Chuck Schumer.

Meanwhile, Sen. Joe Manchin — whose opposition is enough to tank any party-lines bill in the Senate — reiterated on Tuesday that Congress should move forward with the process on the bipartisan infrastructure package, separate from progressives’ demands for a second bill.

“Saying ‘I’m going to not vote for the other one because you haven’t guaranteed the vote for everything,’ we’ve never done legislation that way,” Manchin told MSNBC. “I’ve never been a part of it in the 10 years I’ve been in the Senate, so let’s work the legislation the way it’s going to be presented.”

The West Virginia Democrat has indicated he would support the Democrats’ second measure, which some have dubbed the “human infrastructure” bill, but noted Tuesday that he “hasn’t agreed on the amount” and needs to see what will be in the legislation.

Manchin is among a small group of moderates in the House and Senate who say bipartisanship should take first priority and blanch at the idea of a massive one-party bill at the same time. They could halt Democrats’ plans on the floor, if they were willing to cast no votes — but so could the progressives making diametrically opposed demands.

That leaves Democratic leaders hustling to appease both ideological ends of their party with a strategy so delicate that they can’t afford any defections in the Senate, and only three or four in the House.

“There are a number of different views, but I think we will come together in support of the president’s proposals,” House Majority Leader Steny Hoyer told reporters on Tuesday.

Biden, during a visit to Wisconsin, highlighted the importance of cross-aisle compromise in executing his agenda.

“Every time we negotiate in good faith and come together and get something big done, we break a little more of the ice that too often keep us frozen in place from solving real problems that people are facing,” Biden said at the La Crosse Municipal Transit Utility on Tuesday afternoon.

Back on the Hill, House Democratic Caucus Chair Hakeem Jeffries declined to say whether his chamber would only vote on a bipartisan bill if the Senate first sends over a bigger, partisan bill. Jeffries added that he wouldn’t necessarily call one “contingent” on the other.

“The speaker and majority leader have been very clear about how we’re gonna proceed,” Jeffries said, adding that Democrats planned to pass legislation with big investments in affordable housing, elder care, child care and a “green sustainable economy.”

Such careful wordsmithing comes as Congress nears what is expected to be a frenetic July. Democrats in both chambers will need to unite on a budget blueprint to unlock their party’s powers to muscle through a bill without GOP votes — without scaring off Republicans in the upper chamber.

At stake is a Democrats-only reconciliation bill that some lawmakers are already predicting could mark their party’s biggest achievement in more than a decade.

Marianne LeVine and Brittany Gibson contributed to this report.