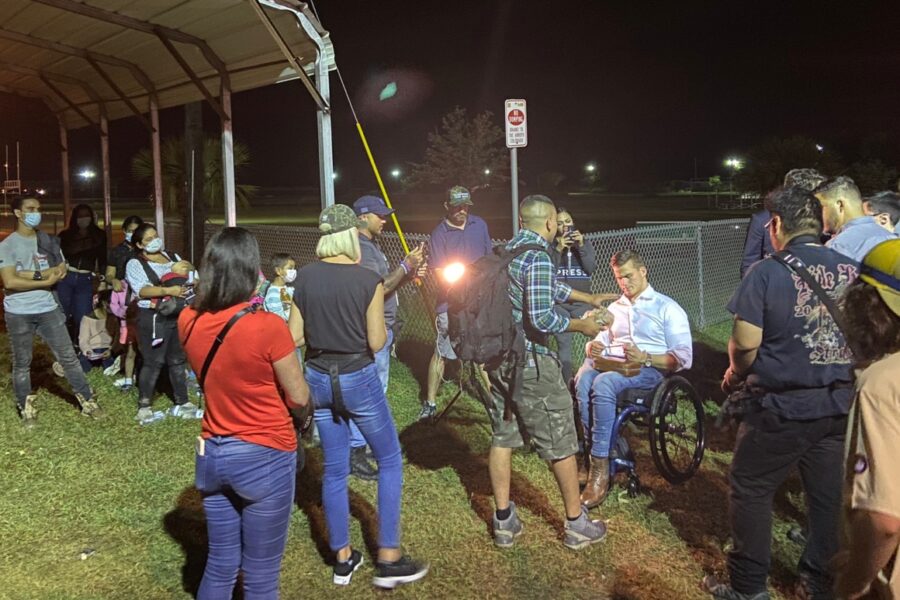 McALLEN, Texas — House Republicans want to make immigration a centerpiece of the 2022 midterms. They can’t do that without fully embracing Donald Trump — a reunion that they sealed on Wednesday.

The group of roughly two dozen GOP lawmakers got outsized attention for their trip to this border town simply because it was a precursor to Trump’s own visit. And Republicans soaked up that notice, with two immigration hard-liners even walking alongside migrants seeking asylum.

Gov. Greg Abbott (R-Texas), whose invitation to the border Trump accepted, set the tone with an effusive introduction of the former president as having done “more to secure the border than anybody and any president ever has.”

That embrace of Trump also means closely identifying the party with his coarse rhetoric, which helped push swing states like Arizona into Democrats’ column last fall. Down here in the Rio Grande Valley, however, Republicans see potential payoff against vulnerable border-state Democrats. 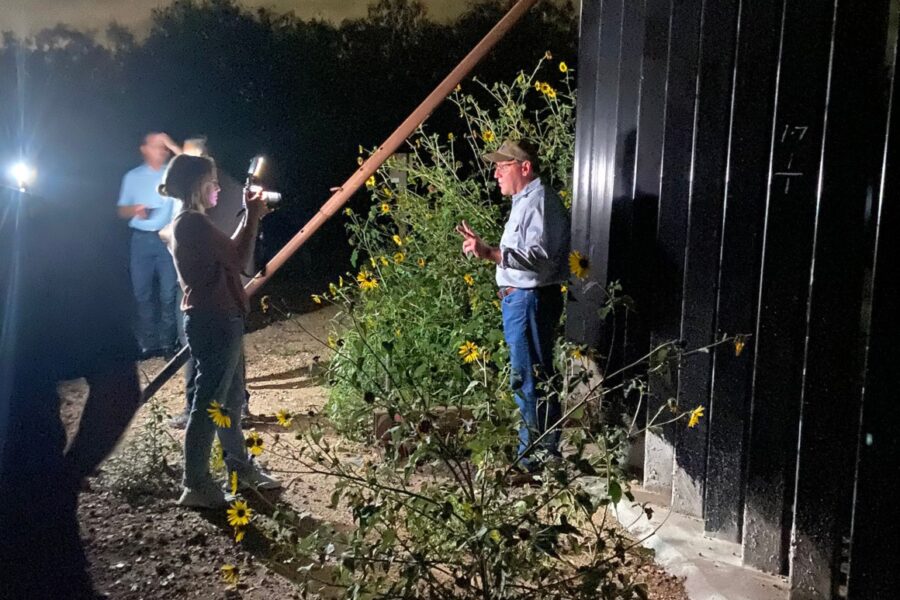 “I think you’re going to see a surge of voters who are fed up with a lack of security, “ freshman Rep. August Pfluger (R-Texas) said in an interview. “The Biden administration is not prioritizing American security … In 2022, what I think we will see is, people are tired of a lack of a good policy.”

Republicans are already starting to invest in the very district where members gathered for the trip: Texas’ 15th. The incumbent, Rep. Vicente Gonzalez (D-Texas), won this once-safe blue seat by just 3 points in 2020 against his GOP opponent, Monica De La Cruz-Hernandez. She has already launched a second bid against Gonzalez and met Tuesday evening with members of the Republican Study Committee ahead of their border event with Trump to make her case for flipping the seat next year.

When House Republicans appeared alongside Trump on Wednesday, the climate was almost nostalgic. While Trump talked about the migration uptick, he also devoted significant time at a news conference to personally mentioning each of the House Republicans who joined him.

For Rep. Lauren Boebert (R-Colo.), whose home Trump warned that no one should enter uninvited lest “guns will be blazing,” the laudatory shoutout was received. As he spoke about his loss to President Joe Biden, calling it a shame, Boebert called back at Trump that “you won.”

The former president even welcomed Rep. Chip Roy (R-Texas), whom he had previously called to face a GOP primary challenge after Roy vied with Trump favorite Rep. Elise Stefanik (R-N.Y.) for a party leadership spot. “Hi Chip. How are you, Chip? Talk to you later, Chip,” Trump said.

It didn’t take long for some of the House Republicans, who appeared giddy at Trump’s news conference, to share online clips of their ex-presidential acknowledgments. A few could be seen taking photos of one another, trying to capture Trump in the background behind them, as they waited to hear him speak.

The visit with Trump caused its GOP attendees to miss a key House vote on Speaker Nancy Pelosi’s resolution to establish a select committee to examine the Jan. 6 Capitol attack. Multiple members either missed the vote or voted by proxy, with members like Boebert, Rep. Madison Cawthorn (R-N.C.), Chris Jacobs (R-N.Y.), Lisa McClain (R-Mich.) and Ralph Norman (R-S.C.) citing the pandemic as their reason for taking advantage of a proxy system many in their party have criticized.

It wasn’t lost on them that Trump lassoed the attention that they had been trying to bring to the border.

“Republicans visited the border repeatedly this year,” Banks said in an interview. But it wasn’t until Trump announced he would be making the trek to the border that Republicans received the sort of “attention we could not get before,” he said.

That attention landed on Banks, who chairs the Republican Study Committee, and roughly two dozen Republicans who joined the trip he organized to view border crossings firsthand.

The Republicans briefly accompanied migrants traveling along a gravel road after crossing the Rio Grande. Some were children joined by their mothers, while others traveled alone.

At one point, Reps. Lauren Boebert (R-Colo.) and Mary Miller (R-Ill.) exited their vehicles to walk with the migrants, asking them questions that were translated by a Spanish-speaking member of the media who was covering the trip. This group said they were from Guatemala and planned to surrender themselves to border patrol agents.

The Republicans are expected to cite their emotional moment as they hammer the Biden administration for policies they say have escalated a dangerous environment at the border, including empowering drug cartels and putting unaccompanied migrant children at risk. But Democrats aren’t shrinking from that fight, pushing back hard against a Trump immigration legacy widely derided for its separation of migrant families at the border.

The trip also allowed roughly two dozen members of the congressional delegation that Banks organized to see the border crossings in action. On Tuesday night, a visit to a path frequently used by migrants crossing the border in La Joya, Texas, afforded a new experience for many GOP members: Talking with migrants traveling along a gravel road after crossing the Rio Grande, who were planning to surrender themselves to U.S. Border Patrol agents. Some children were accompanied by their moms, while others traveled alone.

“If Republicans were serious about addressing issues at the border, they’d join President Biden and Democrats in working to clean up the mess they left behind, create a safe and humane immigration system, and finally pass immigration reform,” Democratic National Committee Rapid Response Director Ammar Moussa said in a statement. “Anything less is political theater.”

This week’s GOP border trip was already in the works when Vice President Kamala Harris announced that she would be visiting El Paso, Texas, to observe the situation. Republicans had repeatedly attacked her for failing to visit the border after assuming a leadership role on immigration for Biden’s White House, and they responded to her trip by contending that a visit to El Paso sidesteps the more serious problems visible in the McAllen area.

Biden and Harris “swore they were going to protect and defend the Constitution and obey the law and enforce the law,” Rep. Brian Babin (R-Texas) told reporters after the GOP group arrived Tuesday night. “And yet they have absolutely willfully opened our border up, encouraging people to migrate up here and take an extremely dangerous trek.”

Several migrant children taking that trek crossed paths with the Republicans on Tuesday night, clutching small backpacks and carrying papers explaining the reason for their travel. The children sat or slept on the wet grass, waiting to be processed and loaded onto a bus. One child, an 8-year-old who lay on the ground, explained to lawmakers through an interpreter that he had crossed the border on his own with the hopes of meeting up with his mother and brother who were already in the U.S.

Miller looked visibly upset as she listened to the boy’s story.

“Since the administration is saying that they are unable to control this, then by definition, they’ve owned up to an invasion,” Rep. Darrell Issa (R-Calif.) said. “They have been unable to to meet their Constitutional requirement.”

Issa was one of multiple outspoken pro-Trump conservatives who joined the Texas trip organized by Banks, whose caucus is the largest in the House GOP.

“A lot of members asked if they could join us” after Trump accepted Gov. Greg Abbott’s (R-Texas) invitation to the border, Banks said of fellow House Republicans. “We didn’t widely publicize it.”

The former president attended a briefing with Abbott, Lt. Gov. Dan Patrick and Attorney General Ken Paxton on Wednesday afternoon prior to his scheduled tour of border barriers.

Trump is using his trip to Texas both to serve as a defense of his term in the White House and a dry run for future campaign themes. During the briefing he touted the symbolic and functional utility of a wall along the U.S.-Mexico border and tied China to illegal drugs being smuggled into the country.

At times Trump veered off topic into his false assertions that the presidency was stolen from him and laments about New York City election officials bungling the Democratic mayoral primary tally, in addition to criticizing Biden for unwinding many Trump-era border and immigration strategies.

“We had all these great policies going, and they were all ended,” Trump said. “It’s almost like they were ended because I did it.”

Nick Niedzwiadek contributed to this report.