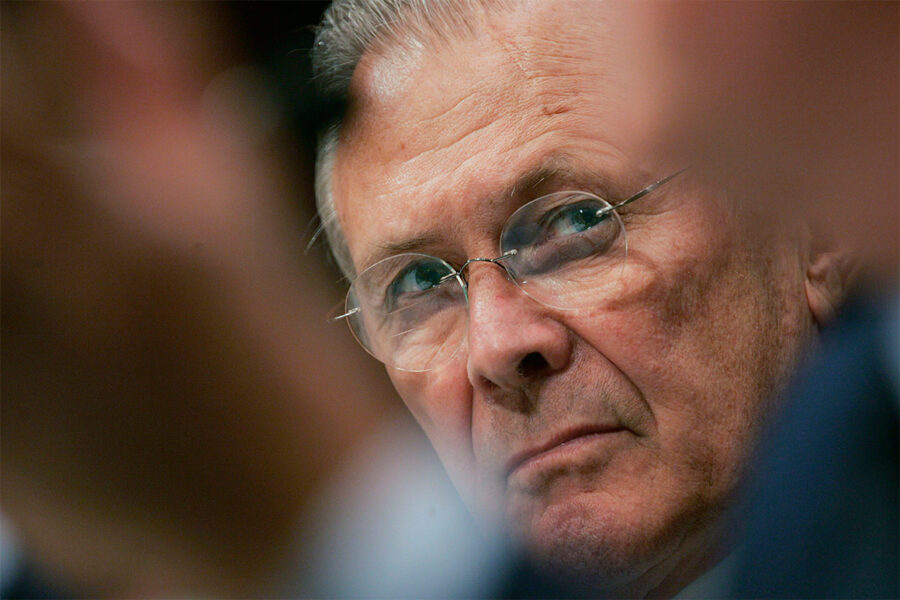 When Donald Rumsfeld died this week, in-memoriams for the former secretary of defense who led the charge to war in Iraq were as blunt as the man himself.

Some were appropriately straightforward. Some were charged with firsthand emotion and experience. Some were downright tasteless. Barring those who knew the man personally, Rumsfeld did not benefit from the hagiographic grace period that’s usually allowed even the most controversial public figures in the wake of their death.

That dearth of well-wishes is the result of something just as socially aberrant. The failure of the Iraq War that Rumsfeld championed is pretty much the only thing about which Americans of all political stripes agree. Joe Biden, Donald Trump, John McCain and Bernie Sanders all came to agree that the war was a “mistake.” But Rumsfeld remained unapologetic about Iraq until the very end, and in the process, made his name and that “mistake” largely synonymous.

Both Rumsfeld and our Iraqi experiment in nation-building have now passed into history. But if you were paying attention recently, a revealing skirmish over their place in it was waged in a very modern medium: the serialized podcast.

In the fifth season of Slate’s “Slow Burn,” which concluded just weeks before Rumsfeld’s death, host Noreen Malone delivered listeners one of the series’ signature deep dives on an event that looms so large over American history we’ve almost forgotten the details of what actually happened. A little less than a year before that, the left-wing journalists and respective Vice and “Chapo Trap House” alums Noah Kulwin and Brendan James released “Blowback,” an unapologetically left-wing re-examination of the war’s many causes and ongoing effects.

All three hosts are millennials whose respective series gave listeners a detailed — and, speaking as a listener, sometimes too detailed — account of the folly, hubris and collective mania that led to the Iraq War. One might imagine that they would feel a certain solidarity, a shared mission to provide their generation with a clear-eyed, heavily researched and reported view of a conflict that shaped the world in which they came of age and are now inheriting. One would be wrong.

When Slate launched “Slow Burn” in April, the loyal, rabid “Blowback” fanbase attacked, egged on by influential lefty-world media figures. Slate’s effort was a copycat, they said. It was shameless war apologia. It was CIA propaganda. Team “Slow Burn” wisely declined to take the bait, but after just a single episode, the battle lines were clearly drawn: the mealy-mouthed, ambivalent, lamestream media against the pirate truth-tellers who laced their own account of the war with Howard Stern-like audio drops and profane tirades against Rumsfeld and his cronies.

The difference might seem stylistic, not substantial. To an extent, it is: Both shows are painstakingly researched, and tell the same cautionary tale. But history is storytelling, and in the world of storytelling, style matters. “Slow Burn” allows space for figures like the late anti-Saddam Iraqi politician Ahmed Chalabi, former New York Times reporter Judith Miller, and, yes, Donald Rumsfeld, to speak for themselves, either in the present or through the historical record, and invites the listener to draw their own conclusions. “Blowback” is didactic, its hosts bombarding the listener with their sturm-und-drang argument about the Iraq War as a portal to hell that directly caused our modern-day political ills.

It might seem at first like a typical intra-left difference in temperament. But it doesn’t map neatly along ideological lines — influential thinkers and activists from the far left to the far right share the “Blowback”-ian conception of the March 2003 invasion of Iraq as a Year Zero for the post-Cold War era. In the spirit of this weekend’s holiday, you can almost think of it as a new founding myth: America was reborn in the Middle East’s crucible, not as the leader of a rules-based, liberal international order, but a multi-tendrilled, ever-expanding and unaccountable corporate hegemon.

Founding myths are powerful. It matters how we write them, what we include, and what we leave out. With still-inflammatory characters like Rumsfeld, Chalabi, and Miller to draw on, the Iraq War is a potent basis for such stories. The two series serve together as a convenient case study in how we might approach them and where they might lead us.

The “Slow Burn” approach is well-established at this point: Take a well-known event in recent American history (Watergate, the Clinton impeachment, Ku Klux Klan leader David Duke’s 1991 campaign for Louisiana governor) and explore, in exacting detail, the surrounding political, cultural and social detritus — the better to understand how Americans experienced them at the time, and, therefore, how they fit into our national narrative.

This approach, when applied to the Iraq war, is revelatory. Iraq is a target as rich as Watergate: both events are metonymic with the erosion of trust in American institutions that’s led us to our current uncertain moment.

Season five of “Slow Burn” kicks off with a leisurely, episode-length profile of Chalabi, the exiled aristocrat who thirsted for decades to supplant Saddam Hussein as Iraq’s ruler. Malone depicts Chalabi as a skilled flatterer with an ample supply of cultural (and financial) capital to cash in with Western powers who had their own reasons to yearn for Saddam’s scalp. (This, in large part, is what initially drew the ire of the over-caffeinated “Blowback” fanbase: Chalabi appears here as a powerful and dangerous man, and not simply a preening wannabe oligarch — as if it were somehow impossible for him to be both.)

It shows the war as the outgrowth of a society-wide, post-9/11 madness that led even those otherwise inclined toward dovishness to fervor. Malone and her crew drag the paper-thin intelligence and galaxy-brain editorial rationalizations that birthed a pro-war consensus into stark daylight. Combined with the rueful present-day recollections of then-hawks, like Vox co-founder Matt Yglesias, as well as those who remained stalwartly and consistently against the war, like the journalist Mark Danner, the effect is to provide a sobering reminder of the power of narrative and motivated reasoning in institutions ranging from the State Department to the New York Times.

But the series falters when it fails to adequately push back against that consensus. Its penultimate episode centers around an interview with Judith Miller, the Times’ now-infamous former national security reporter who credulously repeated Bush administration hype over weapons of mass destruction into the public record. In the lengthy interview, Miller remains proud and defiant about her track record, insisting that she did her job by simply reporting the administration’s beliefs. Of course, it doesn’t take an advanced degree in journalism to understand that such stenography is where a reporter’s job begins, and not where it ends. Here, the limitations of “Slow Burn’s” more traditionally measured framing come into sharp relief: It does not confront or challenge Miller in any meaningful way.

That’s not something the “Blowback” hosts need be self-conscious about. For all the detail and research packed into the series’ 10 episodes, its perspective is simplistic: The Iraq War was the result of the American government’s capture by bloodthirsty neocons and the contract-hungry military-industrial complex in the wake of 9/11, abetted by the rolling over of a weak and craven “opposition”-in-name-only. The chaos that followed led to the rise of ISIS and the Syrian Civil War, President Barack Obama’s ineffective response to such violence, and the unrest and backlash that led to the election of Donald Trump. Any questions?

If that sounds like a simple recounting of lefty conventional wisdom, it is. Kulwin and James’ narrative is emotionally satisfying and symmetrical: an overconfident American empire, led by glib, hard-charging middle-management types like Rumsfeld, stuck its nose where it didn’t belong, caused mass immiseration and reaped the whirlwind. Its first season both begins and ends with the audio equivalent of its two hosts turning to the camera and delivering their neat characterization of the war’s causes and consequences. There’s a cinematic quality to how they tell the story, with explicit audio references to crowd-pleasing movie classics, and the chatty, impassioned, late-night-party quality of the series creates a sense of community that makes the listener feel privy to a newer, truer American narrative.

That same quality, however, makes the series less revelatory than it is cathartic. For example, “Blowback” is satisfied to gawk at the press’ worst pro-war excesses and excuses, which is funny and authentically shocking in some cases, but ultimately not very edifying as the war cheerleaders are reduced to one-dimensional “ghouls,” to use their frequent term of art. “Slow Burn” ultimately provides more of an unsettling portrait of the media drumbeat for the war. In inviting the reflections of both Cassandras like Danner and the Nation’s Katha Pollitt, as well as reformed hawks, the series makes it terrifyingly apparent to the listener how the whims of personality and motivated reasoning can contribute to a very real body count.

The difference between the two stories is ultimately in what they offer: clarity, in the case of “Blowback,” and nuance, in much of “Slow Burn.” Clarity simplifies the complicated; it galvanizes the cowed or intimidated, it gives ballast to moral instinct. It can also blinker one to the “Butterfly Effect”-like systems of cause-and-effect behind something as vast and amorphous as American public life. Nuance, on the other hand, can reveal the inner nature of such events while providing precious little of the desperately needed instruction about what to do in their aftermath.

That might sound like an analysis better suited for a mid-level rhetoric class than our political discourse. But the conflicts that rend American life today, whether in our schools, political parties, or pop culture, are ultimately about the stories we decide to tell about who we are and how we got here. The immense, Shakespearean tragedy of Iraq means that, like Watergate, it will lace those narratives for decades. How, when, and why we remember it matters, making this podcast skirmish a historical signpost in its own right.