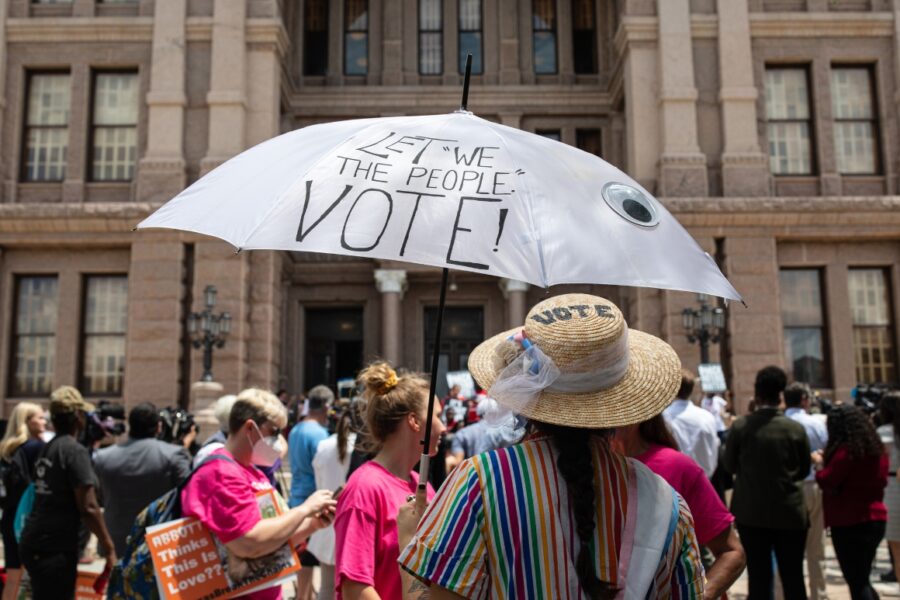 Texas Republicans failed to pass sweeping changes to their state election laws during their legislative session earlier this year, when intra-party squabbling and a last-minute walkout by Democrats in the state House doomed their efforts.

Now, they’re hustling to make sure it won’t happen again during a new special legislative session, teeing up another dramatic fight over voting rights in Texas. But some Democrats are already floating another walkout — hoping to once again rally national attention to the state that could push their counterparts in D.C. to get unstuck on their own stalled election legislation.

“Until [Republicans] decide that they’re going to operate from an American values standpoint of governing, this body, as Democrats, need not show up,” said Democratic state Rep. Jarvis Johnson, who was part of the delegation that visited Washington, D.C. in June. “The only thing that the Republican Party needs from Democrats is to create a quorum. That’s all they need.”

But it isn’t clear if a walkout would be successful a second time. Members on both sides of the aisle have obliquely warned that all options are on the table when it comes to making sure the election legislation does — or doesn’t — become law. But in any event, Republicans intend to move quickly on the elections bill, meaning a would-be walkout would have to last potentially weeks, not hours, to be successful.

Republicans in both chambers introduced elections legislation almost immediately when the special session began on Thursday. The bills contained many similar provisions to SB7, the election legislation that failed earlier in the year, which would have added several new restrictions to voting in the state.

They are looking to move expeditiously. State Senate and House committees both scheduled hearings on election legislation for Saturday morning, and Republican leaders in the state insist it is a top priority after their previous failure. “We are ready to pass all of the legislation on [GOP Gov. Greg Abbott’s] Special Session call starting with #SB1 — Election Security,” Lt. Gov. Dan Patrick, a Republican who is also the state Senate leader, tweeted.

Republicans working on the bills, which are similar but not identical across the two chambers, believe that the party will be able to avoid the infighting that helped doom their attempts during the regular legislative session.

“I think that we have the buy-in of Republicans in both chambers,” said GOP state Rep. Jacey Jetton, who sits on the House select committee overseeing the elections bill.

He noted that because of the negotiations in the regular session, any further talks this time could be expedited. Republicans also hope that a conference committee, where the two bills are merged, and other procedural hurdles don’t slow them down this time.

“There’s plenty of blame to go around on why this wasn’t completed last session. But I think one of the factors, as much at fault as anything, was the ticking of the clock,” said state Rep. Travis Clardy, another Republican on the select committee. “It’s like watching a football game, and the team is moving the ball, but the clock goes to zero before you get it in the end zone. That happens in politics. And so maybe we need to brush up our clock management skills.”

“What’s different here is procedurally, we’re moving forward tomorrow … our third day of a 30 day special session. So we have more than enough time to move it through,” Clardy continued.

Both men said that, depending on if a committee vote is held this weekend, the bill could see the state House floor as soon as next week.

Some of the most controversial provisions of SB7 did not return, at least in the first draft of the bill, such as effectively banning Souls to the Polls events — which are voter drives popular at Black churches — and setting a lower evidentiary standard to overturn an election due to fraud allegations. Republicans have since chalked those up to drafting errors in a time crunch, but the bill’s Senate author defended the Sunday voting restrictions on the floor at the time.

Democrats in Austin are promising to oppose the elections bill throughout the session. They’re also hoping that staging another fight would push congressional Democrats to move on the For the People Act and the John R. Lewis Voting Rights Act. Both bills face dim futures in Washington. Democrats don’t have 50 votes in the Senate on the For the People Act, with Sen. Joe Manchin (D-W.Va.) calling for a smaller package, and both bills would face Republican-led filibusters.

“We’re going to fight with all our might here in Texas. We are holding the line,” said Democratic state Rep. Trey Martinez Fischer, who helped lead the initial walkout and was also in the delegation that visited Washington. “But we need our federal men and women, the United States Senate, to step up.”

Texas Democrats are openly discussing the possibility of another walkout, or some sort of disruption, to try to stop the election proposals in the special session and drum up attention.

“All of those options are on the table,” Martinez Fischer said. “The initial walkout in May was not an exercise in vanity.” When asked if the potential for a longer walkout compared to May changed anything, he answered: “It doesn’t at all. Just an extra pair of socks. The Democratic caucus is more united than ever, and our resolve is pretty strong.”

But Republicans are acutely aware of the threats this time. “My Democratic colleagues have been quoted as saying all options are on the table,” state House Speaker Dade Phelan told KXAN in an interview. “Respectfully, all options are on the table for myself as well.” Phelan’s office did not respond to a question from POLITICO asking to elaborate what those options were, but state House rules do allow the speaker to order the doors locked and the sergeant-at-arms to hunt down missing members, something he did not pursue when Democrats walked out during the regular session.

But angry Democrats are undeterred. “I don’t care if the Republicans know that I’m going to break quorum,” Johnson said. “How are they going to stop me?”