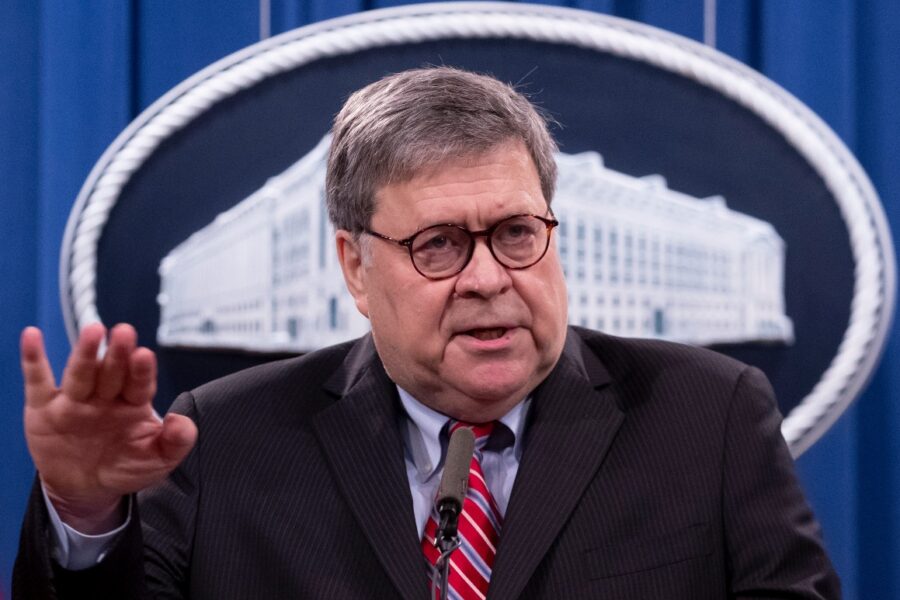 Former Attorney General William Barr pushed back Tuesday against suggestions from former President Donald Trump and a former federal prosecutor in Pennsylvania that federal authorities were ordered not to aggressively investigate claims of fraud during the 2020 presidential election.

Trump declared in a statement sent to reporters Monday evening that the former U.S. attorney in Philadelphia, William McSwain, was blocked from pursuing assertions of election tampering.

“U.S. Attorney from the Eastern District of Pennsylvania was precluded from investigating election fraud allegations. Outrageous!” Trump said in the statement, which was accompanied by a two-page letter from McSwain seeking Trump’s endorsement in the Keystone State governor’s race.

“I wanted to be transparent with the public and, of course, investigate fully any allegations. Attorney General Barr, however, instructed me not to make any public statements or put out any press releases regarding possible election irregularities,” McSwain wrote.

In an interview with POLITICO, Barr — who became a favored punching bag for Trump after the 2020 election — denied ever telling McSwain or others not to pursue fraud allegations related to the vote.

“It’s written to make it seem like I gave him a directive,” Barr said. “I never told him not to investigate anything.”

Barr said he spoke to McSwain Monday after hearing about the letter and that Trump was pressuring the former prosecutor to claim that Barr had bottled up election fraud probes last year. Barr said the former prosecutor indicated he was trying to assuage Trump’s concerns without claiming that actual fraud went unchallenged. 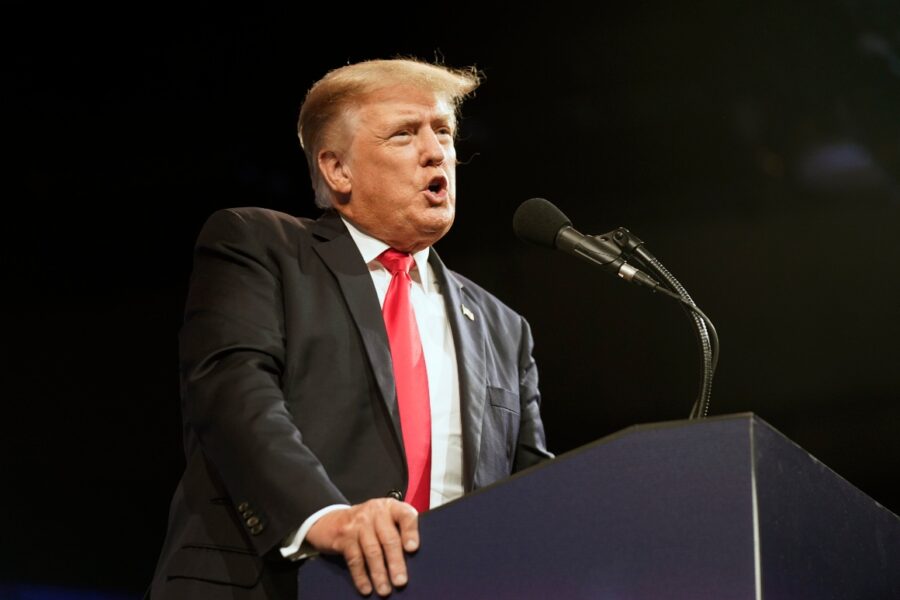 Barr said he warned McSwain against such an approach.

“I said, ‘But you’re trying to give the impression these things were not adequately or fully investigated,’” the former AG said.

Barr noted that six days after the election, he issued a written directive to all U.S. attorneys authorizing them to pursue ballot fraud and vote tabulation irregularities. The attorney general took heat at the time over the order, with liberals complaining that he was bowing to bizarre and nonsensical claims by Trump about voter fraud.

At least one senior prosecutor, the longtime head of the election-crimes branch at Justice Department headquarters, stepped down in protest over the directive.

A new book, “Landslide: The Final Days of the Trump Presidency” by Michael Wolff, claims that Trump directly called several U.S. attorneys following the election to press them to chase after fraud allegations. Among them was McSwain, according to Wolff.

One former official, who spoke on condition of anonymity, said McSwain’s office did aggressively investigate several election-related fraud claims and was given no “stand-down” order from Washington.

Among the reports actively investigated by McSwain and the FBI, the former official said, was that of a York, Pa., contract truck driver for the U.S. Postal Service. He claimed he’d transported as many as 288,000 filled-out ballots from New York to Pennsylvania, but said they disappeared during an overnight stop.

McSwain has told associates that the mention in his letter to Trump about being told to hand off investigations to the Pennsylvania Attorney General’s office refers to the handling of a single complaint, a source familiar with the conversations told POLITICO. That is Navy veteran Gregory Stenstrom’s claim that 47 USB drives went missing during the election process in Delaware County, Pa.

Stenstrom said the drives could have contained as many as 120,000 votes, but local officials insisted that the USB drives were used for programming voting machines and did not contain votes. They also said the existence of secured, paper confirmations of each vote cast meant that any large-scale fraud was impossible.

Barr said McSwain has claimed the instruction to hand off the case to Pennsylvania Attorney General Josh Shapiro came from Richard Donoghue, who was the principal associate deputy attorney general during that period, a source said. McSwain suggests Shapiro couldn’t be trusted because of his comments about Trump. Shapiro also appears to be the leading Democratic candidate for governor, making him a potential opponent for McSwain in the general election.

“Which authority or authorities reviewed a particular allegation turned largely on the nature of the allegation itself,” Donoghue said, noting the overlapping jurisdiction. “In some instances, state and federal authorities referred matters to one another.”

“While I was made aware of allegations relating to conduct in Delaware County, I did not preclude DOJ personnel in Pennsylvania from investigating allegations of criminal misconduct relating to the 2020 elections or direct that any such allegations be handled exclusively by state authorities,” Donoghue added.

Barr said he wasn’t involved in detailed discussions with McSwain about the Delaware County case, but agreed with the general approach Donoghue outlined.

“My position in all of these was they should not get into a fight with the state people. If they’re investigating, they should look over their shoulder, they should talk to witnesses. Don’t get into fights with them,” the attorney general said. “The county was vehement that this was all BS.”

Barr told ABC News reporter Jonathan Karl earlier this year that he pushed officials to pursue many fraud claims despite harboring doubts about them. “If there was evidence of fraud, I had no motive to suppress it. But my suspicion all the way along was that there was nothing there. It was all bullshit,” Barr said, according to Karl’s forthcoming book, “Betrayal.” 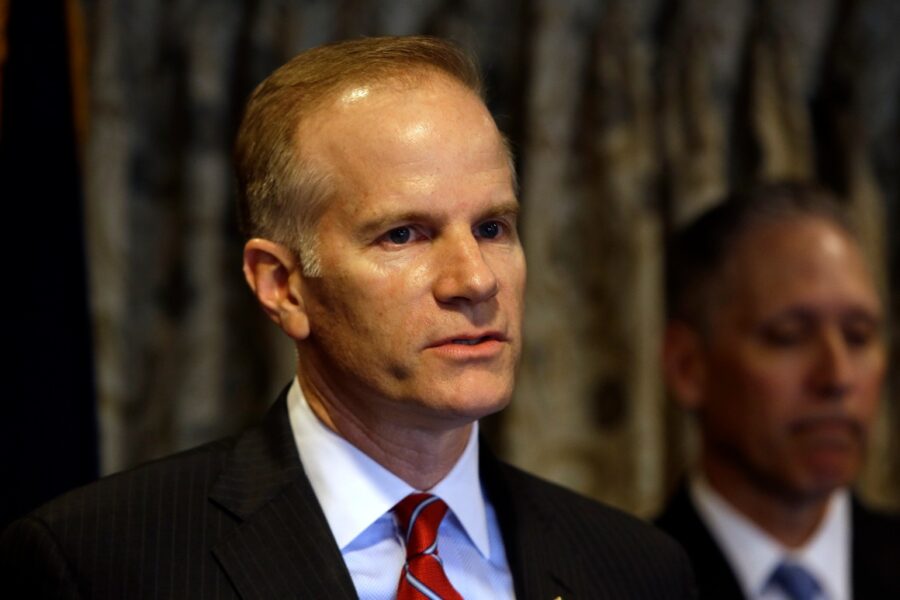 The existence of parallel state and federal investigations in election-related cases is not unusual, a former Justice official said, since election procedures are grounded in state law.

In addition, since federal jurisdiction is limited to allegations of fraud and tampering, the Justice Department has generally left to state officials investigations into irregularities like exclusion of poll watchers or equipment failures, the former official added.

Trump continued to rail at Tuesday at such episodes, many of which prompted litigation in state courts last November.

McSwain faces what could be a crowded field as he mulls a bid for the Republican nomination. State Sen. Doug Mastriano and Rep. Mike Kelly are both considering bids and are seen as more enthusiastic supporters of Trump.

McSwain’s letter is dated June 9, more than a month ago. Trump released it on the eve of a visit to Pennsylvania by President Joe Biden Tuesday to deliver a speech on voting rights.

In a new statement Tuesday morning, Trump argued that Biden is making the trip in a bid to head off a drive by Trump supporters in the Keystone State to initiate a “forensic audit” of the 2020 results. Such an audit has no chance of overturning the election results, but Trump appears to hope it will foster uncertainty about the outcome or produce evidence of fraud that he can use in a campaign to return to the White House in 2025.

“Why are they so concerned that a President, who never goes anywhere, would hop onto beautiful Air Force One and head to Philadelphia if it were an honest election?” Trump said of Biden. “Why not let the audit go forward and make everybody, on both sides, happy? The results will be the results. But they know it was not an honest election…. Let the Forensic Audit go, Joe. Don’t fight it.”