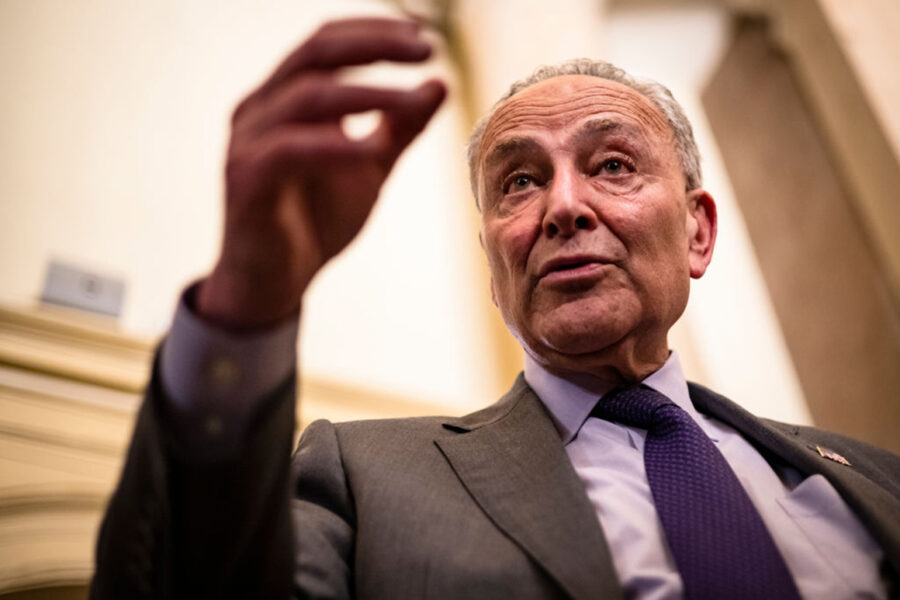 Senate Republicans revolted on Monday against opening debate on infrastructure while a bipartisan bill is still being written, lining up in opposition to a squeeze play by Majority Leader Chuck Schumer.

Schumer and Senate Democrats need at least 10 Republicans to agree to advance a still-unwritten deal to spend nearly $600 billion on roads, bridges and broadband during a vote expected on Wednesday. But both Republican leaders and the GOP lawmakers working on the bipartisan infrastructure package carried the same warning for Schumer.

“He’s not going to get 60, let’s put it that way,” said Senate Minority Whip John Thune (R-S.D.). “The legislation is not drafted, the pay-fors are a long ways away. Patience is going to be a virtue.”

But patience has run thin among Democrats who have watched the bipartisan talks play out for more than three months now. Schumer scheduled the anticipated test vote Monday evening and his deputies and Democratic members of the cross-aisle group made clear they wanted to move forward.

“It’s Monday in the United States Senate. That’s Wednesday. That’s a long way between then and now,” said Sen. Patty Murray of Washington, the No. 3 Democratic leader. “We need a resolution to this. There’s a lot more work to get done.”

Sen. Mark Warner (D-Va.), who is negotiating the bipartisan infrastructure bill, said, “You got to keep the pressure on.”

Schumer said all five Democrats negotiating the bill, including Sens. Joe Manchin (D-W.Va.) and Kyrsten Sinema (D-Ariz.), supported his approach. He reiterated that Wednesday’s vote is part of a “routine process” and that “it’s a sign of good faith from both sides that negotiations will continue in earnest.”

A failed vote this week would amount to an embarrassing setback for the senators trying to clinch an agreement that already got a televised thumbs-up from President Joe Biden. The group planned to meet on Monday evening and try to finish drafting legislation on a topic that’s bedeviled both parties’ presidents and Congresses for decades.

If there’s no finalized deal and the procedural vote fails, senators said they would still continue to work on the infrastructure legislation. But several Republican senators helping shape the bill said they were agitated by Schumer’s tactics and warned they might vote against advancing their own efforts.

“We can’t support cloture for something we haven’t accomplished yet,” said Ohio Sen. Rob Portman, the lead Republican negotiator. “It is absurd to move forward with a vote on something that’s not yet formulated.”

Alaska Sen. Lisa Murkowski, another GOP negotiator, declined to say how she would vote Wednesday. But she added that if Schumer wanted the legislation to succeed, he would ensure “people have an opportunity to actually look at what they might be voting on.” Sen. Mitt Romney (R-Utah), another negotiator, said he’d vote no “if we are still working on major provisions of the bill and we don’t have a bill in front of us.”

Though Portman and others cried foul over holding a vote on unfinished legislation, it’s a tried and true strategy for both parties. Republicans kicked off their drive to repeal Obamacare with a vote on proceeding to an unwritten bill; just this Congress, senators in both parties advanced hate crimes and competitiveness legislation before it was finished.

Yet in this case, Republicans said there’s no rush to make good on an agreement Biden touted beside five of them at the White House. Senate Minority Leader Mitch McConnell said Monday that Republicans “need to see the bill before voting to go to it. I think that’s pretty easily understood.”

“There’s no bill. You can’t expect that many Republicans to move forward on a pretty vague concept,” said Sen. Roy Blunt (R-Mo.). “It’s pretty much up to the majority leader. If he wants to kill the bipartisan bill, insisting on a vote before there’s a bill is a certain way to kill the bipartisan discussion.”

Schumer is portraying the anticipated Wednesday vote as a first step in the debate, suggesting the group’s work could continue and be later added as an amendment. And notably, Schumer telegraphed his move; he’s long warned that he wanted the bipartisan group’s product on the floor in July.

If the bipartisan talks end up fully imploding, Democrats can roll the group’s work into their unilateral spending bill that’s still being written, with a top line price tag of $3.5 trillion. But that would carry its own challenges: namely, keeping in line all 50 Senate Democrats, including moderates preaching bipartisanship.

The bipartisan group of senators writing the bill will meet via Zoom on Monday night to try to produce legislative text for the framework they reached last month, and the White House is expected to participate. Over the past week, Republicans objected to a proposal to increase IRS enforcement to help pay for the infrastructure legislation, sending group members scrambling to come up with new financing plans to fill a hole of tens of billions of dollars in new revenues. Portman said the group had “over two dozen differences” and resolved about half of them.

Despite the time crunch, moderate Democrats are signaling they are comfortable with Schumer’s move.

“I still believe Chuck’s got the right schedule,” said Sen. Jon Tester (D-Mont.). If the vote fails Wednesday, he suggested: “What the hell? Keep us here in August.”

But some in the caucus were less eager to vote Wednesday without legislative text. When asked if Schumer should still hold the vote Wednesday, Sen. Angus King (I-Maine), a member of the group, replied: “If we have the bill, yes.” King added that “if you don’t have the bill, you can’t have a vote.” Still, King will support advancing the bill on Wednesday and supports Schumer’s timeline, his office said.

The Senate is scheduled to break for the summer on Aug. 6, though it would not be without precedent for the chamber to scrap a week or two of that recess to complete its work ahead of fall deadlines for funding the government and raising the debt ceiling.

Schumer has set up this week as pivotal to Biden’s “two-track” infrastructure and social spending plans. In addition to the impending vote on the bipartisan infrastructure framework, he’s also set a deadline of Wednesday for his party to coalesce around a rough outline of $3.5 trillion in new spending for the rest of Biden’s agenda to tackle social programs, climate change and increase taxes on the wealthy and corporations.