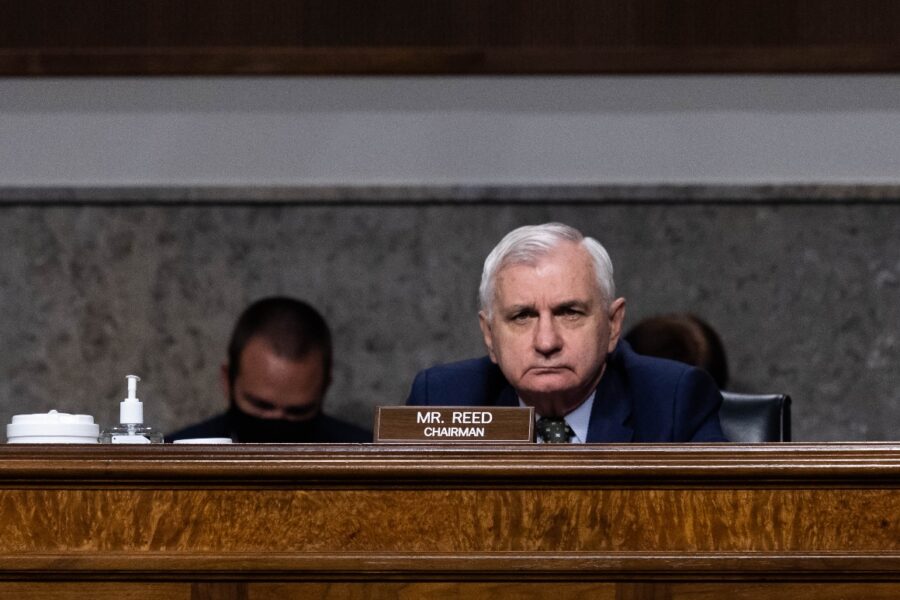 Senate Democrats are proposing a sweeping rewrite of the military draft laws aimed at requiring women to register for the Selective Service System, according to a draft authored by Senate Armed Services Chair Jack Reed and obtained by POLITICO.

The changes to Selective Service could be attached to the National Defense Authorization Act, a defense policy bill that’s one of the few pieces of legislation considered a “must-pass” by Congress. The move would reignite a contentious debate over whether women should be required to register for the draft, a move the House and Senate have each considered in recent years, though the change has never become law.

The language proposed by Reed (D-R.I.) would expand registration for the service to “All Americans,” striking explicit references to males. It’s expected to be considered during committee markup this week; floor action on the bill would wait until later this year. A spokesperson for Reed declined to comment.

Currently, law states that U.S. men must register for the service when they turn 18 for potential military conscription, though no one has been drafted into the military in more than four decades. Men who fail to register for the draft can be fined, imprisoned or denied federal jobs.

Calls to expand the draft to include women have grown in recent years, particularly after the Pentagon opened all combat roles to women in 2015. A congressionally-mandated commission that reviewed the draft also backed the change last year.

Multiple lawsuits have taken aim at the current draft law, alleging it’s unconstitutional. The Supreme Court in June declined to hear a case brought by the National Coalition for Men challenging the male-only draft.

Whether to include women in the draft became the subject of a marquee defense battle on Capitol Hill in 2016. The Senate voted to make the change as part of its annual defense policy bill with the backing of then-Senate Armed Services Chair John McCain (R-Ariz.), despite opposition mostly raised by conservative Republicans.

Making women eligible for the draft won bipartisan support from the Armed Services Committee at the time. Half the panel’s GOP members sided with Democrats against a conservative effort to strip the language, including five who still serve in the Senate — Deb Fischer of Nebraska, Joni Ernst of Iowa, Thom Tillis of North Carolina, Dan Sullivan of Alaska and Lindsey Graham of South Carolina.

The House Armed Services Committee adopted a similar provision, which was later stripped from the bill.

Rather than go forward with the major change, lawmakers compromised by creating an independent commission to study the draft as part of a broader review of how to boost military and public service. In the meantime, the panel’s yearslong study effectively kept further congressional action on women in the draft at bay.

The 11-member panel’s final report, issued in March 2020, backed requiring women to register for the draft, among other recommendations.

“This is a necessary and fair step, making it possible to draw on the talent of a unified Nation in a time of national emergency,” the panel wrote in its report.

Reed, who has backed making women eligible for the military draft, said during a March hearing on the panel’s findings that he hoped the changes would “in large part” be included in the upcoming defense bill.

The draft language is just one of several contentious issues expected to be considered by the Senate Armed Services Committee. In addition, senators are expected to debate a bid by Sen. Kirsten Gillibrand (D-N.Y.) to reform the treatment of military sexual assault and extremism in the military.