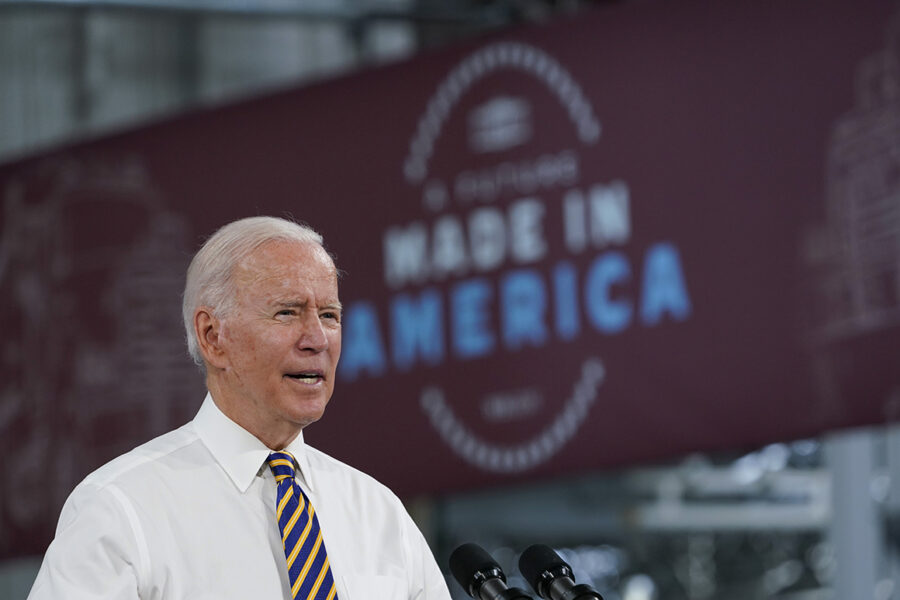 The economy expanded by 6.5 percent in the second quarter of the year, a weaker-than-expected performance that underscores the forces dragging on growth as the U.S. struggles to recover from the crippling Covid-19 pandemic.

While the figure reported by the government Thursday came in well below Wall Street forecasts of 8.5 percent or better, the nation’s gross domestic product has now regained all the ground lost during last year’s business shutdowns, giving President Joe Biden a big boost in his efforts to remake the economy.

Still, the April-June expansion — which mirrored the lower-than-expected job-creation numbers in recent months — could be the high point for Biden, whose presidency is riding on a robust economic rebound.

Some economists have already begun to ease back on forecasts for the rest of this year and 2022 as the Delta coronavirus variant surges, inflation spikes, supply chain issues persist and employers complain about a dire lack of available workers. Even the massive spending plans that Biden is trying to push through Congress, including a potential bipartisan infrastructure deal, wouldn’t provide a short-term jolt for the economy heading into the 2022 election year.

The White House is keenly aware that both the economy’s future and the president’s political fortunes depend on avoiding any significant backsliding on Covid that leads to fresh lockdowns.

“We’ve known since this thing started going around the globe in late 2019 that the most important thing was getting Covid fully under control,” said a person familiar with White House thinking on the economy. “If you don’t, you risk further mutations and going back to square one. It’s everything. It’s the whole ballgame.”

Consumers, who built up savings during the lockdown aided by generous federal stimulus benefits including $1,400 in direct payments from the government, powered the economy forward over the last three months with spending jumping 11.8 percent. Economists still mostly forecast strong growth for the rest of this year and a solid 2022 as more sectors reopen and the labor market continues to recover from the 22 million jobs wiped out by the pandemic.

Biden and congressional Democrats will likely be able to cite a 2021 growth rate of about 7 percent, the highest since Ronald Reagan’s first term and a sharp snap back from the 3.5 percent contraction in 2020.

Some economists nonetheless are curbing their forecasts, in part because of the uncertainty created by the virus and the return to mask mandates in hot spots around the nation. And while the extraordinary economic support provided by the Federal Reserve has inflated asset prices and enriched investors, it has delivered limited benefits for the rest of the economy.

“Rising risks around the Delta variant are likely to push full reopening of the economy into 2022,” said Joseph Brusuelas, chief economist at consulting firm RSM, which advises middle-market companies. “We as economists prematurely declared victory over the pandemic and we are not there yet. And it’s likely to be sometime into next year when we possibly reach that point.”

As recently as a couple of weeks ago, economists generally viewed Covid as fading in the U.S. and expected most activities to return to something resembling normal by this fall. But the rise of the Delta variant in multiple states and the risk of further mutations that could evade existing vaccines have altered those views.

Political conflicts are also standing in the way of a full recovery.

“We are seeing a tremendous misallocation of resources across the economy right now that can do long-term damage,” said Richard Bernstein, founder of Richard Bernstein Advisors. “We are fighting over a relatively limited infrastructure package and whether people should be vaccinated at the same time that you’ve got billionaires flying off into space. It’s pretty bizarre and it’s not sustainable.”

White House officials say that while they are concerned with the Delta variant, inflation and labor market issues, they remain confident in the overall direction of the economy.

“We now have tools that we did not have before to address the new variant both in terms of health and economic effects,” said David Kamin, deputy director of the White House National Economic Council.

Kamin added that the “pandemic combined with supply chain bottlenecks have created some real challenges. But we are obviously focused on doing everything we can to resolve them while making investments to address long-standing weaknesses in the economy.”