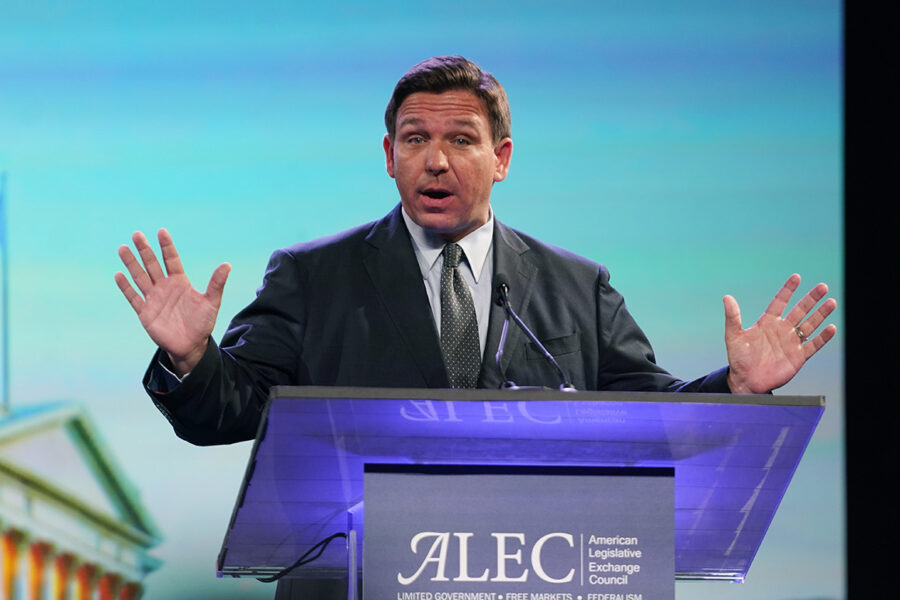 Local officials across Florida are bucking Gov. Ron DeSantis and his anti-mandate coronavirus strategy as infections soar in the state and nation. They’re imposing vaccine and mask requirements for government workers and even declaring states of emergency. In a sign of how worrisome the new Covid-19 surge is, Disney World is ordering all guests over 2-years-old to wear masks indoors at its Florida theme park, regardless of vaccination status.

The new pandemic regulations were announced Wednesday, a day after Florida reported over 16,000 new cases — the highest one-day total since mid-January when the vaccine was not widely available. The local mandates also came as DeSantis reiterated that the state will resist any pandemic-related regulations, even as it remains one of the worst hotspots in America.

“It is very important that we say unequivocally ‘no’ to lockdowns, no to school closures, no to restrictions and no to mandates,” DeSantis said Wednesday night in Salt Lake City, where he was the keynote speaker at a conference hosted by the conservative American Legislative Exchange Council.

The current fight mirrors the clash between DeSantis and local officials that consumed Florida during the pandemic last year, but with a new deadly twist: People continue to resist vaccinations even as the highly infectious Delta Covid variant sweeps through America.

DeSantis raised his national profile last year by declaring Florida was open for business, resisting lockdowns and mask mandates. He used the last legislative session to push for measures that strengthened his hands-off coronavirus approach, convincing the GOP-led Legislature to approve a statewide ban on vaccine passports. He’s also warned lawmakers that he would call them back to Tallahassee for a special legislative session to block the Biden administration if it institutes a nationwide mask mandate for students.

But the current infection crisis threatens to derail DeSantis’ successes ahead of his 2022 reelection campaign and possible bid for president in 2024. Already, Rep. Charlie Crist (D-Fla.) and Agriculture Commissioner Nikki Fried, the two biggest-name Democrats running to challenge DeSantis in 2022, have used Florida’s recent surge to hammer the governor. Crist criticized DeSantis this week for sending a fundraising email focused on claims he would “hold Fauci accountable” while Fried said she will begin hosting regular briefings to update the public on Covid and vaccination rates in the state.

And with no state-level policy response to the recent infection spike, local government officials are rushing to fill the void.

Orange County Mayor Jerry Demings, husband to Democratic U.S. Senate candidate and Rep. Val Demings, has declared a state of emergency and is requiring the county’s 4,200 nonunion workers to get vaccinated by the end of September. Leon County announced it’s also imposing a vaccine requirement for county workers. Miami-Dade Mayor Daniella Levine Cava mandated masks at all county facilities. And in Broward County, school board officials are keeping in place mask mandates for students in the next school year despite DeSantis’ vocal opposition.

“I want to show our residents and visitors Orange County is being proactive,” Jerry Demings said during a press conference this week. “We remain focused on lowering our numbers of hospitalizations.”

The cascade of new local Covid-19 regulations comes months after lawmakers approved a DeSantis-championed law that now allows the governor or GOP-dominated legislature to invalidate local orders, including those tied to the pandemic, if they decide the order “unnecessarily restricts a constitutional right, fundamental liberty, or statutory right.”

Christina Pushaw, DeSantis’ spokesperson, downplayed the response from local governments, saying Orange County’s mayor “is making a recommendation and asking for voluntary compliance, which is not the same thing as a mandate.” She added that recommendations “don’t run afoul of state law.”

She said that private companies like Disney are allowed to institute their own mask policies but reiterated that there could be a special legislative session “to ensure that all Florida school districts are mask optional.”

The schools issue has the potential to be the most contentious. Last week, 6,999 children under the age of 12 contracted Covid-19 in Florida, which was nearly 10 percent of the 73,199 new cases across the state last week, according to the Florida Department of Health, which no longer does daily reporting.

Last week, the positive rate for those under 12 — a segment of the population that can’t get vaccinated yet — was at 15.4 percent, higher than the 15.1 percent average for all ages. A Jacksonville TV station on Wednesday reported that the city’s Baptist Health is treating 13 children who contracted Covid-19, five of whom are in intensive care.

“We are all elected to protect students and employees,” Broward board member Sarah Leonardi said. “It’s my feeling that just because the governor doesn’t want to act in the best interest of his constituents, that does not absolve us from our responsibility.”

But DeSantis has steadfastly maintained that schools should not require students to wear masks, saying at a press conference last week that “we’re not doing that in Florida. OK? We need our kids to breathe.”

In a sign of how nationalized the fight has become, the Republican Governors Association, which has given $3 million to DeSantis’ political committee ahead of his 2022 re-election, has been trying to give DeSantis political cover. On Wednesday, it hit Fried and Crist over what the group says is message inconsistency over Covid-19 regulations.

“It’s going to be a long year watching Nikki Fried and Charlie Crist twist themselves into pretzels as they balance winning over their far-left base with what’s best for the people of Florida,” said Joanna Rodriguez, the group’s communications director.