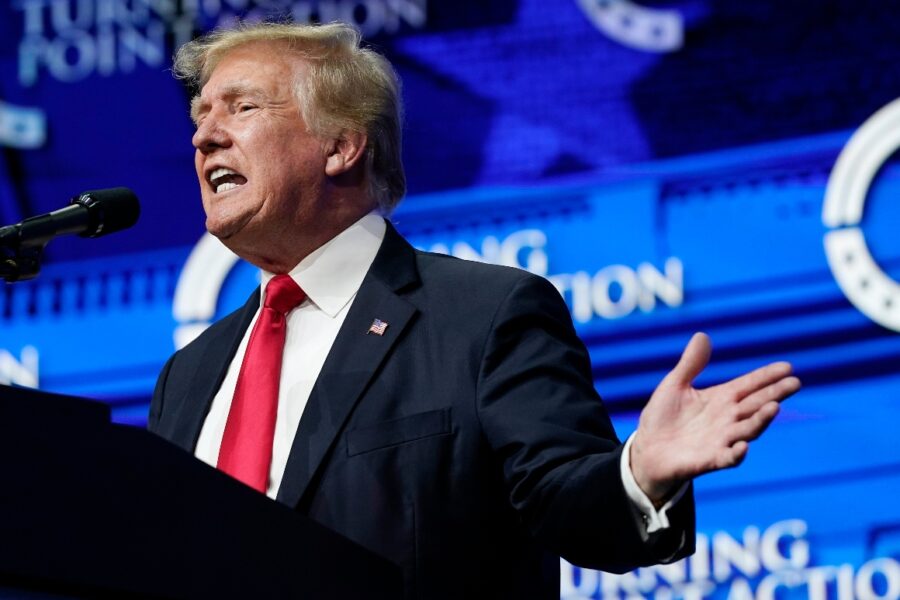 Former President Donald Trump pressured top Justice Department officials to publicly call the 2020 election “illegal” and “corrupt” and “leave the rest to me,” according to handwritten notes released by a House committee on Friday.

Donoghue’s notes detail a Dec. 27, 2020, phone call with Trump and then-acting Attorney General Jeffrey Rosen, in which Trump told the top DOJ officials to “just say that the election was corrupt + leave the rest to me and the R. Congressmen,” according to Donoghue.

It was a reference to the GOP lawmakers whom Trump had enlisted to object to the Electoral College certification of Biden’s victory during a joint session of Congress on Jan. 6, when a mob of Trump’s supporters violently stormed the Capitol in an attempt to halt the proceedings.

“We have an obligation to tell people that this was an illegal, corrupt election,” Trump told Donoghue and Rosen, according to the notes.

The former president also referenced what he called “electioneering fraud,” according to Donoghue, and told the officials: “You guys may not be following the internet the way I do.”

Donoghue and Rosen told Trump that “much of the info you’re getting is false,” adding: “Sir we have done dozens of investig., hundreds of interviews, major allegations are not supported by evid. developed.”

“Told him flat out that much of the info he is getting is false, +/or just not supported by the evidence – we look at allegations but they do not pan out,” Donoghue wrote in his notes.

The House Oversight and Reform Committee released Donoghue’s notes on Friday as part of the panel’s investigation into Trump’s pressure campaign leading up to Jan. 6.

“The committee has begun scheduling interviews with key witnesses to investigate the full extent of the former president’s corruption, and I will exercise every tool at my disposal to ensure all witness testimony is secured without delay,” Oversight Committee Chair Carolyn Maloney (D-N.Y.) said in a statement.

Separately, the panel obtained Donoghue’s notes detailing a Dec. 29, 2020, phone call with a group of White House officials, in which the aides pushed false allegations of election fraud emanating from Italy. The officials, according to Donoghue, said the effort was done “in coordination w/ CIA offices in Embassy” in Rome.

The revelation is likely to factor into other congressional probes, most notably the House’s select committee investigating the Jan. 6 insurrection.

The investigative panels won a significant victory earlier this week when the Justice Department sent letters to Rosen, Donoghue and other potential witnesses informing them that the department will not seek to block their testimony.

It was a stark departure from the Trump-era Justice Department, which routinely intervened on behalf of the former president’s aides and confidants to prevent them from appearing before Congress.

“I appreciate DOJ’s position on [allowing former officials to testify], and it makes the work of the committee that much easier,” Rep. Bennie Thompson (D-Miss.), chair of the Jan. 6 select committee, said on Friday.

Asked about enforcement of subpoenas, Thompson said the committee is “developing a process” for the Justice Department to work on sharing information with the committee, and a staff-level meeting with top DOJ officials is scheduled for next week.

When subpoenas are issued, there would be “quite a few,” he said, though the committee was still determining who would be subpoenaed.