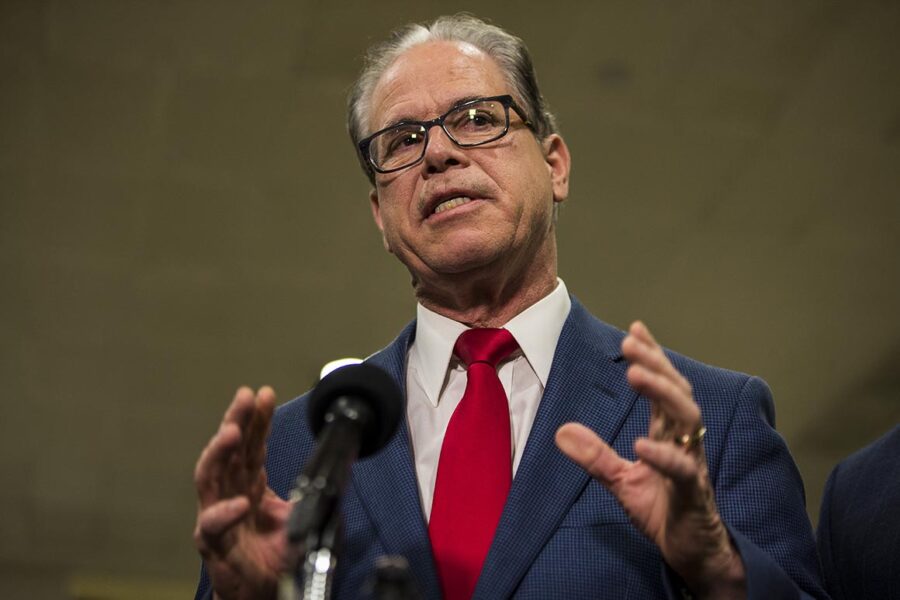 Senate Democrats are speeding to sew up the budget framework that unlocks their multitrillion-dollar social spending plan, hoping to minimize the self-inflicted pain of the impending and arduous process.

Democrats plan to take up the $3.5 trillion budget resolution immediately after the bipartisan infrastructure bill passes the Senate, kicking off the reconciliation process for their massive domestic package that lacks any Republican support. With a slow amendment process on the bipartisan bill and former Sen. Mike Enzi’s (R-Wyo.) funeral scheduled for Friday, the start of budget action will almost certainly cut into August recess.

To lessen the agony, Democrats are expected to exclude a debt ceiling hike from the budget resolution — a significant decision that could appease anxious moderates who aren’t keen on owning the increase. The measure is also expected to bypass a Senate Budget Committee markup, quickening its path to the floor. But senators must still endure the all-night amendment marathon known as a vote-a-rama.

Republicans are conserving their firepower on the bipartisan deal, ensuring their liberal counterparts suffer on their party-line bill.

“I think budget reconciliation is going to be on steroids,” said Sen. Mike Braun (R-Ind.), a GOP member of the Budget Committee. Republicans are still fuming that House Speaker Nancy Pelosi tied the success of the bipartisan infrastructure package to passage of Democrats’ social spending ambitions, he said.

“I don’t think there’s going to be a real robust amendment process here,” Braun said, referring to the Senate voting this week on tweaks to the bipartisan infrastructure accord. “I think all the action is going to be on the reconciliation bill.”

Republicans are committed to either amending the resolution or killing it, “regardless of the time of year and people’s vacation and health care situations,” said Sen. Kevin Cramer (R-N.D.), another Republican on the Budget Committee.

Republican Sen. Lindsey Graham of South Carolina, the panel’s ranking member, announced this week that he tested positive for Covid-19 despite being vaccinated.

Senators will endure at least two vote-a-ramas to enact their $3.5 trillion plan, which is expected to include sweeping new social programs like universal pre-kindergarten, Medicare expansion and two years of free community college, as well as policies like prescription drug reform, clean energy mandates and worker protections.

The first amendment spree is expected to happen as soon as this weekend, culminating with adoption of the budget resolution, which tells a slate of committees to begin crafting the policy bill itself. The Senate will go through another vote-a-rama, likely later this fall, preceding final passage.

Sen. Tim Kaine (D-Va.), a Democrat on the Budget Committee, said he expects the first amendment spree to be bad and the second to be worse, since lawmakers will be deep in the policy weeds at that point.

“The more potent vote-a-rama is when you have the actual work product on the floor,” he said. “I have a feeling that most people will save their powder for that fight.”

With no shortage of amendment opportunities, there is little reason to push the budget resolution through a Budget Committee markup, Kaine said.

“I think we may well just put one on the floor that we all agree with,” he said. “… we don’t need to spend too much time on it in committee, given that everyone will have an opportunity on the floor to try to make adjustments.”

What makes debate on the budget resolution special, and exhausting, is the opportunity for minority party senators to offer as many amendments as they want, unlike the usually restrictive rules of debate on other bills. Sen. John Kennedy (R-La.) said he wishes the Senate held a vote-a-rama on “every single bill.”

“I love vote-a-ramas. I mean, I do,” Kennedy said. “For some of our older members, it’s a hardship. But if they want to do them all night, I’m fine. Amendments and debate are our job.”