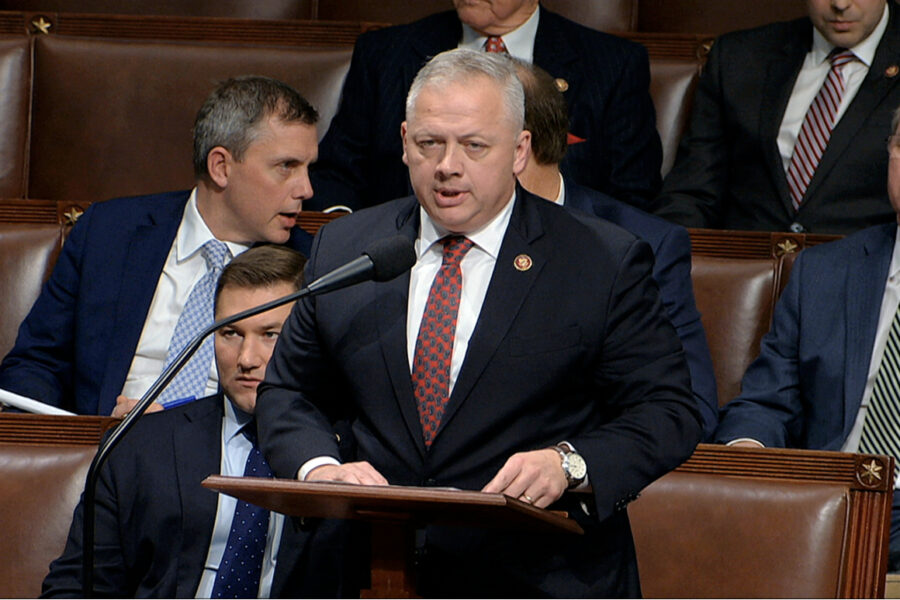 Riggleman brings a background in intelligence and online extremism to the panel having served as a U.S. intelligence officer prior to his time in Congress. Riggleman sought a second term last cycle but lost the GOP primary despite receiving an endorsement from then-President Donald Trump. Since leaving office, Riggleman has become increasingly critical of the former president.

Democrats believe Riggleman’s background will aid their probe as they seek to examine the circumstances surrounding the violent attack by Trump supporters on the Capitol earlier this year, including the actions of the former president and the security breakdown ahead of and during the assault.

The chairman of the select committee, Rep. Bennie Thompson (D-Miss.), confirmed in a release that Riggleman would be added to the panel, an hour after Bloomberg first reported that he is a new staff addition. Two sources closes to the investigation confirmed the move to POLITICO.

“In addition to being a former House colleague, Mr. Riggleman brings a deep background in national security and intelligence matters,” Thompson said.

In a video posted on Twitter Friday night, Riggleman said the assignment may be one of the “the biggest things I’ve ever done in my life. That includes deploying almost 20 years ago right after 9/11.”

“We can’t worry about the color of the jerseys anymore, or whether we have and R or a D next to our name. It’s time for us to look in a fact-based way at what happened on Jan. 6, but to see if we can prevent this from ever happening again in the future,” Riggleman said. “I want to give my word to everybody, that I’m want to do this in a way that’s professional, that’s transparent and that’s ethical.”

Riggleman, who repeatedly said he would serve on the committee if asked, met with Rep. Liz Cheney (R-Wyo.) and staffers of House Speaker Nancy Pelosi last month to discuss the possibility of working with the panel.

Cheney, the first and most high-profile House Republican tapped to serve on the committee, publicly praised Riggleman last month while his name was being considered.

“I think Denver would be tremendous,” Cheney said in a brief interview. “Denver is somebody who’s got years of experience, especially in all the areas connected to cyber issues. And I think he’d just be a tremendous addition to the work of the committee in terms of understanding, recognizing the extent to which social media platforms were used, the communications that went on in the lead up to the 6th.”

Thompson also announced that the panel has hired another staffer who Cheney put forward, Joseph Maher. Maher will be on detail from the Department of Homeland Security, where he serves as Principal Deputy General Counsel.

“Mr. Maher has distinguished himself across his career as a public servant, and I’m grateful to Representative Cheney for recommending that he join our team. These two individuals will provide invaluable insight and expertise as we piece together what happened on January 6th and in the time leading up to it,” Thompson said.

Despite Democrats now being able to tout the involvement of two traditional conservatives — Cheney and Rep. Adam Kinzinger (R-Ill.) — and now Riggleman as an adviser, the findings of the panel are all but expected to be rejected by Trump allies.

House Minority Leader Kevin McCarthy pulled all five of his picks to serve on the select panel after Pelosi rejected two of his key picks: Reps. Jim Jordan (R-Ohio) and Jim Banks (R-Ind.).

The GOP leader and other Republicans have largely blasted the top Democrat’s move, seeking to frame the panel as a partisan ploy designed to hurt Trump and the GOP ahead of the upcoming midterms. They have also pointed to the involvement of three former House impeachment managers and an uneven balance of seats between Democrats and Republicans on the panel as proof it is stacked against them.

But House Democrats and some Republican members have reminded their GOP colleagues that they rejected a resolution seeking to establish a bipartisan 9/11-style commission earlier this year, which came after one of their own, Rep. John Katko (R-N.Y.), struck a deal with Democrats. GOP leaders then began an informal whip operation against the agreement.

Despite this effort, 35 House Republicans still voted to establish the commission. Only two Republicans voted to form the select panel, both of whom now serve at the appointment of Pelosi.

Last month, the committee held its first hearing featuring four members of law enforcement who described the violence and racism they encountered at the hands of the rioters seeking to challenge President Joe Biden’s election win.

Heather Caygle and Myah Ward contributed to this report.