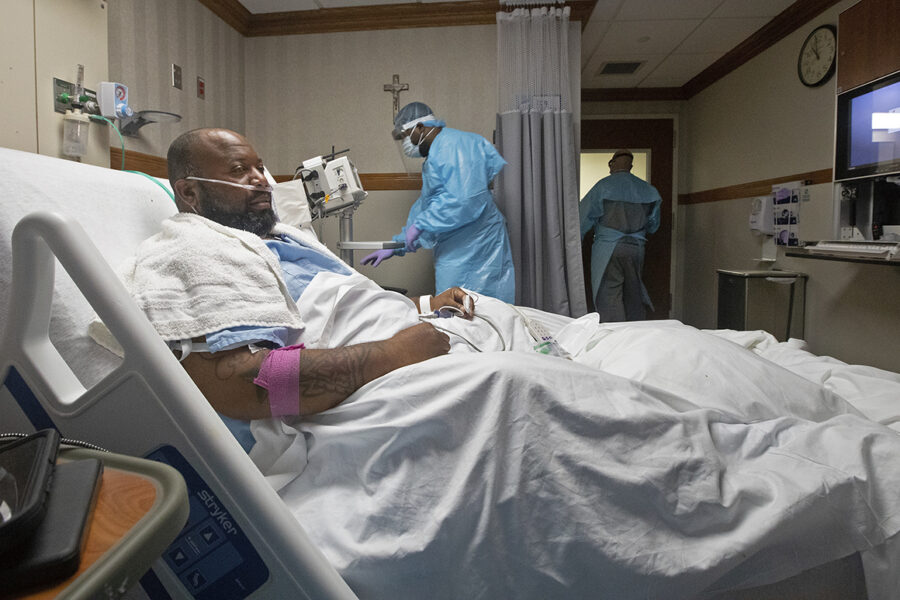 Demand for Covid-19 vaccines is surging in states hardest hit by the Delta variant, but weary public health officials worry the renewed interest will fizzle.

The number of Americans receiving a first vaccine dose each week has nearly doubled over the last month. The largest increases have come in areas where overall vaccination rates are low and hospitalizations and deaths are rising sharply. On July 30, Alabama vaccinated more than 16,000 people — the first time it had cleared that threshold since May. Louisiana, which is experiencing the worst Covid-19 outbreak in the country, has seen the number of doses administered each day quadruple over the last three weeks.

State and local officials in these areas say that fears about the spread of the highly contagious Delta variant, and the risk of death, are finally driving more people to seek out shots — succeeding where months of concerted appeals from pastors, pop stars and politicians have failed.

But whether the recent spike in demand will meaningfully boost vaccination rates, which are still below 50 percent in more than a dozen states, remains to be seen. The newfound enthusiasm for the shots may wane as quickly as it started, depending on how deep the fear of Delta runs and how long the current surges last. Other factors in play include the increasing willingness of employers to issue vaccine mandates and the likelihood that the Food and Drug Administration will issue a full approval of at least one shot — Pfizer’s — in the coming weeks.

Karen Landers, a state health officer in Alabama, doesn’t think hard-hit states are likely to see a reprieve any time soon. The rush for vaccines will help over the long term, but it can take up to six weeks after the initial shot for people to have full protection, she noted. That means it will likely be some time before the number of new infections begins to recede, despite the increased vaccination.

“We’re not going to see that decrease in cases that will give people confidence” that the situation is safe, she said.

The number of people seeking Covid-19 vaccines has risen nationwide in recent weeks, after stalling for months despite a concerted effort by the federal government to encourage inoculation. The country administered 864,000 doses on Wednesday — the highest daily total in a month, said Jeff Zients, head of the White House’s Covid response team.

The factors driving the national trend are varied. Some states, like Minnesota and New Mexico, took President Joe Biden up on the suggestion to offer $100 to people who get their shot. Others like California, Massachusetts and New York are mandating vaccination for certain employees, and some large employers — including Disney, Google and Tyson Foods — have begun to require shots.

But the uptick in demand is highest in states with the worst outbreaks.

“Clearly, Americans are seeing the impact of being unvaccinated and unprotected,” Zients said.

Missouri was among the first states to feel the effects of the Delta variant. As cases there spiked in late June, hospital leaders in the hardest-hit parts of the state began warning the public that their facilities were at or near capacity and running out of ventilators. About three weeks after new infections began surging, the number of vaccinations per day jumped by 50 percent.

Delta then moved south into Arkansas. Cases surged, and about three weeks later, vaccination rates increased by nearly 200 percent, according to a POLITICO analysis.

“I do think it’s people who are scared,” said Joseph Kanter, the state health officer of Louisiana, where about 12,000 people are getting Covid-19 shots each day — up from just 3,000 per day a month ago.“With this much Covid, most people know someone who is sick.”

The same is true in Alabama. Landers said three of her own neighbors died from the virus. “Regrettably, some of the personal loss has been somewhat of a motivator,” she said. “I’m sorry it has to be.”

More than half of unvaccinated people believe the vaccine is a greater risk to their health than Covid, according to a recent poll from the Kaiser Family Foundation. Hearing local doctors recount stories of dying patients, and soon-to-be-widows begging for the shot — only to be told it is too late — may be forcing many to recalibrate their analysis.

“It’s seeing local bodies being driven from the hospital to the mortuary,” said Robert Blendon, a professor of health policy and political analysis at the Harvard T.H. Chan School of Public Health. “It’s suddenly hearing a local physician on the radio talking about people dying.”

Evidence that people are taking this more seriously can also be found in the increasing number of people who are getting tested, said Jose Romero, Arkansas health secretary, who has toured the state with Gov. Asa Hutchinson trying to persuade people to get vaccinated. Many, he said, did not perceive Covid as a serious risk until the hospitalizations and deaths increased.

“People are taking this more to heart now,” he said.

The challenge for state health officials now is trying to sustain the increase in vaccine demand.

Officials in Missouri, Louisiana and Arkansas, all states where the vaccination rate is still well below the national average, worry that the increased interest in the Covid-19 shots won’t last — or that it won’t be sweeping enough to help communities ward off outbreaks when the weather turns cold and people spend more time indoors.

“My big worry is what happens when school starts,” said Kendra Findley, administrator of community health and epidemiology in Springfield-Greene County, Missouri. “I wish we had higher vaccination rates, but at this point it’s a little too late to get people protected.”

“If we as a community do forget,” he said, “we will surely be reminded of it.”

Adam Cancryn and Lauren Gardner contributed to this report.