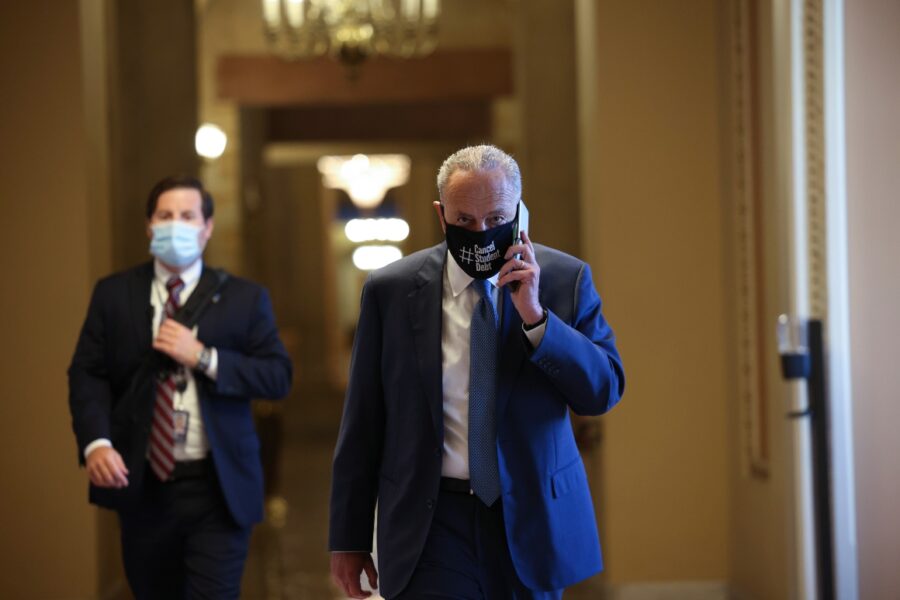 The Senate advanced the bipartisan infrastructure bill on Saturday afternoon, breaking a filibuster to end debate on the deal crafted by a group of 10 senators alongside President Joe Biden.

The vote, which was 67-27, easily cleared the 60 votes needed to move forward. It marked another significant step toward clinching a bipartisan agreement between Biden and Congress. Two Republicans who had previously voted against the bipartisan package — Sens. John Cornyn of Texas and Deb Fischer of Nebraska — voted to advance the legislation.

The timing of the final vote remains unclear and the lead up to it could be excruciating. Disagreements over amendments persisted into the weekend session. And Sen. Bill Hagerty (R-Tenn.) said Saturday he is “not inclined to expedite this process whatsoever.” He added that he’s not holding up amendments but “there’s a normal process, there’s no purpose, in my view, to allow an acceleration of that.”

Senate Majority Leader Chuck Schumer (D-N.Y.) said Saturday evening that he hoped senators could come to an agreement on amendments Sunday, when the Senate reconvenes. Still, the infrastructure bill appeared on a glide path to eventually clearing the chamber, which would hand a win to Biden and the cross-party group of 10 senators who negotiated the bill.

“The Senate will stay in session until we finish our work,” Schumer said earlier Saturday. “It’s up to my Republican colleagues how long it takes.”

Senators in both parties are still seeking to make final changes before the bill leaves the chamber. Cornyn and Sen. Alex Padilla (D-Calif.), for example, want the bill to loosen restrictions on coronavirus relief aid.

“It helps all the states and all the cities and local jurisdictions that would like to have flexibility to spend excess Covid funds on infrastructure,” Cornyn said.

There’s also a brawl over language that would require cryptocurrency transactions to be reported to the IRS, which produced two dueling amendments. One of those amendments — from Sens. Ron Wyden (D-Ore.), Pat Toomey (R-Pa.) and Cynthia Lummis (R-Wyo.) — is endorsed by the crypto industry, and the other — from Sens. Mark Warner (D-Va.), Rob Portman (R-Ohio) and Kyrsten Sinema (D-Ariz.) — got support from the White House on Thursday.

The bipartisan physical infrastructure package includes $550 billion in new spending on roads, bridges, transit, ports, broadband and water infrastructure and is the product of more than a month of negotiations. Although an agreement on the framework was announced in June, final text of the 2,700 page bill was only released this past Sunday.

Schumer reiterated his vows Saturday that the Senate will not leave for the August recess until it passes the bill, along with Democrats’ budget blueprint for a $3.5 trillion social spending package.

While Republicans are likely to oppose the social spending package in lockstep, the physical infrastructure bill has divided their conference. Senate Minority Leader Mitch McConnell (R-Ky.) voted to advance the legislation, saying on Saturday that the bill’s investments were “overdue.”

“Republicans and Democrats have radically different visions these days. But both those visions include physical infrastructure that works for our citizens,” McConnell said.

But many Senate Republicans have criticized the bill’s financing and questioned the purpose of the agreement, knowing that Democrats are planning to move forward on a second partisan package either way. They have been egged on by former President Donald Trump, who has vocally opposed the bill and said Saturday it “will be very hard for me to endorse anyone foolish enough to vote in favor of this deal.”

The Congressional Budget Office on Thursday estimated that the legislation would increase the deficit by $256 billion over ten years. But negotiators argue that the spending will be offset through new revenue and other savings.

Even if the bill passes the Senate in the coming days, it faces uncertain prospects in the House. Speaker Nancy Pelosi (D-Cali.) has said she will not pass the bipartisan package until the Senate delivers on Democrats’ social spending bill.

Saturday’s session marks the second weekend in a row that the Senate has stayed in to finish up the bipartisan agreement. The chamber has considered 22 amendments to the legislation this week.

Following final passage, Schumer is expected to move immediately to a marathon voting session on the social spending bill.

Victoria Guida contributed to this report.