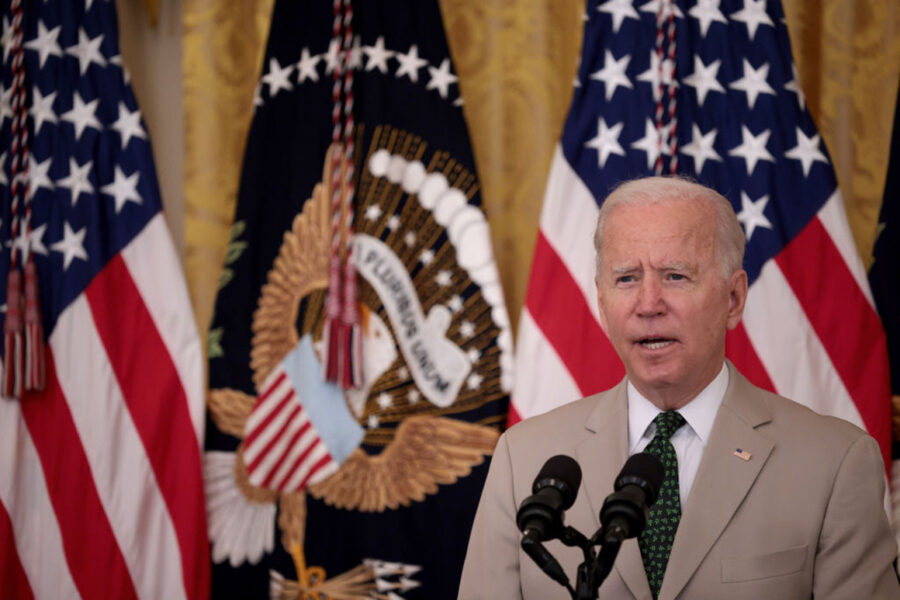 President Joe Biden’s stunning decision to revive the eviction ban in response to intense pressure from progressives has left one of Washington’s most influential business coalitions feeling angry and betrayed on the sidelines of power.

Biden’s move to reinstate a federal eviction moratorium Tuesday after letting it lapse days earlier marked a huge political loss for the National Association of Realtors and its housing industry allies, who each year shower candidates in both parties with millions of dollars in contributions and often get their way in big policy fights.

This time, housing lobbyists said they were frozen out of discussions with the White House on the fate of the ban, which cost property owners billions of dollars a month in losses. More than a dozen industry trade groups found themselves outgunned by an improvised resistance campaign led by Rep. Cori Bush (D-Mo.) and other recently elected progressive lawmakers protesting the ban’s expiration on the steps of the Capitol. House Financial Services Chair Maxine Waters (D-Calif.), who has received tens of thousands of dollars in contributions from the Realtors as one of the top lawmakers on housing issues, dismissed their concerns as she also pushed to revive the eviction prohibition.

“It certainly is a slap in the face to the housing industry and to the people that shelter America,” Howard said.

The eviction ban fight, which is now working its way through the courts, was the latest evidence of a leftward power shift among Democrats that has caused some industry groups to struggle with how to defend their members’ interests in Washington. In the case of evictions, lobbyists even had Biden’s word that the ban was done, only to have the president abruptly backtrack.

Diane Yentel, a top affordable housing advocate who led efforts to convince Biden to revive the ban, said realtors, home builders and apartment associations wasted millions of dollars and goodwill “in a public fight to allow landlords to evict struggling tenants during a historic and deadly global pandemic.”

“These trade associations painted their members in the worst possible light, all while failing over the last year to achieve their goal of overturning the moratoriums,” said Yentel, president and CEO of the National Low Income Housing Coalition.

The National Association of Realtors — the most powerful housing industry group — is more than 100 years old and occupies a headquarters just blocks from the Capitol. It has some of the deepest pockets in Washington, shelling out nearly $700 million to influence policy since 1998, according to data compiled by OpenSecrets. The spending puts it behind only the U.S. Chamber of Commerce.

With real estate interests in every district, the Realtors group is accustomed to not being so easily dismissed. It successfully pressured lawmakers to preserve a tax deferral benefit known as like-kind exchanges in the 2017 tax reform law, and jammed up an attempt to overhaul National Flood Insurance Program rates for homeowners the same year. Carried interest is still in the tax code despite multiple attempts to kill it, in large part because it’s important to real estate investment partnerships.

The association took the lead on fighting the eviction moratorium after the Centers for Disease Control and Prevention first imposed it in September. About 28 percent of the group’s 1.4 million members rent out property, meaning they would be prevented from kicking out tenants who fell behind on rent under the ban. The CDC argued the moratorium was needed to avert public health risks from people crowding into homeless shelters or doubling up with friends and family during the pandemic.

The moratorium posed a financial hardship for landlords who still had to pay their own bills, including mortgages, property taxes and utilities.

Local chapters of the association sued to block the ban late last year. The industry also successfully lobbied for federal rental assistance that would help make landlords whole and keep renters in their homes, though only a fraction of the $46.5 billion has reached its intended recipients thanks to state and local bottlenecks.

The industry’s fight appeared to bear fruit in late June. After the Biden administration extended the moratorium for what it said was the final time — until July 31 — a Supreme Court ruling triggered by Realtor lawsuits bolstered the legal case against the ban. The high court kept the prohibition in place in a 5-4 decision but conservative Justice Brett Kavanaugh said he was only backing the ruling because of the upcoming expiration date. Kavanaugh warned that he believed the CDC had exceeded its legal authority by imposing the moratorium.

The Supreme Court ruling prompted the Biden administration on July 29 to announce that it would let the moratorium expire three days later and that it was up to Congress to renew it.

The last-minute announcement set off a scramble by House Speaker Nancy Pelosi and other Democratic leaders to pass legislation before representatives left for their August recess.

The push triggered fierce pushback by the housing industry, with 14 groups representing property owners, developers and lenders urging lawmakers to “end the unsustainable nationwide federal restrictions on property operations” and instead focus on accelerating the distribution of rental aid.

The lobbying appeared to pay off, after more than a dozen House Democrats privately resisted legislation extending the ban and stopped it from getting a vote. But the episode also revealed a growing rift between housing lobbyists and top Democrats.

“Now I know that there’s a strong lobbying effort, and the Realtors have come, and they have put a strong letter out last night, and some people are simply saying, ‘Oh my God, I don’t want to cross the Realtors,’” Waters said July 30 as she tried to rally support for the ban.

Waters urged her colleagues not to be cowed by interests she knew well. “They’re in my committee, I work with them,” she said, referring to her committee’s jurisdiction over housing policy.

The Realtors’ PAC contributed nearly $2 million to House Democratic candidates in the 2020 election cycle, including $10,000 apiece to Waters and Pelosi.

After the Hill deadlock, the White House stood its ground for a few days. But Biden relented after facing intense pressure from fellow Democrats to reverse course, with progressives led by Bush attracting national attention as they camped out for several days on the Capitol steps to protest the lapse of the ban.

The CDC on Tuesday announced what the administration called a targeted eviction ban, which would apply only to areas with high levels of Covid-19 transmission — currently about 80 percent of counties.

The process left landlords feeling like “pawns” who had been sacrificed to keep the Democratic caucus together, National Apartment Association President and CEO Bob Pinnegar said.

Cindy Chetti, senior vice president at the National Multifamily Housing Council, said the odds were stacked against the industry as outrage over the ban’s expiration snowballed.

“We did lobby a lot, we did step into gear,” Chetti said. “I’m not sure there’s anything else we could have done. … I feel comfortable that we did everything we could.”

The Alabama and Georgia chapters of the Realtors association sued Wednesday to block the ban. The same groups led the legal challenge against the prior moratorium, prompting the Supreme Court to cast doubt on the CDC’s authority.

A spokesperson for the Realtors pointed to last week’s quashed House vote when asked whether the group saw the new eviction ban as a lobbying loss.

“When House leaders launched an effort to extend the moratorium legislatively last week, our members reached out to Congress and made their voices heard,” Realtors spokesperson Patrick Newton said. “The votes in Congress never materialized, which is why the issue is back in the courts.”

Some housing lobbyists said they were angry about being beaten by progressive upstarts and affordable housing organizers on one of the most critical fights for their members in years. The ban’s reimposition threatened to spur big financial losses for landlords, including mom-and-pop property owners who lobbyists pointed out were in nearly every district.

“Those people, for the last year and a half, have kept their tenants housed with their own money,” said Howard, with the home builders association. “And they’re being cast as villains in this.”