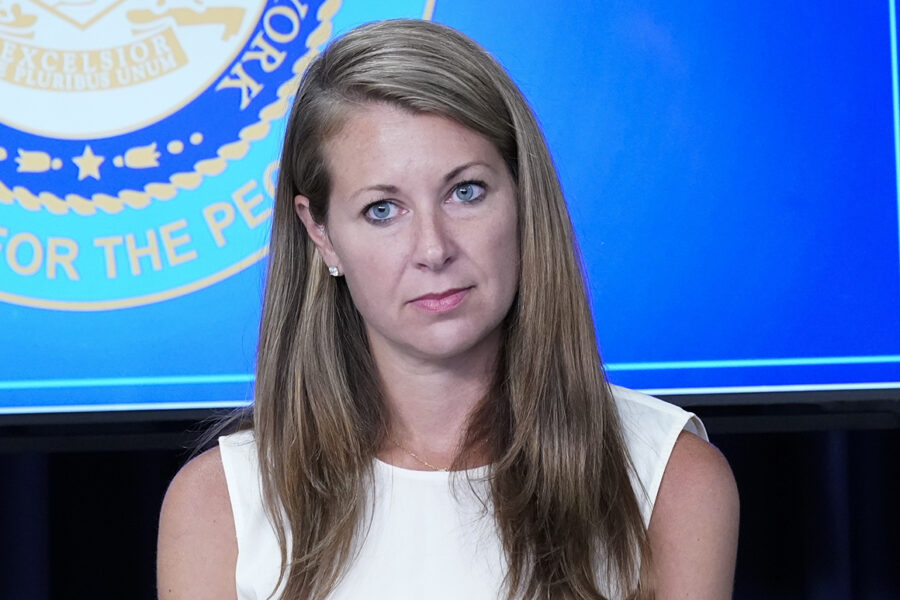 ALBANY — Melissa DeRosa, the top staffer to Gov. Andrew Cuomo since 2017, has resigned.

It’s undoubtedly the most significant loss for the Cuomo administration, even at the end of a week in which the governor has been condemned by everybody from the president to the state legislators who now have the votes to impeach him.

DeRosa has been widely viewed as Cuomo’s most trusted adviser and gained national fame when she occupied the seat next to him at last year’s pandemic briefings.

“Personally, the past 2 years have been emotionally and mentally trying,” DeRosa said in a statement first provided to NY1 on Sunday night. “I am forever grateful for the opportunity to have worked with such talented and committed colleagues on behalf of the state.”

DeRosa was a prominent figure in Attorney General Tish James’ report corroborating allegations of sexual misconduct made against Cuomo.

According to the report, she coordinated a group of current and former staff members as they planned their defense — which James labeled retaliatory — after Lindsey Boylan first accused Cuomo of sexual harassment in December. Multiple women testified that she contributed to the hierarchical culture of bullying, fear and retaliation in the executive chamber that prevented them from coming forward with their accusations or believing those claims would be taken seriously.

Prior to the sexual harassment claims, she was linked to the first scandal Cuomo faced earlier in the year over his administration’s handling of the pandemic in nursing homes. She told state legislators that the administration “froze” when they thought the Trump administration was probing their Covid-19 response. That led to allegations that she and the governor had obstructed justice.

The 38-year-old started as communications director in 2013 and became the governor’s secretary in 2017. That role is the most powerful unelected office in state government.

During the height of the pandemic in New York, she was more present on Cuomo’s briefing stage than even the state health commissioner. She received flattering profiles in outlets such as ELLE and The New York Times, and was photographed for a glossy magazine on the steps to the state Capitol.

She is also the daughter of a chief Albany lobbyist for the influential Bolton-St. Johns firm. She played a key role in developing Cuomo’s defense, but was one of the few people to have standing to confront the governor about his actions.