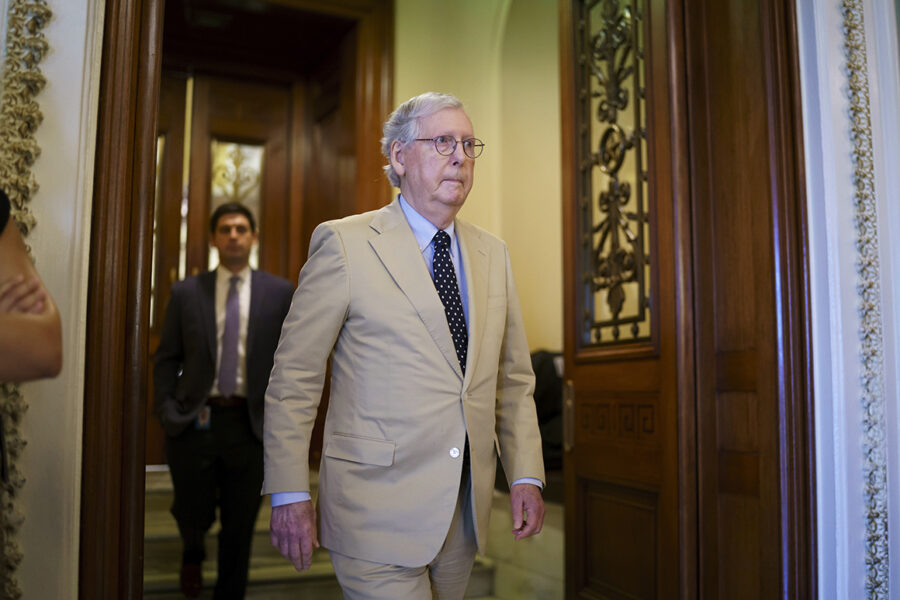 What happens when a cataclysmic deadline hits an immovable object? Congress is about to find out when a looming credit crisis meets Mitch McConnell.

With the threat of default on the nation’s $28 trillion debt awaiting this fall, Democrats are going ahead with plans to exclude raising the federal borrowing limit from their party-line $3.5 trillion budget bill. Instead, they are counting on the Senate minority leader to provide them the GOP votes they need to overcome a filibuster and avert economic disaster.

But McConnell is not budging. In fact, the Kentucky Republican is as dug-in as can be, according to advisers and colleagues. McConnell said in the Capitol Monday that nothing will change his mind: Democrats “have every opportunity to raise the debt ceiling that covers the reckless spending bill. And they will.”

It amounts to a dare for Democrats: Either they pass a debt increase on party lines or potentially own the toxic politics of a credit default as Republicans stand on the sidelines. But Democrats are betting Republicans will have a different view in a few weeks, declining to explain how they will overcome GOP resistance but instead predicting McConnell’s side will blink. The result is a dangerous game of fiscal chicken between the parties’ leadership.

Senate Majority Leader Chuck Schumer “doesn’t need a single Republican vote, and I think he should move forward with that information,” said Sen. Thom Tillis (R-N.C.). “If he fails, I do think he’ll own it. Hopefully they’ll understand.”

Democratic aides said the party would likely combine increasing the debt ceiling with a stopgap spending bill that’ll be required to avoid a shutdown at the end of next month. The House will likely take up and pass the combo measure first, then ship it off to the Senate, where Democrats are counting on enough Republicans to join them to head off the looming fiscal disaster.

“I am predicting, with absolute certainty, it will resolve itself uneventfully. Because it always does,” said Sen. Brian Schatz (D-Hawaii).

Congress last flirted with a default a decade ago, a skirmish that earned a credit downgrade and rattled financial markets. But since then, the House and Senate haven’t barreled quite as close to a deadline that can cause massive market losses and uncertainty that could slow down President Joe Biden’s economic agenda.

This time, it’s not just the usual GOP suspects coming out early against an increase in the debt ceiling. Sen. Susan Collins (R-Maine) said in an interview she has “grave reservations” about raising the debt ceiling amidst Democrats’ multitrillion-dollar spending plans. If the moderate Mainer isn’t committing to raising the borrowing limit, that doesn’t bode well for Biden’s party.

“It’s the perennial debt limit dance. And what’s ironic is, a lot of the debt we’re being asked to account for was accumulated on Donald Trump’s watch,” said Rep. Gerry Connolly (D-Va.).

“At that time it was all four hooves and snouts in the trough,” Connolly added. “So for Republicans to suddenly take a hands-off, ‘we don’t believe in debt’ posture, gives hypocrisy a bad name.”

The September pileup is poised to include more than the government funding that expires at the end of next month, right when the Treasury Department will begin running out of using “extraordinary measures” to keep the country from defaulting. A host of other programs are expiring this fall — including an eviction moratorium that caused a massive headache for House leaders just last week — a confluence of pressure that will bear down hard and fast on congressional leaders.

And the Senate is about to go out on a recess until mid-September, leaving little room to maneuver.

Despite the drama, senior Democrats are unmoved by McConnell’s position against providing the votes to raise the debt ceiling. Washington Sen. Patty Murray, the No. 3 Democrat, observed: “Nobody wants to be responsible for a major economic disaster. So my guess is in the fall, he won’t be saying that.”

Meanwhile, Senate Budget Chair Bernie Sanders (I-Vt.) was carrying around a passel of old McConnell quotes on Monday, ready for the question.

“Look what I have right here: These are all the quotes of Mitch McConnell, who has said, ‘We will never have America default.’ And he’s right,” Sanders said. “At the end of the day, Republicans understand that in the midst of Covid and climate change, they’re not going to destroy the economy.”

Democrats could always change course and amend their budget resolution to include the debt ceiling on either the House and Senate floors. They could even revisit the issue in September. But Murray, who serves on the Budget Committee, said her party had no plans to do that.

Treasury Secretary Janet Yellen endorsed the Democratic position on Monday morning, calling for “increasing or suspending the debt limit on a bipartisan basis.” She also noted how much debt was accrued under the former president; Trump cut taxes and also endorsed spending increases.

Still, after passing a $1.9 trillion coronavirus bill, a $550 billion infrastructure bill — plus plans to pass a $3.5 trillion social spending bill — Democrats are nearing $6 trillion in new spending. Only some of it is paid for with new revenues.

Yellen’s statement came after a debate among Democratic leaders and the White House last week over how to handle the politically tricky issue. Ultimately they decided not to further complicate the $3.5 trillion social spending plan, which the White House sees as a key part of Biden’s legacy as president, according to Democrats familiar with the discussions.

The GOP’s gear-shift from bipartisanship into brinkmanship is also dizzying: McConnell and more than a dozen other Republican senators just vaulted Biden’s infrastructure deal over a filibuster, giving him a huge win. But now that Democrats are pivoting toward their social spending agenda, Republicans are hunkering down for a debt fight with major consequences.

“We’ve seen that movie before, but we’ve never seen anything quite this dramatic,” said Sen. John Cornyn (R-Texas), who is close to McConnell. “They want to spend $3.5 trillion more; I don’t think it’s unreasonable to say they have to raise the debt ceiling themselves. And then bear the responsibility for it.”

If they can, Democrats want to avoid passing both two massive spending bills this year as well as lifting the debt ceiling on party lines — which would give Republicans an easy chance to paint them as profligate on the campaign trail. But whatever their final strategy, Democratic leaders will need to reassure skittish moderates who fear that the upcoming midterms will be defined by GOP attacks ads branding them as “tax-and-spend liberals.”

Some early Democratic polling has shown inflation to be a rising issue with voters, and many of the party’s vulnerable lawmakers are privately concerned that voting for a $3.5 trillion social spending package could exacerbate the problem. And if Republicans aren’t forced to assist with the debt limit vote, moderate Democrats fear they could be forced to own it.

The very prospect of such a debacle is raising another age-old wish among Democrats: Get rid of the debt limit once and for all.

“What we ought to do is raise it a gazillion dollars. Just get rid of the damn problem,” House Budget Chair John Yarmuth (D-Ky.) said in an interview. “The debt ceiling is ludicrous. It’s a horrible law.”