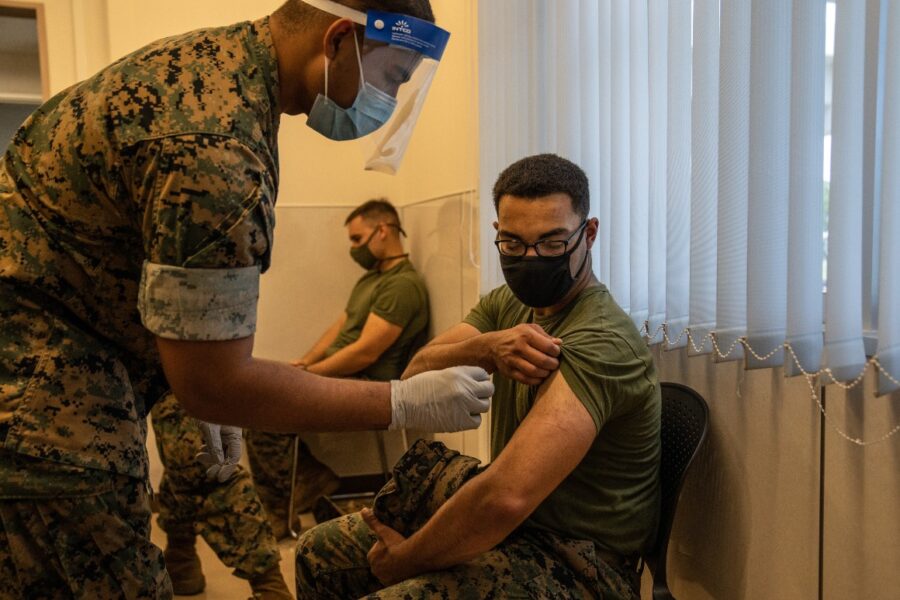 Now that the Pentagon has said it will start requiring service members to get the Covid vaccine by mid-September through either a presidential waiver or approval from the Food and Drug Administration, what happens if troops refuse?

Those military members should expect a range of penalties for doing so, military law experts said, ranging anywhere from a reprimand to confinement and getting kicked out of the military.

The vaccine mandate from DoD, which could be implemented sooner based on infection rates, is expected to be a lawful and enforceable order, especially if it begins after the FDA approves the available vaccines.

“It’s not a lawful order if it doesn’t serve a government purpose, if it is unconstitutional — such as an order to incriminate yourself, or if it directs you to commit a crime,” said military justice attorney Eugene Fidell, who is counsel at Feldesman Tucker Leifer Fidell and an adjunct professor at the New York University School of Law.

Once the FDA approves the available vaccines, “there is no defense” that the order would be unconstitutional, noted Fidell, who also expects a presidential waiver to carry the same level of authority.

“I think that would be sustained. And people who refuse the shots at that point will be in trouble,” he added.

But that doesn’t mean military personnel wouldn’t try to use a presidential waiver-induced mandate as a defense for refusing vaccination.

“I absolutely foresee service members potentially filing suit and seeking injunction precluding them from having to get the vaccine,” said Carol Thompson, a partner at the Federal Practice Group who specializes in military law. “I think the key issue for the military is that it’s still not FDA-approved and the Emergency Use Authorization seems to have been abused.”

If a service member refuses an order to get vaccinated, then their commander can issue an administrative reprimand or a non-judicial punishment, often referred to as an NJP, explained Thompson.

Administrative reprimands are essentially written complaints that go in a service member’s permanent file and can affect promotions or career advancement. NJPs vary by a service member’s rank, status and experience, and range from a lowering in rank or a reduction or suspension in pay to an honorable or other-than-honorable discharge. These are all punishments that would take place outside the courts.

An enlisted member’s refusal to carry out a lawful order is a violation of Article 92 of the Uniform Code of Military Justice and punishment includes a dishonorable or bad-conduct discharge (an officer would be dismissed), two years confinement, and forfeiture of all pay and allowances, Fidell said, noting resignations could occur as well.

In 1998, the military rolled out its Anthrax vaccination program, though the vaccine was not approved by the FDA until 2002. One airman’s refusal to take the vaccine is now the leading case — U.S. vs Washington — for vaccine refusals in the military. It went all the way to the U.S. Court of Appeals for the Armed Forces, where the program was upheld and the airman, Christopher Washington, was convicted of willfully disobeying a lawful order given by a superior officer and sentenced to a bad-conduct discharge and confinement for two months.

There is a precedent for a service member to seek a preliminary injunction from a federal district court before getting vaccinated. Thompson pointed to the 2003-2004 case of John Doe #1 vs Rumsfeld, where Judge Emmet Sullivan issued an order preventing service members from taking the anthrax vaccine. Sullivan ultimately ruled the military can’t require service members to receive the vaccine.

The Anthrax vaccine is required only for troops that are deployed to high-risk locations, like the Korean Peninsula, and other designated units.

However, a key distinction between the two anthrax vaccine cases and any potential case with refusing a Covid-19 vaccination is that the anthrax cases dealt with a serious infectious disease that is not contagious.

James Klimaski, who practices military law and is the principal at Klimaski & Associates, P.C., said it is unlikely service members who refuse a required vaccination will remain in the military long-term.

“It’s not gonna work. They can try to resign, whatever it is, but they’re not gonna stay in the military,” he said. On a potential choice between vaccinations or frequent testing, Klimaski noted the option is more favorable for agencies where remote work is more common.

“That might work for Department of Agriculture or Commerce, or something or other that have people who are working at home anyway. But in the military, no,” he said.