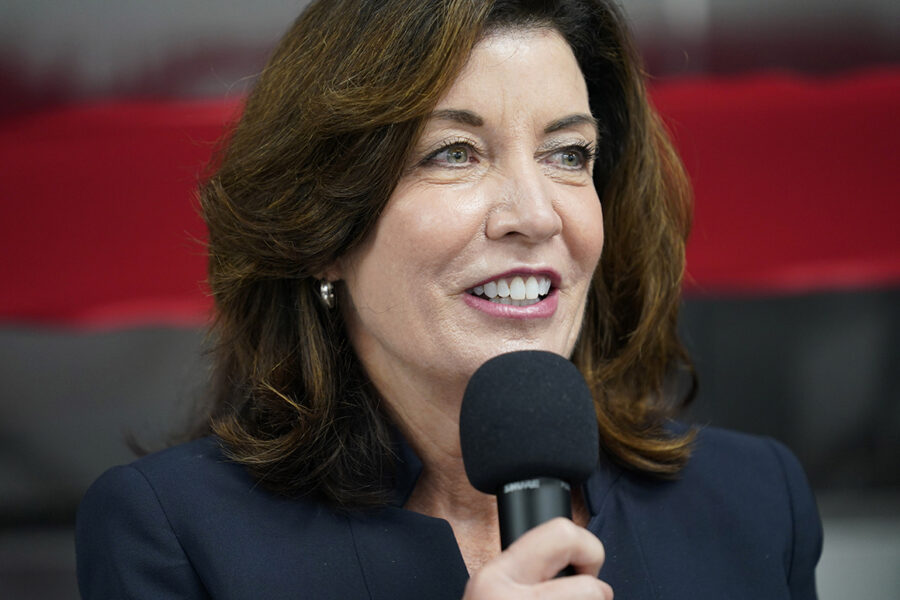 ALBANY, N.Y. — New York Lt. Gov. Kathy Hochul spent the afternoon of Aug. 11, 2020 welcoming the Toronto Blue Jays to play in Buffalo where they were stranded by the pandemic.

With Gov. Andrew Cuomo on Tuesday announcing his resignation effective in two weeks, Hochul will soon become the second recent lieutenant governor to assume the state’s top post after accusations of an incumbent’s sexual misdeeds. (Eliot Spitzer quit in 2008 after reports that he was a client of a prostitution ring.) Hochul will hold the position for the remainder of Cuomo’s third term, which expires at the end of next year.

“I agree with Governor Cuomo’s decision to step down. It is the right thing to do and in the best interest of New Yorkers,” Hochul said in a statement. “As someone who has served at all levels of government and is next in the line of succession, I am prepared to lead as New York State’s 57th Governor.”

Hochul, 62, may not be a household name like her boss, who disputed the attorney general’s report corroborating allegations of sexual harassment from 11 women just before saying he would resign. But in many ways she has been the most visible elected official in New York since she assumed her current role six years ago. She is renowned for putting in grueling hours cutting ribbons, campaigning for down-ballot Democrats and cheerleading for upstate businesses.

The Buffalo native has been gradually distancing herself from Cuomo since allegations of sexual harassment first surfaced. She’s stopped mentioning him directly at public events and has her own public schedule sent out.

After the James report dropped last week, Hochul released a statement saying it “documented repulsive and unlawful behavior by the Governor towards multiple women.” She deferred to the Assembly, which has been edging closer toward impeachment by the day, and said it would not be appropriate for her to weigh in further given her place in the line of succession.

Cuomo, in announcing his planned resignation, praised Hochul’s abilities and said she would quickly be ready to address the resurgence of the Covid-19 virus.

“Kathy Hochul, my lieutenant governor is smart and competent,” he said. “This transition must be seamless. We have a lot going on. I’m very worried about the Delta variant and so should you be, but she can come up to speed quickly.”

A source close to Hochul says she “has been receiving phone calls from folks across the state, colleagues, friends, state legislators, agency heads. They’re all offering their advice and she is listening. It’s a clear reflection of the strong relationships she’s been building over time.”

She hasn’t spoken with the governor since February, the source said. Her last public appearance with Cuomo was at a Covid briefing in Buffalo at the end of January.

Hochul has a fine line to walk as she prepares to take the helm amid a resurgent wave of the pandemic: emphasizing her exclusion from Cuomo’s inner circle while touting her leadership credentials. Republicans and conservatives are already launching attacks questioning what she knew about the governor’s misconduct and his coverup of nursing home deaths, presumably preparing for the possibility that she could win the Democratic nomination in the coming gubernatorial race.

Gerard Kassar, the chairman of the state’s Conservative Party, called for Hochul to get briefings from the governor’s office to prepare to take over the machinery of state government.

“Hochul must also be prepared to explain how Gov. Cuomo’s toxic work environment, especially toward women, was allowed to fester during the seven-plus years she served as Mr. Cuomo’s partner in government,” he continued in a statement. “It’s impossible to believe that Ms. Hochul was unaware of this dynamic in the Executive Office. This is a natural line of inquiry, and we expect members of the news media to pursue it.”

“Her work speaks for itself,” Zellner said, citing her election as chair of the National Lieutenant Governors Association and campaigning for women around the state. “She’s done this stuff outside the bubble of the governor and built her own relationships out there.”

He said Hochul would be fully prepared to take over the governor’s duties. “She did not take this job lightly,” he said. “She’ll be prepared, she’s one of the hardest workers I’ve ever seen.”

“She is probably one of the most down-to-earth people that you could ever meet,” said Assemblymember Karen McMahon, a Democrat whose district borders Buffalo. “She’s gone to great heights in government, yet one-to-one, she is so accessible and so warm and just a very generous person … She’s always able to help — particularly women, too.”

Hochul first garnered attention outside her Western New York base in 2007, when she was one of the most vocal opponents of Spitzer’s plan to let undocumented immigrants obtain driver’s licenses. She was then the clerk of Erie County, and she vowed to have any such applicants arrested.

She has since changed her position. “I was an elected official in Erie County, and I represented the people of that district,” she said in 2018, referring to one of the more conservative regions of New York state. Still, that position and the “A” rating she received from the National Rifle Association as recently as 2012 suggest the political problems she will face if she does indeed become governor and chooses to run for a term in her own right next year. The Democratic Party’s left wing has never really trusted her.

State Democratic Committee Member Émilia Decaudin, a progressive from Queens, said Hochul would not be among her top choices for governor. But she noted that most people have “had nothing but pleasant interactions” with her, and she’d be willing to give her a chance: “The idea of having somebody who’s more personable and not Cuomo is appealing to me.”

Hochul was given an opportunity to win higher office thanks to the misconduct of a male politician about a decade ago. Republican Rep. Chris Lee was caught soliciting women on Craigslist, where he described himself as a “fit fun classy guy” — he included a picture of himself, shirtless — and said he was a divorced lobbyist. He was married at the time, and he quickly resigned.

Hochul entered a special election to succeed Lee and wasn’t given much of a chance. The district had been a Republican stronghold since the days it was held by future GOP Vice Presidential nominee Jack Kemp. But Hochul won the seat in a race Democrats characterized as a referendum on the House GOP’s plans to privatize Medicare.

Her time in Congress didn’t last long. The district became even more Republican after the 2012 redistricting, and she lost to Chris Collins, who would go on to become the first incumbent member of Congress to endorse Donald Trump. He later resigned and pleaded guilty to securities fraud and received a pardon from Trump during his administration’s final days.

After a brief stint working in government relations for a bank, she was selected by Cuomo to be his running mate when he sought a second term in 2014. Hochul was seen as a play for more votes in Erie County, which Cuomo lost in 2010.

“History shows lieutenant governors are not picked because they can step in to become governor but because they check an electoral or a political box,” said Bob Bellafiore, a former journalist and aide to Gov. George Pataki.

Since becoming lieutenant governor, she has been best known for her demanding travel schedule — she’s the only New York politician besides Sen. Chuck Schumer who makes a habit of appearing in each of the state’s 62 counties every year; sometimes twice.

She’s sometimes been chided for her dedication to touring the state, often promoting Cuomo’s agenda. New York City Public Advocate Jumaane Williams made a strong showing against her in a Democratic primary in 2018 as he promised to turn the office into one that’s more active on independently shaping state policy. But it’s a role she’s fiercely defended.

“I really don’t appreciate having the role I’ve undertaken on behalf of the people of New York denigrated in such a way to say it’s simply a ribbon-cutting role,” she said in a debate that year. “I’m sorry, when a ribbon is cut, that means something good and new is happening. … I’ve been able to cut ribbons on new factories in places like downtown Buffalo, which was given up as lost and hopeless my whole life.”

Last year, as Cuomo’s profile rose, Hochul remained in the background. She was included in just two of the governor’s famous daily press briefings when New York was the center of the nation’s coronavirus outbreak. But she has conducted scores of radio interviews, and Cuomo — a notorious micro-manager — gave her some responsibilities like dealing with businesses in Western New York. Her supporters are optimistic she can step into the job on day one and handle the pandemic response.

“Kathy and I talked a lot during the last year about getting resources, what we need in county government, especially early on when it was difficult to get testing kits and the like. So she’s been pretty involved … in discussing what we need in county government and how she can help as lieutenant governor,” Erie County Executive Mark Poloncarz said.

Her elevation as the state’s chief executive will set several milestones.

“I think sometimes people up here feel kind of disconnected from state government because the seat of it is in Albany, and [it’s] perceived to be so dominated by New York City and downstate,” said McMahon.

And she’d be the first woman.

“We’ve never had a female governor, never been able to get a candidate to be that popular,” said Barbara Bartoletti, the former legislative director of the League of Women Voters of NYS.

“This would be an interesting way — and not uncommon in New York,” she said, referring to the scandals surrounding Cuomo and some of his male contemporaries. “Sooner or later, we’re going to learn that women in government do not do these things.”

Anna Gronewold contributed to this report.