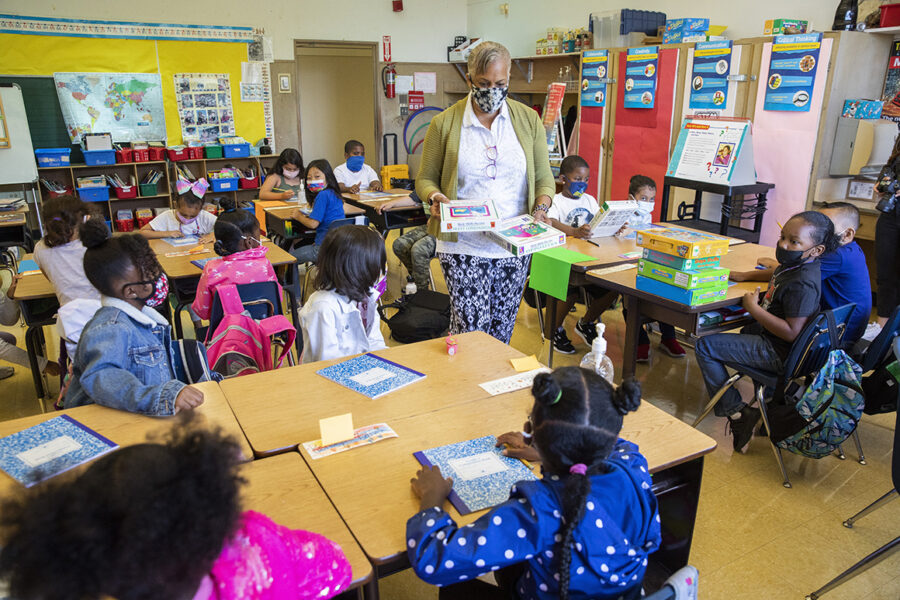 The National Education Association endorsed Covid-19 vaccine requirements for school workers on Thursday, aligning itself with the Biden administration’s push to get more Americans inoculated as the disease sends children to the hospital.

Teachers and other educators should have the option to submit to regular virus testing, NEA president Becky Pringle said, but she added her 3 million members should embrace vaccination, particularly as children return to classrooms for the new school year.

“We believe that such vaccine requirements and accommodations are an appropriate, responsible, and necessary step to ensure the safety of our school communities and to protect our students,” Pringle said in a statement issued as the American Federation of Teachers, the second-largest teachers union, stopped short of fully endorsing vaccine requirements for its roughly 1.7 million members.

The differing perspectives shed light on a debate both unions are still grappling with internally as school officials, especially in the South, are battling with parents and governors over mask-wearing requirements and a troubling surge of infections among children.

AFT union officials instead voted to encourage its workers to negotiate potential mandates with local governments and school systems.

“We believe that workplace policies should be done with working people, not to them,” AFT President Randi Weingarten said in a statement on Thursday.

“While we still believe the best way to increase vaccinations is through education and voluntary adoption, we want to be in a position to work with our employers on workplace vaccination policies, including how they’re implemented,” she added, “so people who need it can get accommodations, so everyone has access to vaccines and time to get them, and so no one is penalized for medical or religious reasons.”

Both labor groups have promoted Covid-19 vaccines and regularly tout survey results from earlier this year that concluded 80 to 90 percent of their educators are vaccinated. They’ve also insisted the terms of any requirements be negotiated between workers and employers. Yet as more plans emerge to mandate vaccines for school workers, it’s not clear how the union messages will affect talks between local educators, school systems and cities that haven’t yet issued mandates.

A resolution from the AFT, approved late Wednesday during an internal meeting, lays out the importance of vaccines and urges union representatives to meet with employers before mandates are enacted to hash out accommodations such as regular virus testing for unvaccinated workers.

That language marks a subtle but notable shift from Weingarten’s recent public campaign to back mandates. She announced last week that the union would revisit its recent opposition to compulsory shots and stated her personal belief that the union should “be working with our employers, not opposing them, on vaccine mandates.”

California Gov. Gavin Newsom enacted the nation’s first statewide test-or-vaccinate requirement for teachers and school employees on Wednesday with backing from the state’s two major teachers unions — the California Teachers Association and the California Federation of Teachers. Other cities, including Denver and Washington, have also enacted their own requirements.

Jerry Jordan, president of the Philadelphia Federation of Teachers, told Pennsylvania lawmakers his union supported Weingarten’s position and was “fully prepared to support a negotiated vaccine mandate for staff.”

“This will include important exemptions for medical and religious reasons, and as all items related to working conditions, must be implemented utilizing the collective bargaining process,” Jordan said in written testimony to a statehouse policy committee on Wednesday. “But again let me be clear: this union has never, and will never, stand in the way of the health and safety of educators and students alike.”

Education Secretary Miguel Cardona also added his voice to the chorus on Wednesday, saying he supported mandating the Covid-19 vaccine for teachers and other school staff as districts across the country prepare to begin another school year shaped by the pandemic.

“I would favor the vaccine being required,” Cardona said during a virtual National Press Foundation event, adding that he believes some reluctant adults will change their minds once the FDA fully approves the shots. White House chief medical adviser Anthony Fauci also endorsed mandatory teacher vaccinations this week, saying the country has reached a “critical situation” amidst a “major surge” of Covid-19’s Delta variant.

“There are some of us that personally agree there should be a mandate,” said Zeph Capo, president of the Texas American Federation of Teachers.

“People are in different stages and different places, but people understand the dire importance of listening to medical professionals and doing everything we can to get this pandemic under control. Getting people vaccinated is what does that,” he said.