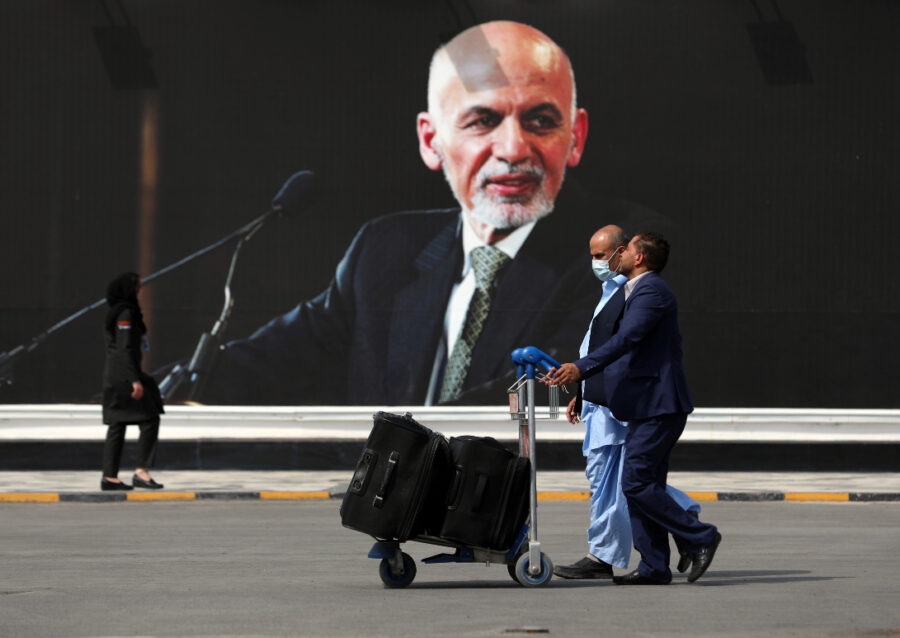 President Joe Biden showed no sign of backing away from his decision to withdraw all troops and a significant portion of the diplomatic corps from Afghanistan, restating his determination to leave the country in a statement released Saturday.

Biden authorized the deployment of some 5,000 U.S. troops to ensure “an orderly and safe” drawdown of U.S. and allied personnel in Afghanistan, which came after reports of the evacuation of U.S. Embassy staff in Kabul to the international airport as the Taliban rapidly close in on the capital.

Secretary of State Antony Blinken has been directed to support President Ashraf Ghani and other Afghan leaders amid turmoil in the region, Biden said. Ambassador Tracey Jacobson was charged with overseeing the relocation of Afghan special immigrant visa applicants and other Afghan allies.

Biden further said he had ordered U.S. armed forces and the intelligence community to maintain the capability to address “future terrorist threats from Afghanistan.”

Biden, who is currently at Camp David, criticized the actions of his predecessor, former President Donald Trump, on Afghanistan in the months before leaving office, before adding, “I was the fourth President to preside over an American troop presence in Afghanistan—two Republicans, two Democrats. I would not, and will not, pass this war onto a fifth.”

Biden and Vice President Kamala Harris were briefed Saturday morning by their top civilian and military advisers on the drawdown, a White House official said.

Meanwhile, staff at the U.S. Embassy in Kabul are being swiftly evacuated to the international airport as the Taliban close in on the capital city, one person familiar with the situation told POLITICO.

Some of the staff members have already arrived at the airport, this person said, protected by U.S. troops ahead of a likely onslaught by the militants who have swept across the country in recent days.

The movement comes as the last of the 3,000 American troops rushed to the city are arriving at the airport to help with the departure of American citizens, as the Taliban have pushed within 10 miles of the capital.

Pentagon press secretary John Kirby explained the latest troop increase on Saturday, tweeting: “There was already 1,000 troops in Kabul; we ordered 3,000 in last week, and the President accepted @SecDef recommendation today to move in the lead battalion of the 82nd Airborne Brigade Combat Team, adding another 1,000.”

Saturday continued the string of losses for the Kabul government, with Logar province south of Kabul, and Mazar-e-Sharif in the north, falling to the Taliban. American military officials in Kabul are still advising their Afghan counterparts how to construct a defense of the capital city, a sprawling, four-million-person oasis of government control that has become increasingly isolated.

“The situation has all the hallmarks of a humanitarian catastrophe,” the World Food Programme’s Tomson Phiri said at a U.N. briefing on Friday.

The administration is still struggling to find temporary refuge for Afghans seeking special visas to the United States. U.S. officials have been urging Kosovo and Albania to take the applicants after similar efforts with Central Asian and other countries failed.

A State Department memo sent Saturday requested the groups share the names of Afghans who need extraction, according to an official who saw it, and that those names would filter into a list held by a government-wide coordination cell.

“Everything’s in overdrive, it’s nonstop,” said Kim Staffieri, executive director of the Association of Wartime Allies, one of the organizations that received State’s request. “It’s utter chaos and we should’ve started three months ago.”

Reuters first reported on State’s request. Staffieri and leaders of other groups POLITICO spoke with wondered why the administration still won’t send extracted Afghans to Guam, the U.S. territory whose leadership agreed to host evacuees.

Blinken spoke Saturday with Ghani, according to a State Department readout, with Blinken emphasizing the United States’ commitment to the Afghan government and people.

U.S. envoy Zalmay Khalilzad spent Saturday meeting with Taliban representatives in Doha, but no agreement has been reached to stop the fighting. It remains to be seen whether the government intends to dig in and defend Kabul or negotiate its surrender.

The fall of Mazar-e-Sharif, the country’s fourth-largest city, follows the losses of Ghazni and Herat on Friday, the country’s second- and third-largest population centers, leaving Kabul alone among the major urban hubs. Although thousands of Afghan troops have consolidated there, there is no indication that those units will fare much better than any of the other Afghan army units in recent weeks.

Michael Patrick Mulroy, a top Middle East official at the Pentagon during the Trump administration, said a chaotic evacuation was always likely. “We were headed in this direction after they sent 3,000 troops and ordered the destruction of embassy documents,” he told POLITICO.

Sen. Mitt Romney (R-Utah), a member of the Foreign Relations committee, on Saturday hit the Biden administration for its actions, tweeting: “I understand but disagree with those who felt we should leave Afghanistan; I cannot understand why it has been done with such tragic human cost; without an effective strategy to defend our partners; and with inestimable shock to our nation’s credibility, reliability, and honor.”