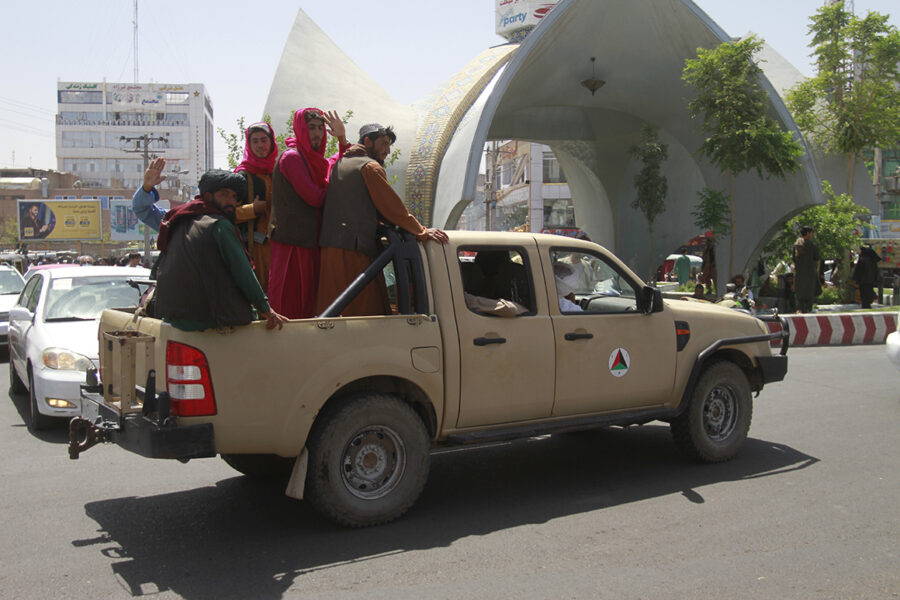 On Sunday, as the Taliban moved into the capital city of Kabul with stunning speed, President Ashraf Ghani fled the country — a sign the Afghanistan government is on the verge of complete collapse. Nearly 20 years after the U.S. invaded Afghanistan in the wake of Sept. 11, the State Department is burning classified documents and scrambling to evacuate embassy employees. The Kabul airport is reportedly under attack.

We reached an Afghan journalist who has worked with American media outlets. Now in hiding with his family, the journalist, who asked not to be identified to protect his safety, described a city where fearful citizens are both shocked by the sudden turn of events — and bitterly disappointed by the Biden administration’s decision to pull out of Afghanistan.

There’s a lot of panic and fear in the city. There is a curfew, so it’s completely empty and quiet in the streets of Kabul right now.

So many journalists are calling me. I’m scared for their lives. It’s the worst night of my life for me and thousands of others.

It turned out to be against the expectations of everybody. We thought the Americans would not ditch us, which seems to be the case right now.

We could never have imagined and believed that this would happen. We could never imagine we could be betrayed so badly by the U.S. The feeling of betrayal… I dedicated my life to the [American] values.

Had I known that this commitment was temporary, I wouldn’t have risked my life. I could have left Kabul or stayed and not [pushed for freedom of the press in Afghanistan] at all. I would’ve had the freedom to go anywhere in Afghanistan. But right now, I’m just talking to you from hiding. This is the first time I’m experiencing this in my life.

I’m trying to find a way to leave. I’ve probably got like a big target on my back. If I said “I’m not scared,” I would be lying.

People here are shocked [by the U.S. pulling out of Afghanistan]. They never could imagine they would do this. If they abandon us, probably thousands of people would be killed. And you know no longer would the U.S. have the moral authority to go places to say, “We believe in human rights. We fight for human rights and democracy.”

I don’t care if it’s the Trump administration or the Biden administration. I believed in the U.S. But that turned out to be such a big mistake in my opinion.

[When the U.S. first invaded Afghanistan], there was a lot of hope.

I want the American lawmakers to know it’s not good to ditch your allies. This was the most irresponsible act, ever. It’s just like taking us and putting us before wolves.

The U.S. needs to be robust in terms of their actions. They need to be consistent and vigorous and say to the Taliban, ‘You cannot kill people.’ It needs to be communicated in a very vigorous and serious manner.

Would sending more U.S. troops help? Of course, it helps. I was really shocked when I heard the Taliban was in town. That was not part of the agreement.

Afghan journalists are able to broadcast, but not as much as they normally do. Many media outlets were out; even now, not all of them work. People have run to their houses, they’re staying in their houses.

I’ve left my destiny to the Almighty. Because I can no longer trust anybody.