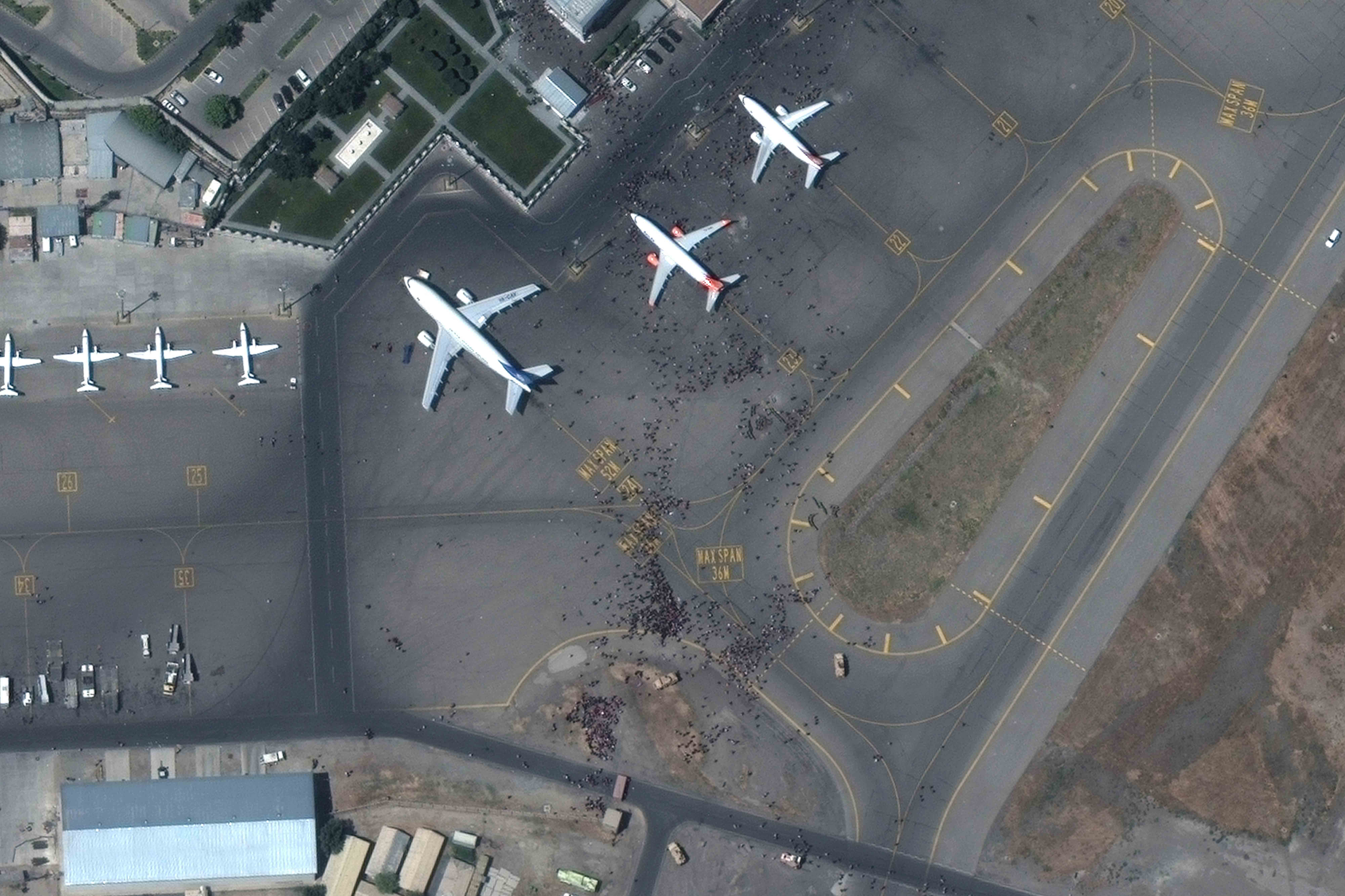 The U.S. has resumed operations at a key airport in Kabul, hours after suspending flights as crowds of people rushed the airfield in an attempt to flee Afghanistan following the Taliban’s takeover of its capital city, U.S. officials said Monday.

In a Pentagon news briefing on Monday afternoon, Garry Reid, the Defense Department’s lead for Afghan nationals’ relocation effort, said the military anticipated speeding up evacuations in the coming days.

“We anticipate picking up the pace, provided we can stabilize conditions at Kabul as described by the general,” Reid said, referring to Maj. Gen. William “Hank“ Taylor, the Joint Staff’s deputy director for regional operations and force management. “Our military team in Kabul is working side by side with the ambassador and his staff to coordinate future airlift operations in the coming days.”

State Department spokesperson Ned Price, speaking during a briefing overlapping with the Pentagon‘s news conference, said the department was asking U.S. citizens to shelter in place and not travel to the airport at this time.

“We also continue to pursue all options to relocate interested and qualified Afghan [Special Immigrant Visa] applicants and their immediate families, as well as other vulnerable Afghans,“ Price said.

The U.S. military has airlifted 1,600 people out of Afghanistan in recent days, Price told reporters, not including the 2,000 SIV applicants evacuated in the last two weeks.

“We are of course prioritizing American citizens,“ he said.

There are currently 2,500 U.S. troops at the Hamid Karzai International Airport, Pentagon spokesperson John Kirby told reporters Monday, and that number is expected to increase to more than 3,000 within 24 hours.

Over the next few days, the Pentagon expects the number of troops stationed at the airport to reach roughly 6,000.

“The reason we can be so quick with upwards of 6,000 troops is because we anticipated the possible need to do this,” Kirby said in the Monday afternoon briefing. “Now, could we have predicted every single scenario and every single breach around the perimeter of the airport with only a couple of thousand troops on the ground? Absolutely, there are changes that happen. So, plans are terrific and we take them seriously. But they are not and never have been perfectly predictive.”

Adding to the disorder, Kirby confirmed earlier Monday that in “two separate incidents” U.S. troops responded to “hostile threats” on the airfield, resulting in the deaths of two armed individuals who were shooting at them.

The Pentagon has “seen some preliminary indications” that one U.S. service member may have been wounded in one of the episodes, “but I cannot confirm that,” Kirby said. “We’re still trying to track that down.”

At least seven people died during the storming of the airport on Monday, The Associated Press reported, including several Afghans who clung to a departing American military jet and fell from the flight as the aircraft gained altitude.

Earlier Monday, President Joe Biden’s top national security officials expressed confidence that the U.S. military could continue evacuation flights out of Afghanistan, carrying Americans and Afghans to safety amid the collapse of the government in Kabul.

“We believe that we can effectuate an ongoing evacuation of American citizens, of Afghans who worked for us — including interpreters and translators — and other vulnerable Afghans at risk,” national security adviser Jake Sullivan told ABC in an interview.

“We are working to do that — first, by securing the airport today. And then, in the days ahead, by taking people out one flight at a time, flight after flight,” Sullivan said. “We fully intend to continue an evacuation process to bring out people who worked alongside of us in Afghanistan.” 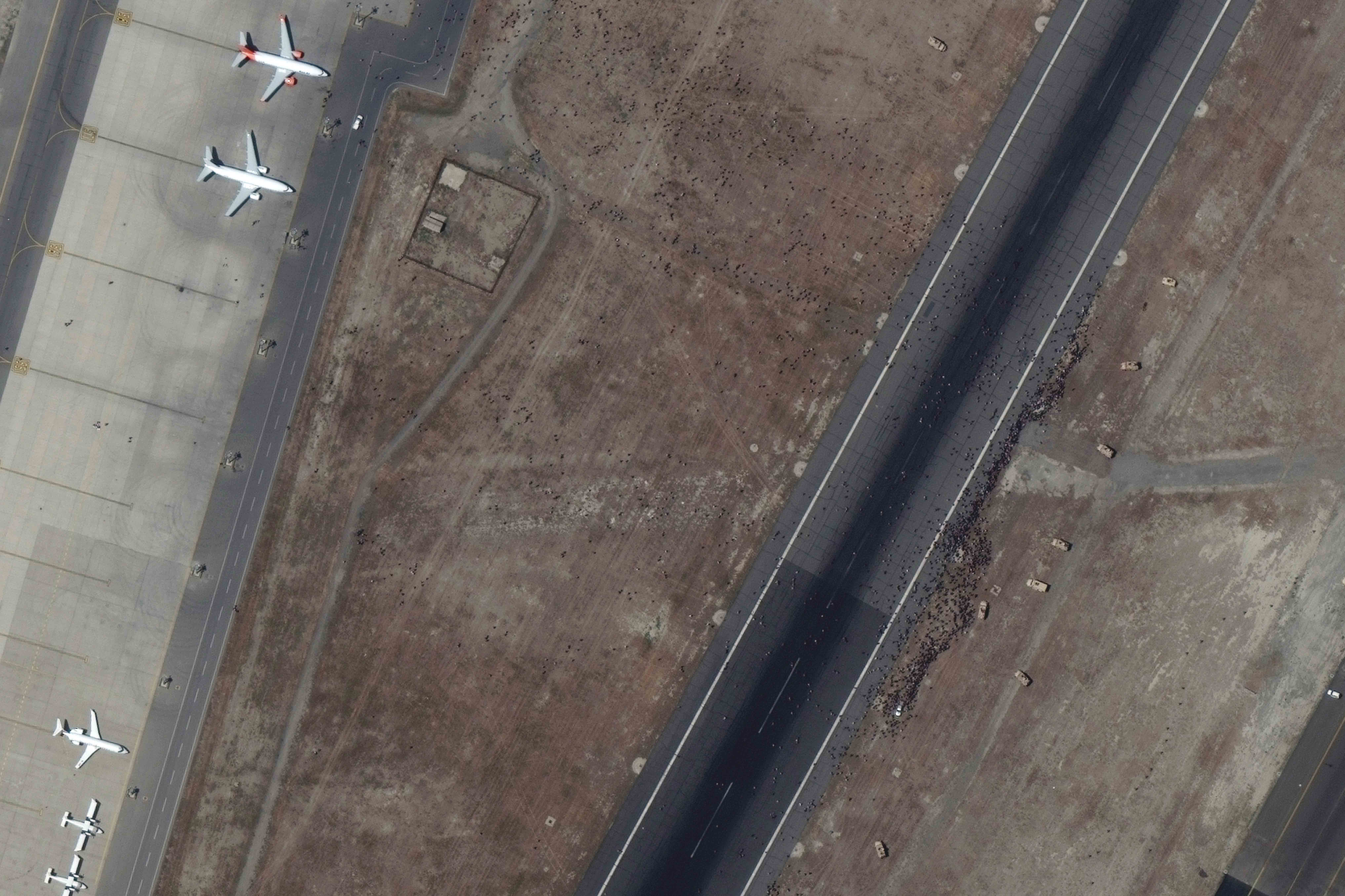 Deputy national security adviser Jon Finer also told MSNBC in an interview Monday that administration officials “remain engaged in diplomatic conversations” with Taliban representatives in Qatar, and that the U.S. has conveyed “that they need to enable and allow … the airport to function, people to get access to the airport, and our flights to evacuate Afghans and Americans and others who are vulnerable to proceed.”

“So far, they have done that,” Finer said of the Taliban. “And we have been very clear to them that needs to continue.”

“I can tell you that the general was very clear and firm in his discussions with Taliban leaders that any attack on our people or on our operations at the airport would be met swiftly with a very forceful response,” Kirby said.

In the State Department briefing Monday afternoon, Price also said the U.S. had “engaged with the Taliban,” but he demurred when asked whether officials had reached an agreement for the U.S. military to run the airspace.

“I would say that some of those discussions have been constructive,” Price said. “But again, when it comes to the Taliban, we are going to look for their actions, rather than listen to their words.”

Biden was briefed Monday morning by his national security team — including Defense Secretary Lloyd Austin and Gen. Mark Milley, the chair of the Joint Chiefs of Staff — “on the security situation at Hamid Karzai International Airport, and ongoing efforts to safely evacuate American citizens, US Embassy personnel and local staff, SIV applicants and their families, and other vulnerable Afghans,” the White House said in a statement.

Biden returned early from his trip to Camp David to deliver a Monday afternoon address on Afghanistan. The president leaned into his decision to withdrawal U.S. forces, casting blame on his predecessor, as well as Afghan leaders and military, for the country’s fall to the Taliban.

The current military mission, Biden said, is to “get our people and our allies out safely as quickly as possible. And once we have completed this mission, we will conclude our military withdrawal. We will end America‘s longest war after 20 years of bloodshed. The events we are seeing now are sadly proof that no amount of military force would ever deliver a stable, united, secure Afghanistan.“

After the briefing, the president returned to Camp David.

Lara Seligman and Maeve Sheehey contributed to this report.