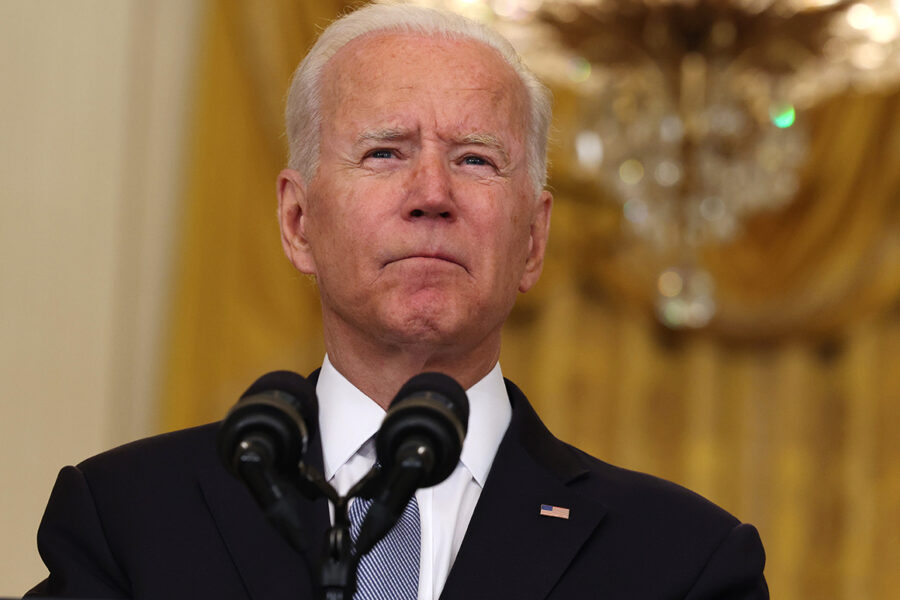 The White House is moving quickly to contain the fallout from the botched Afghanistan withdrawal, hoping to blunt possible damage to the rest of the president’s agenda.

Since Sunday, administration officials have been issuing assurances to concerned Democrats and talking with allies around the world that felt betrayed. They are calling members of Congress who have been publicly supportive of Joe Biden to express the president’s gratitude.

Biden’s aides are adjusting their communications strategy regarding the country’s collapse to corral supportive voices and push back on the “crisis of confidence” narrative. Their overt adjustments include dispatching national security adviser Jake Sullivan to the press briefing Tuesday to offer more transparent answers — delivered in a more conciliatory tone than the president took in his remarks on Monday. And the White House shared a new image of the president surrounded by his national security team, countering its much-maligned weekend photo of Biden appearing isolated at Camp David amid the erupting chaos in Kabul.

The Democratic National Committee has pushed out messages bolstering Biden’s leadership and combating what it characterized as Republican “hypocrisy on Afghanistan.” VoteVets, a major veterans organization, lauded Biden’s bravery in ending the occupation on a call with news reporters. And Biden himself is touching base with the world leaders who came away burned when the U.S. took its swift, unilateral actions without their counsel.

It was all part of the response to the sweep of Democrats who separated from Biden since Afghanistan fell to the Taliban over the weekend, openly criticizing him for his management of the tense wind-down of America’s 20-year troop presence in the country. Now, the administration is facing probes from three congressional committees helmed by senior Democrats and aggressive efforts by Republicans to exploit the morass overseas.

Much of their focus is on executing the withdrawal and getting Americans and Afghans who worked alongside the U.S. out of harm’s way. Some Democrats are still grousing over why the president was at Camp David as the Taliban seized Kabul, completing their lightning-quick takeover of the country, and why, after addressing the American people, he returned to his summer retreat. Others are calling out the administration for relying on talking points that essentially conceded that ending the decadeslong occupation was always going to be messy no matter how it was drawn up.

“Presidents are judged, not just on the basis of their decisions, but on how they implement those decisions,” said Leon Panetta, the former U.S. Defense secretary and CIA chief who has likened the Afghanistan withdrawal to a “Bay of Pigs” moment for Biden. “I am not one that believes that chaos is somehow unavoidable.”

As for the fateful image, Panetta added it would have been better for Biden to have stayed away from Camp David — “basically stay in the White House and handle it from there.”

But, the former presidential chief of staff allowed, “I’m not there. There’s probably a lot of emotions involved. He’s handling a lot of crises. He’s trying to deal with infrastructure and Covid. I’m sure he just wanted to get the hell out of there.”

As evacuations unfolded in Kabul, Biden’s aides sought to regain control of the storyline. They booked the president for an interview with ABC News’ George Stephanopoulos that’s Wednesday on “World News Tonight” and Thursday on “Good Morning America.” After issuing the more robust image of Biden — this time in formal suit and tie rather than the leisurely blue golf shirt — officials were still careful to note that Biden is fully engaged no matter where he is or what he’s wearing.

The White House has also been privately back-channeling with foreign policy experts and pundits, including those who have been deeply critical of the administration’s handling. Senior officials, meanwhile, have fanned out to clean up previous claims that were stirring concerns from allies at home.

A Pentagon spokesman stressed that the U.S. was not depending on the “goodwill” of Taliban officials for its mission at the airport. The declaration from John Kirby came after Sullivan said U.S. officials believed its “safe passage agreement” with the Taliban could last until Aug. 31, even as he acknowledged that some civilians were “being turned away or pushed back or even beaten.”

Administration officials maintained Wednesday that there was broad support for ending the conflict and that they are working hard to get Americans and vulnerable Afghans out of the country. They pointed to improved conditions at Hamid Karzai International Airport, describing it as an altogether different scene, with military control and flights going in and out of Kabul.

“The president made the right decision to end a decadeslong war and is deeply focused on getting every American out of Afghanistan, along with our allies and vulnerable Afghans,” White House spokesman Andrew Bates said in a statement.

But the administration has faced uncomfortable questions about what lengths the military was willing to go to bring stranded Americans from Taliban-controlled areas to the safety of the airport. On Wednesday, officials briefed congressional staffers about the evacuation efforts, according to a person who attended the session. Aides were told that the military is drawing up plans to transport Americans to Kabul from other parts of the country, given concerns about their safety in making the trek to the capital, the person added. Taliban checkpoints throughout Afghanistan have made it difficult for Americans to escape to Kabul, where the only airport under U.S. control is located.

The administration, through the Defense and State Departments, also has tried to get ahead of concerns by answering questions from Democratic lawmakers regarding efforts to speed Special Immigrant Visas to Afghans. 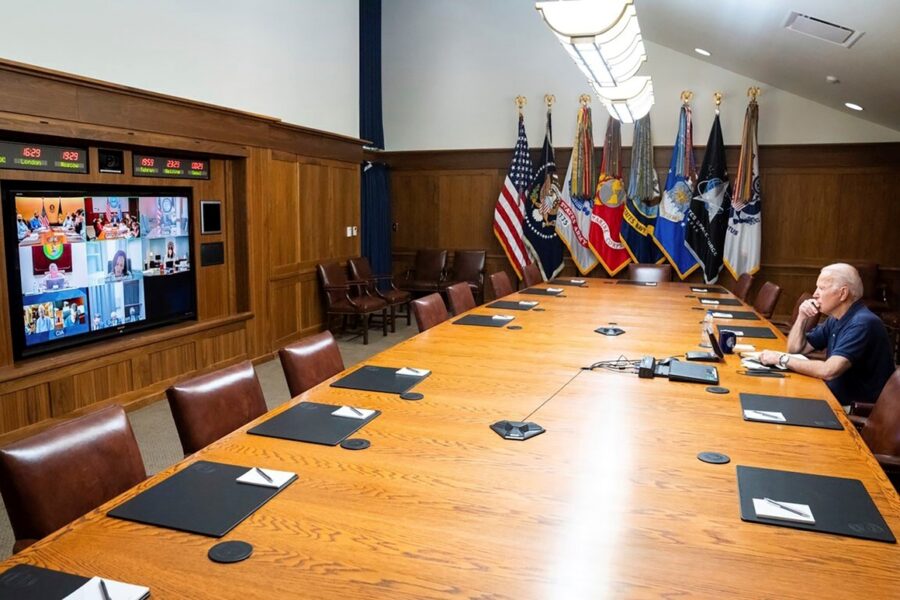 But one House Democratic source said there is a blame game unfolding between officials at the Defense and State departments over the processing of the visas and the intelligence failures. House members are expected to receive a classified briefing on Afghanistan next week.

Democrats on the Hill are focusing their attention on the immediate evacuation needs. Rep. Gerry Connolly (D-Va.) has submitted more than 300 applications for visas and is pressing the State Department to process people as “liberally and leniently” as possible. The State Department left Connolly with the impression that they planned to be lenient and not insist on perfect documentation, but they gave no hard confirmation. Connolly, however, still defended Biden, arguing that the events of the past week cannot be viewed in a vacuum.

“It was Donald Trump and Mike Pompeo that set the events of this last weekend in motion, not Joe Biden,” said Connolly, a member of the House Foreign Affairs Committee. “They’re the ones that legitimized and elevated the Taliban in agreeing to negotiate directly with them face to face in Doha, Qatar.”

Connolly’s one criticism of Biden, “if I were to criticize [Biden] at all,” he said, is that the administration “overestimated the amount of time they thought they had with the Afghan military we had trained” and “bought into the conventional wisdom being propounded by so-called experts.” But he called it “false” and “undeserved” for the press and some of his colleagues to say the Afghanistan withdrawal would be an “indelible stain” on Biden.

“I am downright angered at some of the criticism being leveled at him,” he said.

Still, the White House is fighting to fend off criticism from all sides — from diplomats to Obama-era administration figures to members of Congress. The pending Democratic-led investigations on the chaotic withdrawal and intelligence failures will keep Afghanistan front and center in the coming months as the administration tries to pass Biden’s economic agenda. A number of Democratic lawmakers, including some who served in the military, have condemned the White House’s handling of the situation.

But some of Biden’s staunchest defenders in Congress have also been veterans. And senior White House staff have passed along Biden’s thanks to supportive lawmakers like Rep. Jake Auchincloss (D-Mass.), who served in Afghanistan, and Sen. Chris Murphy (D-Conn.).

The intraparty divisions reflect a dynamic that some Democrats note largely wasn’t happening under Trump, for fear of retribution.

“Many Democrats are overreacting and not taking the longer view,” said Mark Longabaugh, a Democratic strategist, speaking only to the politics of the decision. “It’s very possible that a year from now, Biden’s decision will look a lot different … In the short run, it’s messy.”

Noting that his own brother did three tours of duty in Afghanistan, Longabaugh added: “I gotta tell you, I’m glad he’s not going back for a fourth.”

Meantime, Biden spoke Wednesday with German Chancellor Angela Merkel, after touching base with British Prime Minister Boris Johnson a day before. He’ll also hold a virtual G-7 meeting next week to discuss strategies and approaches for Afghanistan, after a spate of news reports detailed how the British and Germans were up in arms over America’s handling of the withdrawal, as well as friction between U.S. and U.K. forces over their respective evacuation efforts.

Operationally, Biden’s challenges in Afghanistan are massive — and so are the risks. The Taliban are almost certain to provide a safe haven for al Qaeda and other terrorist outfits. Everything from intelligence gathering to counterterrorism operations are now tougher, and Biden has to worry about renewed violence after the Aug. 31 departure date for all U.S. troops.

But for now, he won’t be able to avoid the investigations and will face political consequences of what exactly went wrong. David Axelrod, a senior strategist to former President Barack Obama who worked in the White House and is now a CNN commentator, had panned the administration’s exit from Afghanistan, calling it a “disaster” and a “failure.”

“There are few people I respect as much as David Axelrod in the world of politics, he’s brilliant and he’s also a great human being,” White House press secretary Jen Psaki said Tuesday when asked about Axelrod, who recently called her “unflappable” and the most effective press secretary of his lifetime. “But he would be the first to say that there is a difference between being on the outside and speaking on television and being on the inside and the difficult choices that you have to make.”

Andrew Desiderio contributed to this report