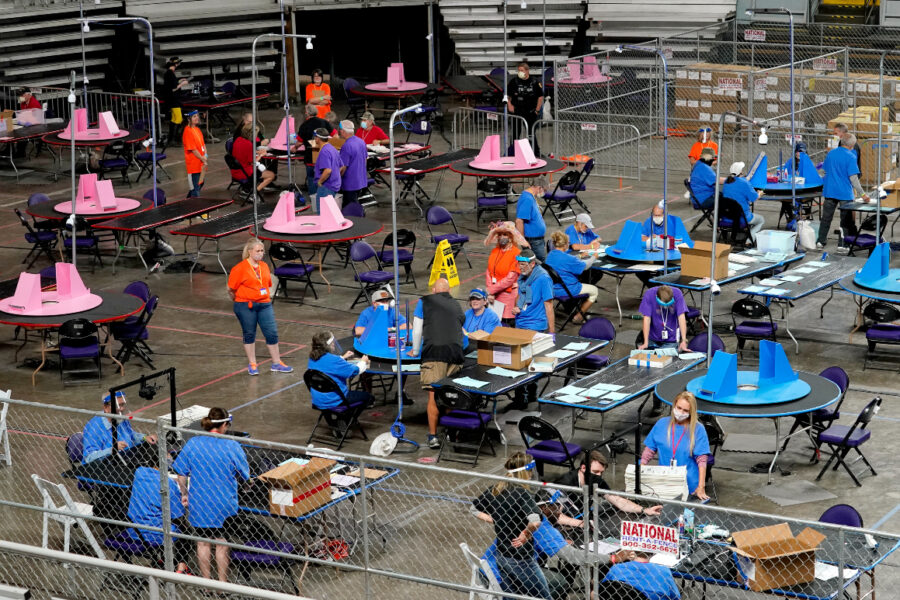 The controversial Arizona 2020 election review is almost over, but top officials in the state’s largest county and secretary of state’s office aren’t waiting for the conclusions, launching a pair of preemptive strikes against a report that could land as soon as next week.

Secretary of State Katie Hobbs, a Democrat, released a prebuttal laying out all of her office’s criticisms of the so-called election “audit.” She detailed the pre- and post-election testing election equipment underwent in Maricopa County and called the state Senate-led effort “secretive and disorganized” that routinely discarded best practices of an actual audit.

“All credible audits are characterized by controls, access, and transparency that allow for the processes and procedures to be replicated, if necessary,” Hobbs’ office wrote. “As this report has described, the review conducted by the Senate’s contractors has consistently lacked all three of these factors.”

And Stephen Richer, the Republican county recorder in Maricopa County, on Thursday issued a lengthy report of his own, in the form of an open letter to state Republicans, challenging the credentials of the reviewers and defending his own Republican bona fides.

“I will keep fighting for conservatism, and there are many things I would do for the Republican candidate for President, but I won’t lie about the election, and I will not unjustifiably turn my back on the employees of the Board of Supervisors, Recorder’s Office, and Elections Department — my colleagues and friends,” he wrote.

Since late April, contractors hired by the Republican-controlled state Senate have been reviewing all the ballots cast in Maricopa County, which President Joe Biden won en route to flipping the state, along with examining election equipment.

The process was initially supposed to take 60 days, but has stretched on well past that. Julie Fischer, a “deputy Senate liaison” for the effort, told POLITICO that the contractors’ report — the firm leading the effort is called Cyber Ninjas — is expected to be submitted to the state Senate on Monday, and a hearing will be scheduled after that.

Election officials in the state have opposed it nearly every step of the way, including Richer, Hobbs and the GOP-controlled Maricopa County Board of Supervisors.

“The only thing that has been consistent about this endeavor has been missed deadlines and having to walk back statements,” Richer said at a Thursday press briefing organized by the Center for Election Innovation and Research, a nonprofit, nonpartisan organization that works with election administrators. “Please look into it before taking whatever the Cyber Ninjas produce as gospel.”

The state Senate calls the Cyber Ninjas’ work an “audit,” a label almost universally rejected by election officials and experts because the Arizona effort has poorly defined processes and an embrace of conspiracy theories about the 2020 election.

From the jump, the review in Arizona has been plagued by disorganization and in-fighting. Cyber Ninjas’ owner is a supporter of former President Donald Trump and has promoted conspiracy theories about the election. Officials have said they were checking for bamboo fibers in ballots, a nod to a fringe theory that ballots were smuggled in from Asia. It has been funded by a nonprofit run by a correspondent for the far-right One America News Network and a former tech CEO who has poured millions into promoting Trump’s lies about the election.

Hobbs, who is also running for governor next year, was critical of the Cyber Ninjas-led effort in an interview earlier this week.

“This isn’t a real audit,” Hobbs said, noting that the schedule for the Arizona review has constantly shifted. “We’re sort of just bracing for impact” for the Cyber Ninjas’ conclusions.

In her prebuttal, her office wrote that “any ‘outcomes’ or ‘conclusions’ that are reported” from the state Senate’s process must be disregarded, and called on the state’s political leaders to “proclaim that the 2020 General Election was fair and accurate.”

Other election experts have previously torn into the Arizona review as unprofessionally run, including a report from former Kentucky Secretary of State Trey Grayson, a Republican, and Barry Burden, the director of the Elections Research Center at the University of Wisconsin–Madison.

“The Cyber Ninjas review suffers from a variety of maladies: uncompetitive contracting, a lack of impartiality and partisan balance, a faulty ballot review process, inconsistency in procedures, an unacceptably high level of error built into the process, and insufficient security,” Grayson and Burden wrote in their June report. “Because it lacks the essential elements of a bona fide post-election analysis, the review currently underway in Maricopa County will not produce findings that should be trusted.”

The Republican-controlled county board has also been engaged in a protracted battle with the state Senate. The board — and Dominion Voting Systems, the election vendor for the county — has refused to comply with recent subpoenas from the legislature, effectively daring the state Senate to find the board in contempt, with some Republicans in the closely-divided chamber saying they don’t support the Cyber Ninjas-led review.

The county board said this week it wants the state Senate to pay $2.8 million to replace voting machines the Senate subpoenaed. The county leased new machines after Hobbs said the old machines would be decertified because of chain of custody issues.

It also comes amid significant national pushback against the post-election audit movement. At a meeting of the nation’s secretaries of state last weekend, election officials overwhelmingly approved a set of guidelines for post-election audits.

Many of the guidelines read as implicit rebukes of the Arizona process, including definitive timelines and only allowing “a federally or a state accredited test lab to perform any audit of voting machine hardware or software.” The Justice Department also issued guidance late last month saying some post-election audits could run afoul of federal law.

Trump and his supporters have eagerly been awaiting the conclusion of the review in Arizona, and will likely use whatever the findings are to advance his baseless claims the election was stolen from him. During a July speech in the state, Trump said the process in the state would ultimately reveal that “we won by a lot,” and “this is only the beginning of the irregularities the Arizona audit is uncovering.” (There’s no legal process to transfer the state’s 11 electoral votes to his tally.)

Trump has encouraged his followers to try to export the Maricopa review to other states. Republican lawmakers in Pennsylvania and Wisconsin have tried to launch their own, but neither has gotten the traction of Arizona.

Ben Ginsberg, a prominent Republican elections lawyer who has spoken out about the efforts to undermine faith in American democracy following the 2020 election, said he hoped the Cyber Ninjas report would land without making much noise and could quell the movement. “Once they can’t be backed up, then that will be an object lesson to other states, not to go down that perilous path of basically losing your credibility,” he said at the briefing.

And Richer concurred: “The Cyber Ninjas have been out there in common parlance now for about four months, and we haven’t seen this in other states,” the county elections official responded, praising the work of Arizona journalists and election officials in the states. “If we can pat ourselves on the back a little bit here.”

At least one of those efforts outside of Arizona appears to be withering. Pennsylvania state Sen. Doug Mastriano, an ally of Trump who is considering a gubernatorial run next year, sought to launch his own investigation.

But on Thursday, Mastriano sounded discouraged about the effort on a since-deleted Facebook livestream, the Pennsylvania Capital-Star reported. “We’re not in a very good spot right now,” he said. “I put my name out there to get it done, and I’ve been stopped for the time being.”

Even so, some election security experts said this is likely not the end of questionable reviews of the 2020 election.

“I’m a little less sanguine about that, as I see ongoing efforts” across the country, said the Center for Election Innovation and Research’s David Becker. “I think we’re going to need to be continually vigilant.”