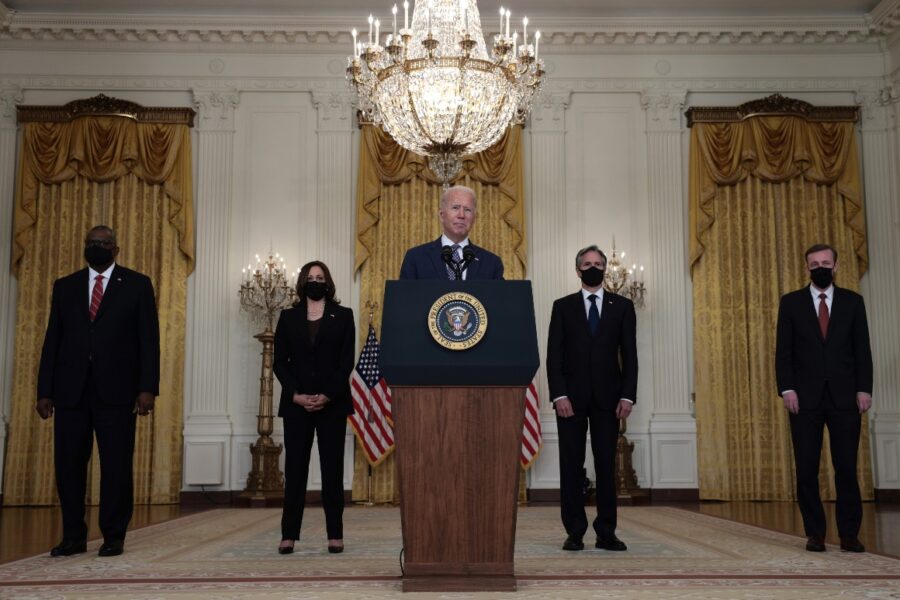 President Joe Biden on Friday vowed to evacuate all Afghan allies of the United States seeking to flee Afghanistan, extending the same commitment he made earlier this week to Americans still stranded in the Taliban-controlled country.

“There’s no one more important than bringing American citizens out, I acknowledge that. But they’re equally important, almost,” Biden told reporters following an address at the White House, referring to the thousands of interpreters and other Afghan personnel who aided the two-decade U.S. war effort.

Previously, Biden told ABC News in an interview Wednesday he would maintain the U.S. troop presence in Afghanistan beyond Aug. 31 — his self-imposed pullout deadline — if evacuation operations were not yet completed. But until Friday, that assurance appeared limited only to American citizens still on the ground.

Biden also indicated in his address that he may be willing to broaden the U.S. military presence in the capital city of Kabul beyond the international airport where all evacuations are taking place.

Specifically, Biden was asked if he would be willing to consider potentially deploying U.S. troops into Kabul on rescue missions to extract endangered Americans and Afghan allies — as British and French troops have reportedly done for some of their own countries’ citizens who were trapped by the Taliban.

“We’re considering every opportunity and every means by which we could get folks to the airport,” Biden said.

However, Biden suggested such moves would not be necessary, as he claimed Americans were having little trouble navigating past checkpoints operated by the Taliban and widespread chaos outside the airport.

“To the best of our knowledge, the Taliban checkpoints, they are letting through people showing American passports,” Biden said. “Now, that’s a different question when they get into the rush and crowd of all the folks just outside the wall near the airport.”

But later on Friday afternoon, Pentagon spokesperson John Kirby told reporters that the department is aware of cases in which Americans have had trouble accessing the airport.

State Department spokesperson Ned Price was also asked about the reports on Friday. He said no one is “denying” these claims, but similarly said the Department has only seen a small number of reports.

“Having said all that, this is an issue that we take with the utmost importance,” Price said.

In the Pentagon briefing, Kirby also clarified Biden’s earlier comments about al Qaeda being “gone” from Afghanistan. Kirby said the department believes al Qaeda’s presence there isn’t as significant as it was in 2001 but also noted that “we know that al Qaeda is a presence as well as ISIS in Afghanistan.”

Notably, Biden did not speak to the Taliban’s treatment of Afghan allies trying to reach U.S. flights. But he did express more empathy for the anguished state of the Afghan people than he had in previous remarks.

“The past week has been heartbreaking. We’ve seen gut-wrenching images of panicked people acting out of sheer desperation,” Biden said. “You know, it’s completely understandable. They’re frightened. They’re sad. Uncertain of what happens next. I don’t think any one of us can see these pictures and not feel that pain on a human level.”

Much like his speech from the White House on Monday — during which he fiercely defended the American withdrawal — Biden was still defiant Friday that his decision to pull U.S. troops out of Afghanistan was the right one.

“There will be plenty of time to criticize and second-guess when this operation is over. But now — now — I’m focused on getting this job done,” Biden said.

However, Biden’s latest remarks were laced with new warnings of the perils surrounding the urgent U.S. military evacuations.

“Make no mistake, this evacuation mission is dangerous. It involves risks to our armed forces, and it’s being conducted under difficult circumstances,” Biden said. “I cannot promise what the final outcome will be, or … that it will be without risk of loss.”

White House officials are unable to say how many Americans remain in Afghanistan, and they have begun to describe the situation in Kabul as more dire than senior members of the administration have previously acknowledged.

“We don’t have a precise number,” White House communications director Kate Bedingfield told CNN in an interview Friday, saying the official U.S. tally of Americans in Afghanistan had been muddied by those who may have departed the country over the past six months.

“As of a few weeks ago, we had already begun reaching out to all American citizens who were in Afghanistan via email, via text, via messaging app to hear from them and to understand their plans and work with them to get them out, if they want to get out,” Bedingfield said. “And so that is a massive logistical operation that’s underway.”

Addressing the U.S. evacuation mission out of the airport in Kabul, Bedingfield’s comments seemingly included several caveats, and she declined to guarantee that all Americans and Afghan allies would be transported safely out of the country.

“The president has committed, we will get every American who wants to get out, out of Afghanistan. And we are working to move as many of our allies — who helped us, who stood by us, who helped our servicemen and women — get out as possible,” Bedingfield said.

Pressed further by CNN on whether the administration was prepared to leave some people behind in Afghanistan, Bedingfield responded: “We are doing everything we can to get as many people out who want to get out before the Aug. 31 deadline. That is the sole focus of the president of the United States and his team right now. They are doing everything operationally within their capacity to get out.”

In Friday’s State Department briefing, Price said the Department has created a new task force focused on communicating with remaining Americans in Afghanistan.

“We’ve moved on to personal communication and personal correspondence, and we are reaching out with phone calls and contacting them, asking about their situation, where they are, who they may be with, and whether they would like to seek relocation to the United States.”

Price also said the U.S. will have “additional capacity for relocation sites” in the “coming hours” and days that will improve the efficiency of relocation efforts. He also provided a list of countries that will soon be transiting Americans, and some others, through their territories.

“Bahrain, Denmark, Germany, Italy, Kazakhstan, Kuwait, Qatar, Tajikistan, Turkey, the UAE, the United Kingdom, and Uzbekistan have been or will soon be transiting Americans or in some circumstances, others, through their territories to safety,” Price said. “Albania, Canada, Colombia, Costa Rica, Chile, Kosovo, North Macedonia, Mexico, Poland, Qatar, Rwanda, Ukraine and Uganda have also made generous offers regarding the relocation efforts for at-risk Afghans.”

U.S. flights out of Kabul were suspended for roughly eight hours Friday due to a backlog in processing evacuees at Al Udeid Air Base in Qatar. Amid the pause, the U.S. military had more than 1,200 Americans Afghans allies screened for transport onward.

Evacuees out of Kabul will now be transported to other bases in the Gulf region for screening, as well as to Germany. U.S. European Command confirmed to POLITICO that it was supporting the evacuation mission “through a variety of means,” including “through logistics and accommodations to house personnel and our pilots flying evacuees” to Ramstein Air Base.

Despite Biden’s openness to extending the evacuation mission beyond Aug. 31, Kirby said in a news briefing Thursday there had “been no decision to change the deadline.”

Kirby also conceded that an extension of the timetable for evacuations would need tacit approval from the Taliban in the form of a new agreement between U.S. officials and commanders of the militant group.

The U.S. military evacuated roughly 3,000 people from Hamid Karzai International Airport on Thursday aboard 16 American C-17 transport planes, the White House said. Of that total, 350 of the evacuees were American citizens and the remainder were families of American citizens, Special Immigrant Visa applicants and their families, and vulnerable Afghans.

Over the last 24 hours, 11 charter flights also departed the airport carrying an unspecified number of people, according to the White House. The U.S. military has evacuated roughly 14,000 people from Afghanistan since the end of July and roughly 9,000 people since Aug. 14.

Still, numerous media reports and social media posts have depicted desperate and increasingly dangerous scenes outside the airport in Kabul, as Americans and Afghan allies struggle to navigate past the Taliban’s checkpoints and face violence from its fighters.

Price appeared to downplay the level of chaos in a news briefing Thursday, saying he understood “that things are moving quite efficiently at this hour at the airport now.” Price also said that the department had received only “a small handful of reports” from Americans in the region.

On Friday, however, Bedingfield was more explicit in assessing the threats to potential evacuees in Kabul. “Obviously, look, this is an incredibly violent and chaotic scene on the ground. It’s dangerous. It’s dangerous for our troops who are there working to get people out. So we are trying to move quickly,” she said.

“Of course, the images that we’re seeing are heartbreaking, they’re appalling,” Bedingfield added. “It is a scary moment.”

Biden’s remarks Friday came after he and Vice President Kamala Harris met with their national security team “to hear intelligence, security, and diplomatic updates on the evolving situation in Afghanistan,” according to the White House.

Following his address, Biden was initially scheduled to depart for Wilmington, Del., where he was expected to spend the weekend. Instead, he will remain at the White House on Friday night, a White House official said.