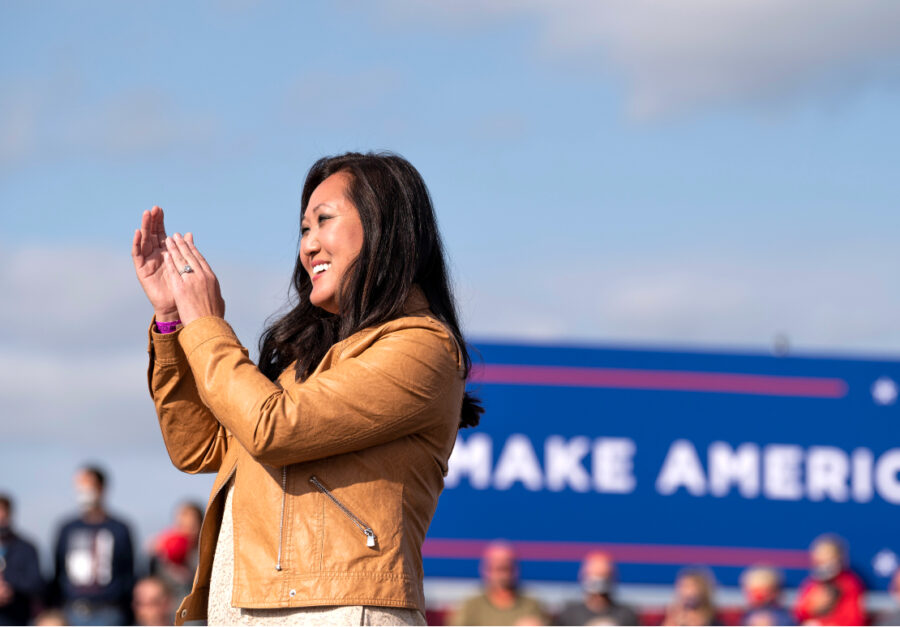 Less than a year ago, Minnesota looked every bit a swing state. Donald Trump was pouring millions of dollars into his campaign there, after nearly flipping the state in 2016, Republicans were making inroads in the ancestrally Democratic Iron Range. In the Twin Cities suburbs, nervous Democrats feared protests following the police murder of George Floyd could turn some voters to the GOP.

That all fell apart with Joe Biden’s victory in November. And nine months later, the resignation of the Minnesota Republican Party’s embattled chair, Jennifer Carnahan, on Thursday night marked a new low for a state party in decline.

The proximate cause of Carnahan’s departure was a firestorm that engulfed the party in recent days, after a GOP donor she was close to, Anton “Tony” Lazzaro, was indicted on federal sex-trafficking charges. A pile-on ensued, with Carnahan, the wife of Republican U.S. Rep. Jim Hagedorn, accused by party officials and former staffers of running a toxic, retaliatory workplace, mismanaging party finances and, through the use of non-disclosure agreements, squashing transparency.

“The party is in ruins,” Michael Brodkorb, a former deputy chair of the Minnesota GOP, said on Friday.

He added, “I don’t know if the party has hit rock bottom yet.”

There are reasons to think the party might not have. Even with Carnahan gone, Republicans are confronting what will likely be a monthslong slog of internal reviews and ongoing headlines about the saga — a drag on the party just over a year ahead of the midterm elections. In addition to the charges against Lazzaro, the chairwoman of the University of St. Thomas College Republicans was arrested on charges she assisted him in trafficking minors for sex, the Minneapolis Star Tribune reported.

Four former executive directors of the state party have called for an external financial audit.

First term state Sen. Julia Coleman, who was among the first GOP elected officials in the state to call for Carnahan’s ouster, said a big reason she decided to run for office was to get more young people, particularly women, to embrace the Republican Party, but that the current scandal has undermined those efforts.

“When you have woman after woman after woman coming out and saying that they had an issue with abuse or sexual assault and that our chairwoman stifled their story, that’s concerning to me,” said Coleman, whose father-in-law is former Republican U.S. Sen. Norm Coleman. “If I was a young woman recently graduating, I wouldn’t want to come anywhere near the MN GOP.”

Republicans in Minnesota were losing ground statewide long before Carnahan was forced out. Trump, who viewed Minnesota as one of his few pick-up opportunities in the November election, lost to Biden by more than 7 percentage points. And though Republicans flipped one rural congressional seat and maintained a majority in the state Senate last fall, they ceded ground in the state’s populous — and growing — suburbs, an ominous sign for the party’s future in a once-promising state.

Minnesota’s Democratic governor, Tim Walz, is expected to easily win reelection next year, while one of the state’s most prominent Republicans is now pillow salesman-turned-conspiracy promoter Mike Lindell.

In the wake of Carnahan’s departure, some Minnesota Republicans see reason for optimism. The party had rid itself of a “terrible chair” who “wielded a hammer and kept power in this state through intimidation and false accusations and all the things people hate about politics,” said Amy Koch, a former Republican state Senate majority leader.

“What happened this week,” she said, “is that a bunch of activists and legislators and former legislators, all those folks stood up and said it’s not OK. It’s not OK. We’re not going to allow this to go forward.”

But the party is nowhere close to moving forward in unison. Carnahan did not exit quietly, casting the deciding vote on Thursday to give herself a severance of about $38,000. Carnahan maintained in a statement that she had no knowledge of Lazzaro’s alleged activities, and decried a “mob mentality” that she said sought to “defame, tarnish and attempt to ruin my personal and professional reputation.” An attorney for Carnahan said she neither knew of nor covered up any harassment of staffers and that she expects to file defamation suits based on claims against her that he said are false.

Carnahan, after winning reelection as chair earlier this year, continues to retain some support within the party, and the rift between those supporters and her critics is now hanging over the GOP.

“The party’s going to have to suffer to some extent,” said Joe Polunc, a former GOP chair in Carver County, a fast-growing area southwest of Minneapolis that Trump carried in 2020, but where Republicans have been losing voting share. “I mean, the media’s all over it … so there’s going to be a period of time, it will be difficult.”

Polunc, who said Carnahan was unfairly tarnished by innuendo, said the GOP is “going to have to rebrand itself, come together, and move forward. It’s unfortunate, to be sure.”

Stanley Hubbard, the billionaire Minnesota Republican donor, said he has “no idea whether [Carnahan] did anything they said she did” but that jettisoning her may have been the product of a “panic-driven rush to judgment.” As a result, he said voters — and donors — may view Carnahan as an “innocent victim.” 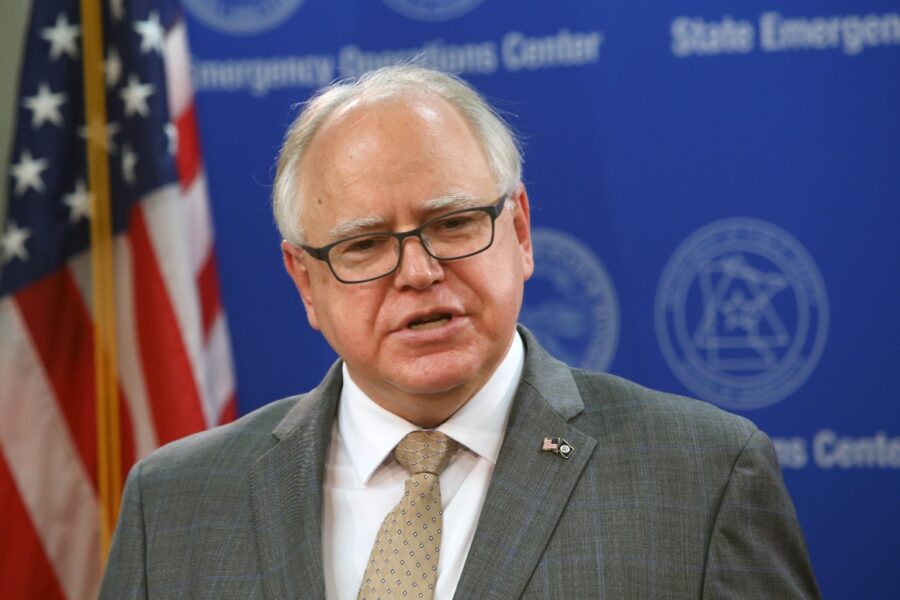 At the moment, the midterm outlook for Minnesota Republicans is bleak. The marquee election in the state next year will be the governor’s race, where the Democratic incumbent, Walz, defeated his last Republican opponent, Jeff Johnson, by more than 11 percentage points.

Walz’s public approval ratings remain relatively strong. And the Twin Cities metro area has become so prominent in Minnesota’s statewide elections — and so Democratic — that Republicans now face a reality where they would have to run up gigantic margins in the state’s rural areas to overcome it.

Regionally, Minnesotan Republicans remain competitive in rural swaths of Minnesota. But in statewide elections, they have not won a contest in 15 years, and the GOP has been shut out of presidential races even longer — with the state last voting for a Republican, Richard Nixon, in 1972. Now the party has an internal maelstrom to overcome on top of that.

“When you have these sorts of breakups, so to speak, it causes angst in the party,” said Eric Langness, vice chair of the GOP in the state’s 6th Congressional District. “It causes relationships and trust to be compromised. I think our party has some serious challenges ahead. We really need to look deep and say, ‘OK, here’s the wrongs of our past. How do we make it so that this is not going to happen again?’”

Jennifer DeJournett, president of Voices of Conservative Women and a longtime GOP activist, said there needs to be a thorough outside investigation of the alleged personnel abuses, as well as an independent audit of the party’s finances before there can be any hope of moving forward.

“But the operation of politics doesn’t stop,” DeJournett said. “There’s a ton of alphabet soup groups out there that are still doing the work to help push causes and candidates … Politics doesn’t stop while the state party is getting its act together.”

DeJournett and other veteran party activists were around a decade ago when the Minnesota Republican Party faced a similar crisis after running up huge debts and the party leadership collapsed. She sees a silver lining in how quickly Carnahan resigned.

Before the party can begin to pick up the pieces, it will need to elect a new party chair, along with other leadership positions. State Sen. Mark Koran, who unsuccessfully challenged Carnahan earlier this year for party chair, is a likely candidate. Other names being floated: former state Rep. Kelly Fenton, former state Senate Minority Leader David Hann, lawyer and longtime GOP activist Harry Niska and Republican National Committeeman Max Rymer.

Outside of the party, it remains unclear how the electorate will respond to the state party’s implosion. An early test will come next week, at the Minnesota State Fair.

Polunc, who will be at the state party’s booth there, said, “It will be interesting to see what kind of response we get from the public at large as they walk by, and we’ll see what kind of comments.”