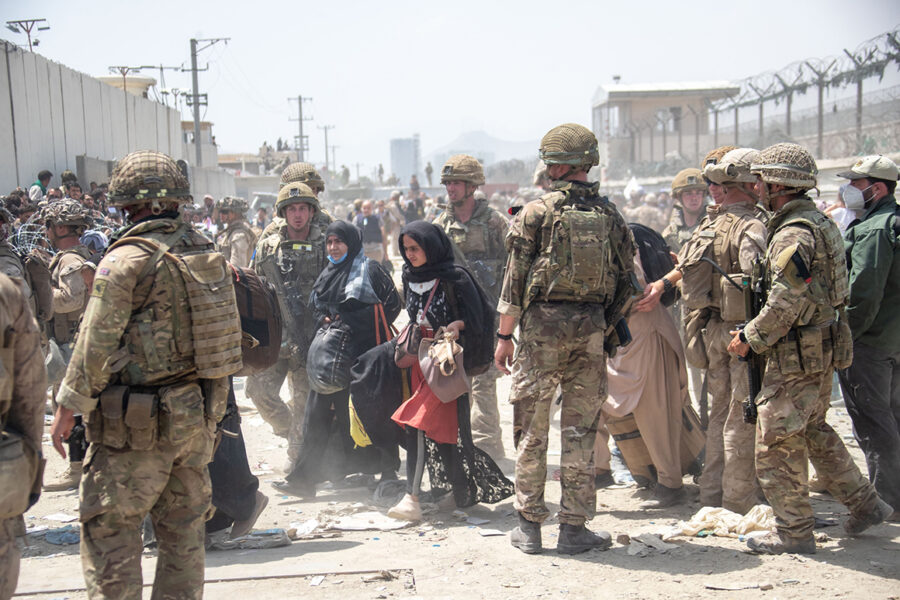 President Joe Biden affirmed on Tuesday that he would not immediately extend an Aug. 31 deadline to withdraw U.S. combat troops from Afghanistan.

In making the decision, the president agreed with a Pentagon recommendation to stick to the deadline, according to two people with knowledge of his decision.

In a Tuesday afternoon address, the president said that 70,700 people had been evacuated from the country since Aug. 14 and that the U.S. was on pace to “finish” evacuations on his timeline, though he didn’t specify whom those evacuations would include. Biden said he’d asked Secretary of State Antony Blinken to provide a “detailed report” on Wednesday, outlining how many Americans have been evacuated and how many still remain in Afghanistan.

But a completed withdrawal by the end of the month will be dependent upon the Taliban’s continued cooperation, Biden said, adding that he’d asked the Pentagon and State Department for contingency plans in need of an extension.

“The completion by Aug. 31 depends upon the Taliban continuing to cooperate and allow access to the airport for those who we’re transporting out and no disruptions to our operations,” he said.

The announcement reflects Biden’s continued determination to extricate the U.S. from the 20-year war in Afghanistan, as well as the deteriorating situation on the ground as the Taliban tighten their grip on the country. Already the Taliban are blocking efforts to get American citizens and Afghan allies from Kabul into the airport, and have threatened “consequences“ if American troops do not leave by the deadline.

The president made the decision not to extend the deadline amid harsh criticism from lawmakers and U.S. allies, who criticized the administration‘s handling of the withdrawal and ongoing execution of the evacuation effort underway at the Hamid Karzai International Airport in Kabul.

Biden stressed the threat to American troops, noting that “each day of operations brings added risk to our troops” and pointing directly to the growing threat of an attack by the terrorist group ISIS-K.

“Every day we’re on the ground is another day we know that ISIS-K is seeking to target the airport and attack both U.S. and allied forces and innocent civilians,” Biden said.

Biden’s plan to stick with the rapidly approaching deadline comes despite deteriorating conditions in the Afghan capital, Kabul, where U.S. troops are rushing to evacuate as many Americans and Afghan allies as possible, and despite warnings from lawmakers that it’s not possible to complete the evacuations before the end of the month.

White House Press Secretary Jen Psaki said later Tuesday that Biden told his G-7 counterparts earlier in the day that the mission “will end based on the achievement of our objectives.” The U.S. is “on pace” to finish by Aug. 31, Psaki added.

“There was strong agreement among the leaders, both about the evacuation mission underway as well as the need to coordinate our approach to Afghanistan as we move forward,” Biden said on Tuesday.

He said the nations “renewed” their humanitarian commitment to the Afghan people and discussed their “mutual obligation” to support refugees evacuating the country. The G-7 leaders agreed to “stand united” in their approach to the Taliban, Biden said, including for when it comes time to decide on the legitimacy of a future government.

“We agreed the legitimacy of any future government depends on the approach it now takes to uphold international obligations, including to prevent Afghanistan from being used as a base for terrorism,” the president said. “And we agreed that none of us are going to take the Taliban’s word for it. We’ll judge them by their actions, and we’ll stay in close coordination on any steps that we take moving forward in response to the Taliban’s behavior.”

American allies, including Prime Minister Boris Johnson of Britain, were in favor of postponing the pullout date to accommodate further evacuations, while Democratic and Republican members of Congress have demanded Biden maintain the military presence past the end of the month, as well.

“I remain not confident that we can get it done,” Rep. Jason Crow (D-Colo.), a former Army Ranger who served in Afghanistan, said after a classified briefing with senior administration officials on Tuesday. “There are more of those folks in Afghanistan right now than we have the capability to evacuate between now and the end of the month. That’s why the mission must be extended.”

Nevertheless, the administration has projected confidence this week that it will be able to safely shuttle all Americans seeking to flee Afghanistan out of the country by Aug. 31. And although the administration has not guaranteed the same timeline for endangered Afghans who aided the two-decade U.S. war effort, Biden has similarly pledged to evacuate those Afghans who also want to leave.

“We believe that we have time between now and the 31st to get out any American who wants to get out,” national security adviser Jake Sullivan told reporters at a White House news briefing Tuesday.

One group likely to be pleased by Biden’s decision is the Taliban, which have made clear their desire for the U.S. to adhere to the Aug. 31 withdrawal deadline as they cement control of Afghanistan. The militant group has also taken steps to prevent Afghans from leaving the country, which further complicates Biden’s pledge to evacuate Afghans who aided the U.S. war effort.

Taliban spokesperson Suhail Shaheen told Sky News in an interview Tuesday that “there would be consequences” if American forces did not leave by the end of the month, warning that an extended U.S. troop presence would “provoke a reaction.”

Still, the Biden administration is preparing several contingency plans, according to lawmakers who attended Tuesday’s briefing, in the event that Biden decides to extend the withdrawal deadline past Aug. 31.

“You need to have a plan to go past the 31st, and they assured me that they do,” House Armed Services Committee Chair Adam Smith (D-Wash.) said. “Absolutely there’s a risk [of maintaining a troop presence past Aug. 31]. And that was the purpose of my question, to mitigate that risk as much as possible — work with the Taliban wherever they can, to give us a little bit greater flexibility.”

“Once we decide to end the mission, that’s going to be a very difficult, tricky and risky operation to finally pull everybody out,” he added.

Although Sullivan asserted on Tuesday that “it will be the president’s decision how this proceeds, no one else’s,” administration officials have acknowledged in recent days just how much the U.S. evacuation effort has depended on close communication between American and Taliban officials.

In the latest sign of that coordination, CIA Director William Burns secretly met with Taliban leader Abdul Ghani Baradar in Kabul on Monday, The Washington Post and other news outlets reported Tuesday.

On Tuesday morning, shortly before news broke of Biden’s decision to maintain the Aug. 31 deadline, Pentagon press secretary John Kirby told reporters at a news briefing there had “been no change to the timeline of the mission” in Afghanistan.

Meanwhile, Taliban spokesperson Zabihullah Mujahid told reporters at a news conference that the militant group was “not going to allow” Afghans to leave the country, as Biden was meeting virtually with G-7 leaders.

Biden first publicly entertained the idea of postponing the evacuation deadline in an interview with ABC News last Wednesday, when he said that if there were “American citizens left” on the ground after Aug. 31, “we’re going to stay until we get them all out.”

In an April speech announcing his plans to pull the U.S. military out of Afghanistan, Biden initially pegged Sept. 11 — the 20th anniversary of the 9/11 terrorist attacks — as the date by which American forces would be withdrawn.

In an address last month, Biden revised that withdrawal deadline to Aug. 31.

Myah Ward contributed to this report.