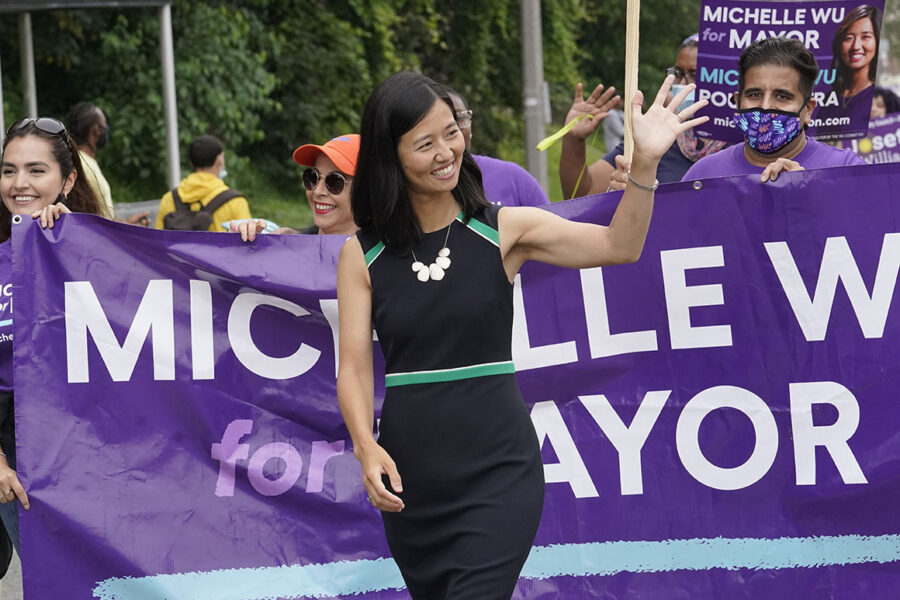 BOSTON — One of Boston’s biggest progressive groups was at an impasse. Its members had deliberated for weeks over who to endorse before the city holds its preliminary mayoral election next month.

One committee recommended backing acting Mayor Kim Janey. But multiple rounds of ranked-choice voting failed to produce a consensus among the members of Jamaica Plain Progressives.

So the group gave up. Its leadership wrote an email to members that the “difficult and sometimes emotional” process would result in no endorsement ahead of the preliminary election.

JP Progressives’ struggle to choose a candidate is indicative of the larger ideological and community divides at play in the Boston mayor’s race as politicians and voters try to whittle down a historically diverse field in which every major candidate would be a first in the corner office and each one brings years of city government experience to the table.

The deep well of experienced, non-white candidates is widely cheered within the city’s Democratic apparatus. But the same milestone is proving challenging to navigate — dividing progressive activists and bringing up tough conversations within Boston’s Black community, where leaders have worked for decades to elevate one of their own to the city’s highest office.

“It feels like a breakthrough moment and such a sea change,” state Sen. Sonia Chang-Díaz, a Latina and Democrat running to be the state’s first elected female governor, said of the mayor’s race. She said the choice will be “a joy” for voters — “particularly voters who care about racial and ethnic justice, and the advancement of women and the progressive agenda.” 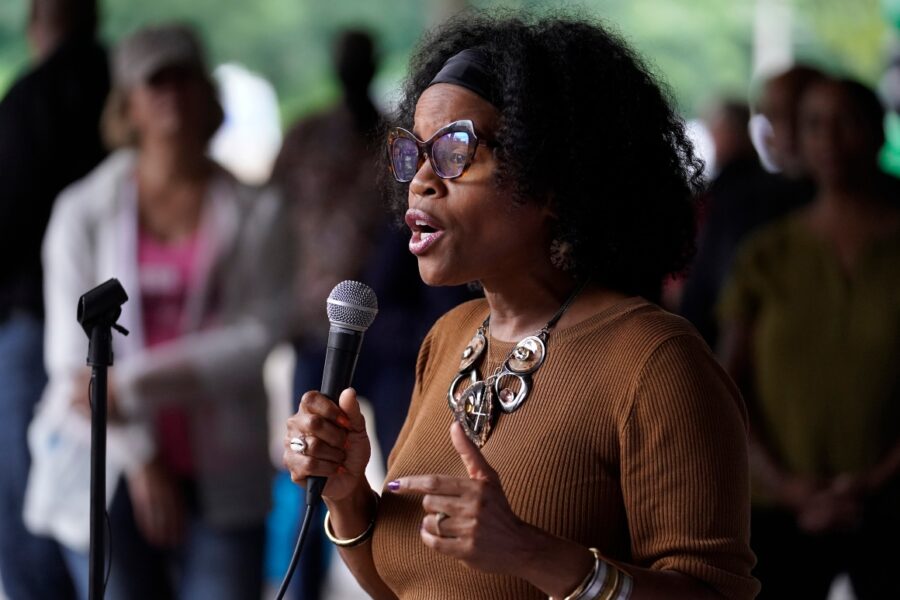 Several politicians called it an “embarrassment of riches” — a level of diversity that’s been years if not decades in the making in a city with a notoriously racist past.

But the nature of this year’s race presents choices that are equally as unprecedented for the city’s political class. And that’s leading to tough conversations, most publicly and prominently among the city’s progressive activists and Black leaders, with less than three weeks left until the Sept. 14 preliminary, nonpartisan election that will cull the field down to two.

Voters could give a full term to Janey, the first woman and first Black person to serve as mayor. The City Council president stepped up when former mayor Marty Walsh went to Washington in March to serve as Labor secretary. Or voters could choose one of the two other Black candidates: City Councilor Andrea Campbell, or John Barros, the city’s former economic development chief who first ran for mayor in 2013.

They could also line up behind Annissa Essaibi George, a former schoolteacher, small-business owner and city councilor who’s the daughter of Tunisian and Polish immigrants. Or they could elevate Michelle Wu, the longest-serving city councilor of the bunch, who’s carved out a lane as the climate candidate and is the closest thing the field has to a frontrunner, as the city’s first Asian-American leader.

Prominent members of the Black community are torn, wondering whether to pool their support behind Janey to keep the first Black female mayor in office, or line up behind several candidates and risk losing the opportunity to finally elect a Black mayor and empower Boston’s predominantly Black and historically disenfranchised neighborhoods.

And then there’s the quandary that faced JP Progressives as the group’s members toggled between Janey, Wu and Campbell. All three are shades of progressive — making for pretty good odds with only five major candidates. But some members were concerned: Would failing to coalesce behind a single progressive give Essaibi George, a more moderate candidate, a berth into the November general election, making it harder for the movement to secure the mayor’s office in the end?

State Rep. Russell Holmes calls it a “Jim Clyburn situation” — where there’s a diverse and qualified field of candidates to pick from and people are looking for community leaders to give a push to those most likely to win and deliver.

“We’re having a very tough choice amongst these five candidates,” said Holmes, who is Black and represents the city’s most predominantly Black neighborhoods. “The JP Progressives thing — this is the same thing happening all across the city.”

The diverse mayoral field is the culmination of an accelerated shift over the past decade, since Rep. Ayanna Pressley became the first Black woman elected to the Boston City Council in 2009.

Four years later, Wu became the first Asian American woman elected to the council, and went on to become the first woman of color to serve as its president. Campbell followed as the first Black woman to serve as council president in 2018 and was still presiding over the legislative body when voters ushered in the first majority-female and majority-minority council in 2019.

But even as the City Council diversified, the mayor’s office has remained elusive to non-white candidates. Sam Yoon, the first Asian American to run for mayor in 2009, fell short against incumbent Mayor Tom Menino. Several prominent politicians of color ran in the first post-Menino mayor’s race in 2013. None of them — including Barros — made it to the final, either, resulting in the white-guy showdown that Walsh won.

“Will we do again what we did in 2013 and not have a Black candidate in the final? I am being asked that everyday. … Do we want to have one voice or do we say we split our voices and see where the chips lie?” Holmes said. “We should have a Black person in the final. That’s just what I’m hearing, period.”

Several prominent Black and Latino leaders and community groups have coalesced around Janey in recent weeks. Nika Elugardo, a Black state representative from Boston who endorsed the acting mayor, said keeping Janey in office past November is a “once-in-a-lifetime opportunity” to “mobilize the most disenfranchised parts of Boston.”

Seeing a Black mayor in action has already “started to melt the ice of people’s cynicism in the neighborhoods that have traditionally been the most disenfranchised and the most sort of stomped on by structural oppression, structural racism and also structural poverty,” Elugardo said.

But Campbell is ceding no ground to Janey in the city’s historically Black neighborhoods, several of which Campbell represents on the City Council. And she’s rolled out her own endorsements from Black leaders over the months.

Atyia Martin, a former Walsh administration official and nonprofit leader, dismissed the notion of having to rally Boston’s Black voters behind one Black candidate.

Barros, too, rejects the notion that Boston’s Black voters need to coalesce around one candidate in order to secure their voice.

“The Black community’s not a monolith — it’s a very diverse community, particularly here in Boston,” he said. “There are going to be multiple candidates who get Black votes.”

Black voters have been essential in getting mayoral hopefuls over the finish line in Boston, which became a majority-minority city this century. And Barros, the son of Cape Verdean immigrants, is focusing particularly on men of color who he believes are being overlooked in a race dominated by women.

But he continues to badly trail his competitors in polling and fundraising, causing some politicians and voters to write him off. Polls show Black voters supporting Wu and Essaibi George, too.

Progressive voters are facing their own split — stuck in some cases at an ideological crossroads between Wu, Janey and Campbell.

Wu’s long endeared herself to the city’s progressives with her calls for free public transit and a city Green New Deal.

“Michelle has a lot of relationships built up in progressive activist circles,” said Jonathan Cohn, chair of the city’s Ward 4 Democrats, which has endorsed Wu.

Wu is a disciple of Sen. Elizabeth Warren, and progressives aligned with her in the mayor’s race similarly tout her policy proposals and her vision for the city’s future as a key reason for their support.

Some of Wu’s progressive supporters feel that Janey doesn’t have a strong enough vision for the long term. Supporters of Janey, who’d only been a city councilor since 2018 and only been in the mayor’s office for five months, admit that’s an area in which the acting mayor needs some work.

“They all have some policy gaps they’re working out. Kim has some catching up to do. And I’ve been working with her team on that,” Elugardo said. But Janey “has a very strong advantage to take action in her position as acting mayor.”

Some also argue that there’s a working-class divide among progressives in this mayor’s race, between “folks who are closest to the inequity and the most impacted by the inequity, and folks who want to fix that inequity but aren’t impacted by it as directly,” said City Councilor Ricardo Arroyo, a Latino who’s endorsed Janey.

Arroyo believes that’s led some progressives to gravitate toward Janey, who lived through desegregation busing and became a teen mom, and Campbell, who excelled through school despite family tragedies and watching multiple family members end up behind bars.

Campbell is attracting progressive support in part as the candidate pushing most strongly for policing reform. But some progressives have balked at her past support for charter schools, or simply see more of their ideals reflected in Janey or Wu.

Essaibi George is the antithesis to all that — a more moderate candidate, at least in this progressive-leaning field, who’s locked up the support of most of the city’s public safety unions and seems to be appealing most directly to the coalition that twice helped elect Walsh.

“We have a big, varied city and she’s got to be the mayor for everybody, so I think being seen as a more centrist [candidate], people can feel a comfort level that she will listen to their concerns and recognize them,” said Katie Murphy, president of the Massachusetts Nurses Association, which endorsed Essaibi George and endorsed Walsh during his mayoral run.

Moderate Democrats have put up a good showing so far this year, from the New York City Democratic mayoral primary to the Ohio special congressional election, and veteran local Democratic strategist Mary Anne Marsh said Essaibi George could continue that streak as a candidate who provides “something for everyone.”

Yet public polls have been few and far between in the mayor’s race, which is technically nonpartisan, frustrating many members of Boston’s political class who are still weighing whether — and who — to endorse with time running short ahead of Sept. 14.

Spring polls showed Wu and Janey leading, but a lot has changed since then — most notably with the pandemic, which was fading from public consciousness when Janey took office but is now resurging. The latest wave of the virus is proving to be a significant test of Janey’s leadership, opening her up to sharp criticism from her rivals over her perceived slowness to act on vaccine and mask mandates.

The lack of clear indicators coupled with the relative newness of the candidates to the city’s political scene is “giving people pause just to see how this plays out,” said Suffolk County Sheriff Steve Tompkins, a major political player in the city who’s yet to endorse.

There is, however, a strong sense that the city’s next mayor will be a woman. And even if the next mayor isn’t a woman, one thing is clear.

“Without a doubt, there was going to come a time when the city of Boston would likely be represented by a person of color in the mayor’s office,” said state Rep. Jon Santiago, who was vying to become the city’s first Latino mayor but dropped out in July. “It looks like this is going to be the time.”