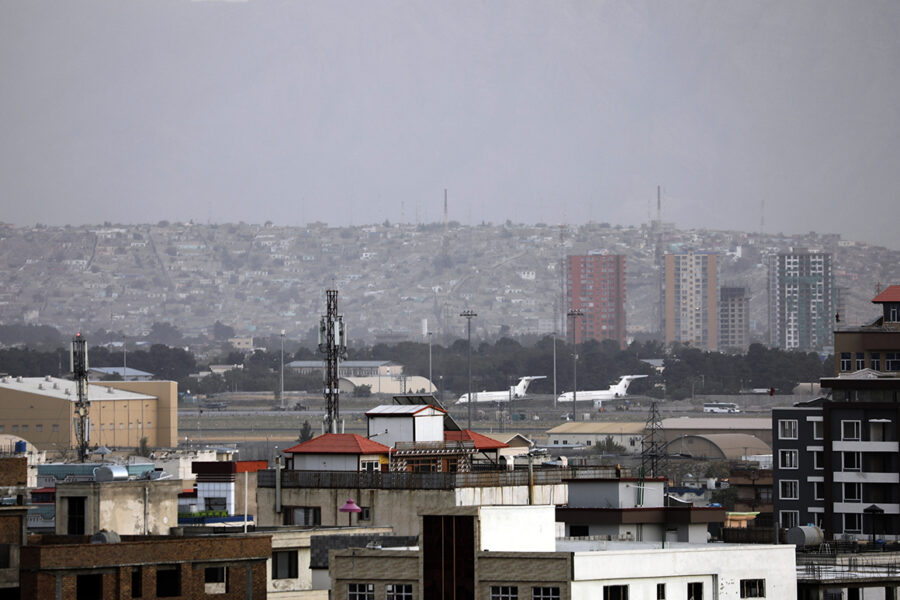 The Pentagon confirmed on Sunday that the U.S. military conducted a drone strike in Kabul, successfully destroying an “imminent” threat to the airport in the Afghan capital where American troops are conducting a massive evacuation effort.

The attack was carried out on the same day President Joe Biden took part in the dignified transfer of service members killed on Thursday by a suicide bomber outside the gates of the airport. It also occurred amid a steady increase in violence ahead of the president’s Aug. 31 deadline for the withdrawal of U.S. combat forces from Afghanistan after nearly 20 years of war — a decision that officials and politicians debated on the Sunday television news shows.

“U.S. military forces conducted a self-defense unmanned over-the-horizon airstrike today on a vehicle in Kabul, eliminating an imminent ISIS-K threat to Hamid Karzai International airport,” Capt. Bill Urban, a spokesperson for U.S. Central Command, said in a statement. “We are confident we successfully hit the target.”

Significant secondary explosions from the vehicle indicated that it contained “a substantial amount” of explosives, Urban added. The military is assessing the possibility that there were civilian casualties.

There were few initial details about the episode, as well as a rocket that struck a neighborhood just northwest of the airport, killing a child. The two strikes initially appeared to be separate, though information on both remained scarce.

The airport has been the scene of much of the chaos that engulfed the Afghan capital since the Taliban took over two weeks ago. After the Islamic State affiliate’s suicide attack that killed more than 180 people, including 13 U.S. service members, the Taliban increased its security around the airfield.

The Thursday attack, which wounded another 18 American troops, marked the deadliest U.S. casualty event there in almost a decade.

Biden, who immediately vowed to retaliate, flew to Dover Air Force Base in Delaware on Sunday to meet privately with the families of those killed, becoming the fourth president to bear witness as the remains of those killed returned to U.S. soil from Afghanistan.

First lady Jill Biden and a host of military and senior administration officials, including Defense Secretary Lloyd Austin and Secretary of State Antony Blinken, joined the president as the “dignified transfer” of remains unfolded, a military ritual for those killed in foreign combat.

“The 13 service members that we lost were heroes who made the ultimate sacrifice in service of our highest American ideals and while saving the lives of others,” Biden said in a statement on Saturday. “Their bravery and selflessness has enabled more than 117,000 people at risk to reach safety thus far.”

National security officials have warned of the “exceedingly dangerous moment” in Afghanistan ahead of the military withdrawal, with both national security adviser Jake Sullivan and Blinken speaking in interviews on Sunday about the dangers of current U.S. evacuation efforts.

“We are doing everything in our power to prevent and disrupt the threat streams that we are seeing and stopping any kind of attack that would endanger the lives of American service members or civilians trying to get into the airport,” Sullivan told Jake Tapper on CNN’s “State of the Union.”

“But all we can do is mitigate, and we are in a period of serious danger given what we are seeing in the intelligence,” he added.

Sullivan noted that Biden was relying on his entire national security team during this “next critical period where we face acute threats as we speak, minute by minute, hour by hour.”

On Saturday, Biden warned that another attack was likely, and pledged that the U.S. would continue to pursue any individuals involved in those attacks.

Blinken issued similar concerns on Sunday, noting that the withdrawal efforts had been “an extraordinarily dangerous mission” from the start.

“This is the most dangerous time in an already extraordinarily dangerous mission, these last couple of days,” Blinken said in an interview on ABC’s “This Week.” “And so, we will do everything possible to keep people safe, but the risk is very high.”

The U.S. is holding firm to its Tuesday deadline. The administration notes that approximately 300 American citizens still remain in Afghanistan who have said they want to leave and whom the U.S. is working to get out of the country. Britain ended its evacuation flights on Saturday.

U.S. military cargo planes continued their runs into the airport on Sunday, ahead of the deadline. However, Afghans staying behind in the country worry about the Taliban reverting to their earlier oppressive rule — something fueled by the recent shooting death of a folk singer in the country by the insurgents.

Amid the increasing violence, Republican lawmakers have criticized Biden’s decision and the withdrawal deadline.

Speaking on “Fox New Sunday,” Senate Minority Leader Mitch McConnell said that the administration had lost sight of why the U.S. went to Afghanistan in the first place.

“We went there to prevent the Taliban from having a regime that would allow terrorists to reconstitute themselves and hit us here at home. It’s been a total success,” McConnell told Chris Wallace. “With the continued deployment of 2,500 people, we were in effect keeping a lid on, keeping terrorists from reconstituting and having a light footprint in the country. The policy was working.”

McConnell went on to characterize the decision to withdraw the U.S. from Afghanistan as “one of the worst foreign policy decisions in American history.”

He wasn’t the only Republican to decry the withdrawal efforts. Sen. Mitt Romney (R-Utah) told CNN on Sunday, “If you focus on what we should do right now, recognize we’re in the position we’re in right now is because of terrible decisions made by two administrations.” He cited then-President Donald Trump’s negotiations directly with the Taliban, as well as Biden’s move to close the Bagram Air Base in Afghanistan.

“You can’t, as one party, end a war. It takes two parties to end a war,” Romney said. “The Taliban and the radical violent jihadists in the world haven’t stopped fighting. They’re going to continue to fight us. The war is not over.”

Similarly, Sen. Ben Sasse (R-Neb.) hit the Biden administration for depending on what he called “happy talk” instead of harsh reality as its basis for Afghanistan policy.

“Joe Biden put our forces at risk by having no plan for how to evacuate,” Sasse said on ABC’s “This Week.” “We are absolutely at risk, and we are at risk because the president has been so unbelievably weak.”

Former national security adviser H.R. McMaster, who served under Trump, said that “we all share responsibility” for the war in Afghanistan.

“And of course, what’s sad about it is that this war ended in self-defeat,” he told host Chuck Todd on NBC’s “Meet the Press.” “I mean, we had a sustainable effort in place several years ago, that if we had sustained it, we could have prevented what’s happening now. But instead, what we did, Chuck, is actually we surrendered to a jihadist organization and assumed there would be no consequences for that. And we’re seeing the consequences today.”

The Taliban have pledged amnesty for all Afghans, even those who worked with the U.S. and its allies, and say they want to restore peace and security after decades of war. But many Afghans distrust the group, and there have been reports of summary executions and other human rights abuses in areas under Taliban control.

The shooting of a folk singer in a tense region north of Kabul was bound to contribute to such fears. Fawad Andarabi’s family said the Taliban shot him for no reason, just days after they had searched his home and drank tea with him.

“There is mounting evidence that the Taliban of 2021 is the same as the intolerant, violent, repressive Taliban of 2001,” she wrote on Twitter. “20 years later. Nothing has changed on that front.”

The Associated Press contributed to this report.