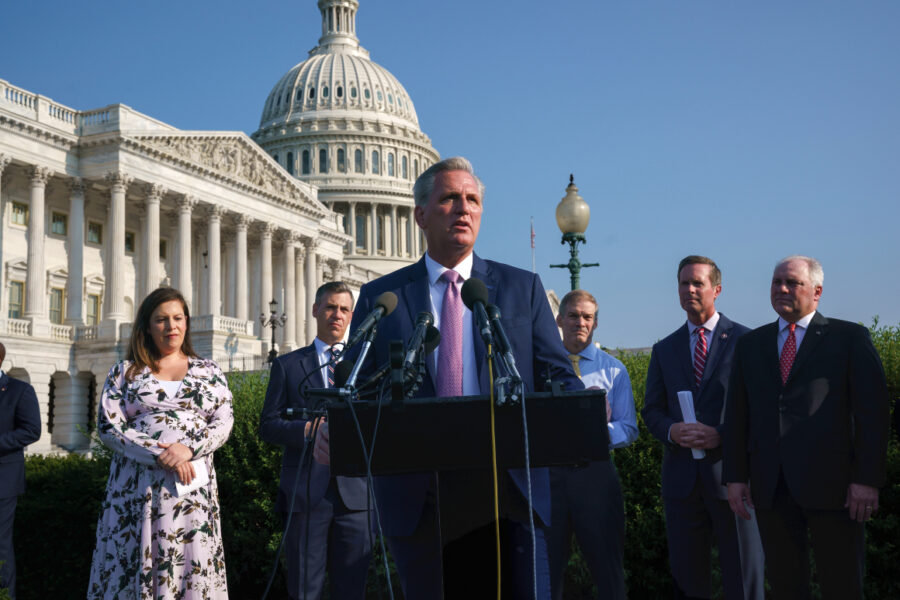 The select panel investigating the Jan. 6 insurrection on Monday asked a broad group of telecommunication companies to preserve records related to the attack — a request that could include communications from some members of Congress.

Apple, AT&T, Verizon and 32 other companies received requests from the Jan. 6 committee for records from April 1, 2020, to Jan. 31, 2021. Select panel chair Rep. Bennie Thompson (D-Miss.) asked the companies for specific individuals’ records, and while the names of those people were redacted from the publicly released orders, Thompson indicated last week that the request for communications of relevant individuals could touch on fellow lawmakers.

Investigators on the Democrat-led Jan. 6 committee are seeking clarity on phone calls between former President Donald Trump and members of Congress during the attack, among other communications. House Minority Leader Kevin McCarthy and Rep. Jim Jordan (R-Ohio) are among those known to have spoken with Trump on Jan. 6.

Nearly three dozen companies, including Verizon, T-Mobile, Gab, Discord and Twitter, received requests from the Jan. 6 select committee to preserve records in a letter dated Monday. While names of covered officials were not included in the public copies of the requests, the panel’s latest bid for information is bound to be politically fraught.

Outraged GOP lawmakers have already called the committee’s interest in communications records of their colleagues an “authoritarian” overreach by Democrats. Although two anti-Trump Republicans now sit on the select panel, most voted against its establishment, and GOP senators filibustered a bill that would have created an independent commission on Jan. 6.

In a Friday letter to Thompson, sent ahead of an expected phone records request, Rep. Jim Banks (Ind.), one of two House Republicans Speaker Nancy Pelosi blocked from serving on the select committee, said the panel’s inquiries had “no conceivable legislative purpose.”

Congress has long had power to police its own members — and often does through the Ethics Committee — though it has rarely taken the step of directly seeking their communications. But Democrats have made clear they view their departure as a warranted response to the Jan. 6 attack. And the select panel’s request asks for a large amount of information, including metadata, text messages, and emails.

It’s the third major request within days from the Jan. 6 committee, which expanded its investigation last week with demands for records from federal agencies and social media companies on the insurrection, extremism and efforts to overturn the 2020 election. The last time such a high-profile committee investigation took the unusual step of seeking congressional phone records was during the first impeachment probe of then-President Trump. House investigators then released call details that included contacts between Rep. Devin Nunes (R-Calif.) and associates of Trump who were connected to his effort to pressure Ukraine to investigate Joe Biden.

Though the committee’s preservation request is broad, it’s unclear how much information the companies will turn over willingly or the panel will ultimately have to take further measures to obtain. (Thompson indicated he would send a more specific request for documents at a later date.) Some of the companies listed, like ProtonMail, have made their ability to encrypt or shield requests from investigators a selling point to their users.

Among the officials whose communications could draw interest from the select committee:

One of the biggest unanswered questions from Jan. 6 is what the White House and Trump were doing that day to respond. News outlets have revealed some of Trump’s actions, but the select committee may try to seek the former president’s calls as it tries to build a more detailed timeline of events on Jan. 6. The only reported information on Trump’s Jan. 6 conversations have come voluntarily from his allies.

Jordan, the top Republican on the House Judiciary Committee and a close Trump ally, spoke to the former president more than once on Jan. 6, as POLITICO reported on Sunday. Although the existence of his calls is already in the public record, the committee could seek to establish an exact timeline and match up his contacts with what is already known about the events at the White House and the Pentagon.

Gaetz, also a close Trump ally, took part in one of Jordan’s phone calls with Trump, according to a source with knowledge of the call. That source said the two lawmakers asked the president to tell his supporters to stand down, an assertion the committee is likely to want more information on.

Perry, who joined other House Republican colleagues in an effort to overturn the election results, also played a role in the turmoil at the top of the Justice Department. He had helped introduce acting Civil Department chief Jeffrey Clark to Trump and told him that Clark was receptive to his baseless claims of election fraud, according to The New York Times.

Brooks took part in the rally outside the White House on Jan. 6 and was also sued by Rep. Eric Swalwell (D-Calif.), who alleged he and other Trump allies incited the insurrection. Brooks denies the allegations and has tried to dismiss the lawsuit, saying he spoke at the rally in his official capacity as a lawmaker. The matter is still pending in federal court in Washington, D.C.

McCarthy’s Jan. 6 call with Trump — and his description to colleagues of Trump’s reply — already figured in Trump’s second impeachment trial earlier this year. Rep. Jaime Herrera Beutler (R-Wash.) said McCarthy described getting heated while urging the then-president to call off his supporters and that Trump essentially defended the rioters by saying they appeared more upset than McCarthy about the election results.

Giuliani also appears to have been involved in the effort to call senators on Jan. 6 as Trump and his allies tried to lean on members of the Senate to object to election results. One such call, in which Giuliani mistakenly dialed another person when he meant to call Sen. Tommy Tuberville (R-Ala.), was published online by The Dispatch.

Pittman was the head of the Capitol Police’s intelligence division during the insurrection, and her handling of the insurrection and the department’s preparation before the riot have come under scrutiny. A bipartisan report by two Senate panels found that officers reported hearing from Pittman only once over the radio during the attack, and not at all from then-Chief Steven Sund.

The Jan. 6 committee is poised to home in on Trump’s specific efforts to overturn the election leading up to that day. And the record is already replete with examples of unusual calls between the sitting president and local election officials tasked with certifying the outcome of the 2020 vote.

Trump browbeat Georgia Secretary of State Brad Raffensperger in early January, a call that Raffensperger himself warned could prompt a criminal probe. He spoke with two Michigan GOP election officials in an effort to convince them to gum up the state’s certification process. And he reportedly attempted to speak with state officials in other states Biden won. The select committee appears interested in Trump’s pre-Jan. 6 communications with these officials as well.

Kyle Cheney contributed to this report.