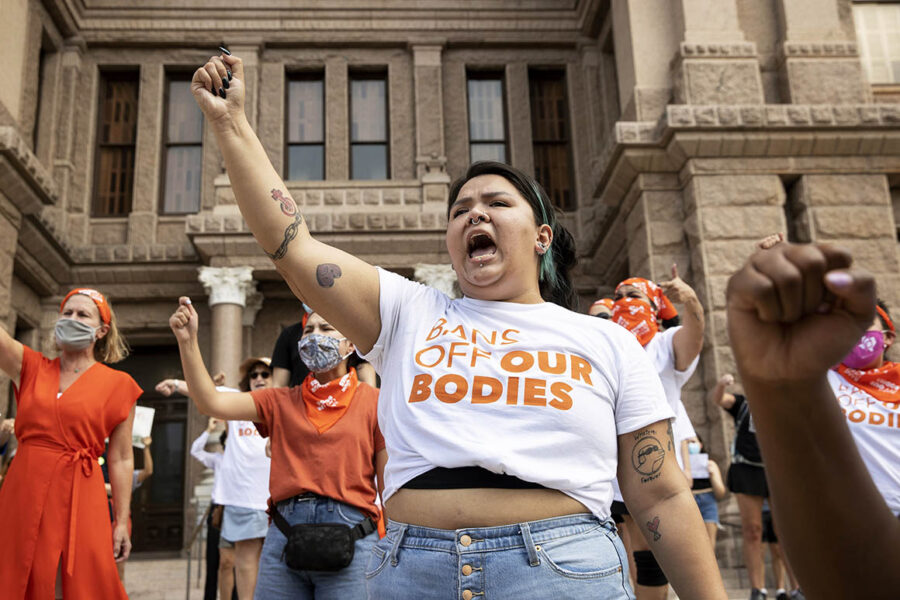 The Supreme Court unleashed a tempest by letting Texas’ near-total abortion ban take effect this week, allowing private citizens to sue anyone they suspect of helping a pregnant person access the procedure.

Hours after justices issued their 5-4 decision early Thursday, top Republicans in Florida, Arkansas and South Dakota said they were examining how the law’s unique “private right of action” enforcement structure could be used for look-alike abortion bans in their own states. Meanwhile, opponents of the Texas law said it’s sowing legal uncertainty across the country and warned it could be adapted for a range of other issues, such as gun control and Covid mask and vaccine mandates.

Yet the law could be struck down by courts long before the red state legislatures reconvene, if abortion rights groups can successfully show that people are being injured by the way the law cuts off access to the procedure. That would require finding people willing to intentionally violate the ban and be plaintiffs in a challenge before the most conservative circuit court in the country and the Supreme Court’s conservative supermajority.

“Is anyone willing to take that risk?” asked Mary Ziegler, a legal scholar at Florida State University who specializes in abortion law. “You would have to be willing to sue knowing that the 5th Circuit is not on your side, that the Supreme Court is probably not on your side and that you could face ruinous consequences if you don’t prevail.”

Groups on both sides of the abortion fight in Texas said Thursday they were not yet aware of any lawsuits filed against people for providing abortions or assisting someone in obtaining one — making it difficult for anyone to have standing to challenge the statute as unconstitutional.

Groups including the American Civil Liberties Union and Planned Parenthood say they’re currently exploring “every legal avenue” for halting enforcement of the law — but may have few options other than recruiting someone willing to violate it or to wait for a suit by an anti-abortion activist or group to prompt a challenge.

“We do know that anti-abortion groups are right now recruiting vigilante plaintiffs to file suits against anyone who they believe to be in violation,” said Julia Kaye, the lead attorney on the case for the ACLU. “It’s very unlikely that we’re going to be in a scenario in which no vigilante lawsuits are brought, even though providers are complying with the law.”

The Supreme Court left open the possibility it could yet strike down the Texas ban, with the conservative majority stressing it wasn’t ruling on the merits of the law when it turned away an emergency petition from abortion clinics to freeze the statute. But the question is whether the court essentially granted a grace period to a law that will cut off access to abortion in the state for weeks or months and invited lawmakers in other states to draft look-alike measures.

Florida Senate President Wilton Simpson said Thursday that “there is no question” Republicans will push for a bill like Texas’ in its upcoming session, and Gov. Ron DeSantis promised to “look more significantly at it” in the weeks ahead. Arkansas state Sen. Jason Rapert said he’s updating a six-week abortion ban he previously introduced to mirror the language of the Texas statute. And South Dakota Gov. Kristi Noem said Thursday that she’s looking at adapting the Texas law for her state. Many red state legislatures, however, would not be able to take up such legislation until they are back in session next year.

The ACLU and other groups have also warned that the Supreme Court’s action could spur states to apply Texas’ legal logic beyond abortion, and pursue similar private-enforcement arrangements in other areas that test constitutional boundaries.

“You could imagine a state banning the sale of guns and authorizing vigilantes to sue gun sellers and buyers,” the ACLU’s Kaye said. “You could imagine a state banning certain statements in online forums and authorizing anyone who sees the post to sue the person who posted it. The sky is really the limit in terms of attacks on constitutional rights.”

But other lawyers cautioned that the high court didn’t guarantee it will tolerate other applications of the private-suit enforcement mechanism.

Jim Bopp, general counsel of National Right to Life, said he expects that the Texas statute will lead to more state abortion limits, but that the legislation is counterproductive because the courts are almost certain to wipe it out down the road.

“You can flat guarantee you’re going to see a lot more civil remedies,” said Bopp. “They would be better and more useful if attached to other forms of law,” he said, citing bans on abortions carried out due to the race, sex or disability of the fetus or performed without parental consent.

Progressives may try to adapt the Texas model to advance legislation addressing guns, hate speech or environmental hazards. But they could find themselves in a similar bind and see their private-enforcement system shut down in weeks or months.

House Democratic leaders responded to the tumult Thursday by vowing to soon vote on a bill that would codify the right to abortion, by putting the protections of the Roe v. Wade into federal law. Speaker Nancy Pelosi argued the move is needed due to the likelihood of other states following Texas’ lead. Yet the Women’s Health Protection Act has virtually no chance of clearing the Senate.

With congressional intervention unlikely, lawyers for abortion-rights supporters were taking a closer look at a cryptic passage Justice Stephen Breyer wrote Thursday in a dissent against letting the Texas abortion ban take effect.

“There may be other not-very-new procedural bottles that can also adequately hold what is, in essence, very old and very important legal wine: The ability to ask the Judiciary to protect an individual from the invasion of a constitutional right—an invasion that threatens immediate and serious injury,” the Clinton-appointed justice wrote.

Courtwatchers said the language undoubtedly amounted to coaching of the abortion-rights camp, but they said the liberal justice could have explained his thoughts a bit more.

“It’s Delphic, at best,” said University of Richmond law professor Carl Tobias, who said the passage might refer to relatively rare legal remedies known as writs of mandamus or prohibition. “It would help if he fleshed it out a bit there, give us a pathway and be explicit about it.”

Harvard law professor Laurence Tribe said Breyer seemed to be observing that there is likely a way for those seeking abortions to vindicate their rights, even if suing judges to block enforcement of the ban may not be the ideal mechanism.

Breyer was saying “the courts have found all kinds of ingenious ways for people to get relief for all sorts of constitutional violations,” Tribe said. “The court is allowing the light to go out before anyone has turned the switch.”