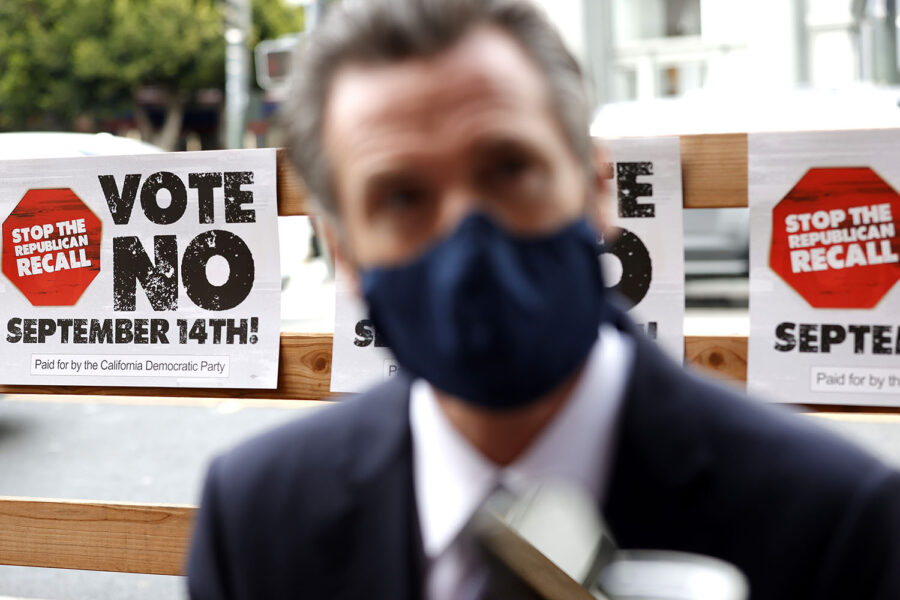 California is less than two weeks away from the second recall election in state history, and the fate of Democratic Gov. Gavin Newsom is hardly certain.

The contest presents Republicans’ best shot in a decade to seize back some control of Sacramento after being shut out of state office since Arnold Schwarzenegger left office in 2011.

The off-year race has generated a ton of intrigue and spectacle on the part of the 45 active candidates seeking to replace Newsom, and the governor’s every move in the past several months has been scrutinized through the lens of its effect on his chances of survival.

Here’s what you need to know about California’s unique, two-step ballot process.

When is the recall?

California’s recall date is Sept. 14. Millions of ballots have been sent out, and voters have until Sept. 7 to mail-in a request for one.

Some of those ballots have already have been cast. Elections officials will count all ballots that are postmarked by election day and delivered within a week of the deadline.

Who is on the ballot?

By definition, the person in the hot seat will be Newsom, who was elected in 2018. If a majority of people vote to recall him, the question shifts to who should be selected to fill out the final year-plus of his term.

Newsom is barred from being on the list of recall candidates — if voters back his recall, he’s done. Candidates only need a plurality of votes to win the recall, opening up the possibility that someone wins with just a fraction of the ballots cast to keep Newsom as governor.

Party leaders made the strategic decision to discourage Democrats from running as replacement candidates in an effort to consolidate support for Newsom. Without mainline Democratic politicians on the ballot, the leading option is YouTuber Kevin Paffrath.

But much of the attention has been on the conservative candidates. Reality star Caitlyn Jenner got a burst of coverage early in her bid but has been dogged by questions of her policy acumen and commitment to running after she temporarily left the campaign trail to film a show in Australia. 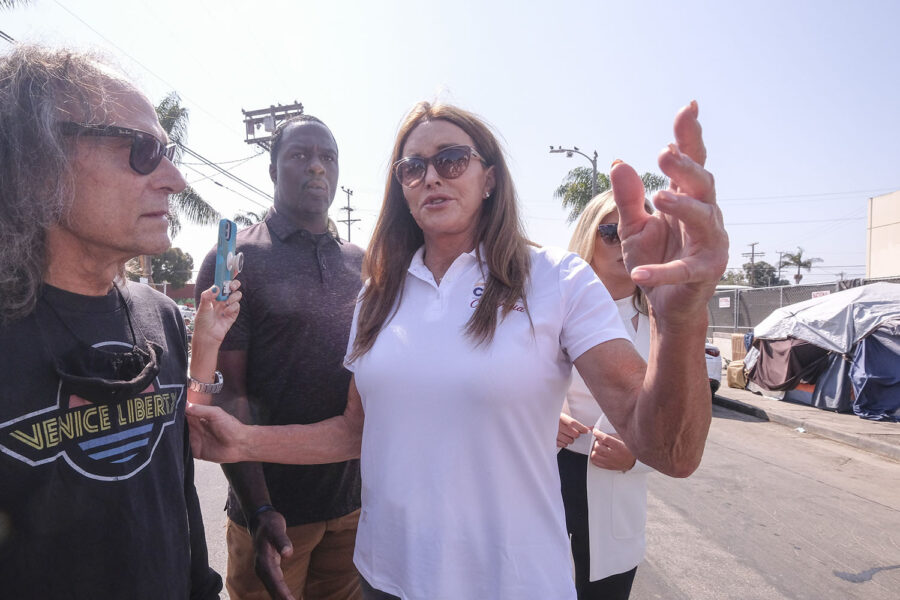 Libertarian radio host Larry Elder emerged as a leading Republican contender in recent weeks. He has since faced calls to drop out from other Republicans after POLITICO reported that in 2015 he allegedly pulled out a loaded gun during an argument with his then-fiancé — an accusation Elder has denied — and his past comments about women have resurfaced in various media reports.

What are the prospects of Newsom getting recalled?

Public polling has consistently shown that Newsom is favored to stave off the recall, though recent surveys have put the anti-Newsom forces within striking distance. A July poll of likely voters from the Berkeley Institute of Governmental Studies showed just a 3-point margin for keeping the governor. A separate poll released Wednesday night from the Public Policy Institute of California, which considered a broader group of likely voters, showed a larger 58-39 gap in Newsom’s favor.

Republicans are confident they have an enthusiasm advantage, and Democrats in recent weeks have stepped up outreach to the party’s base in order to combat voter complacency and avert an upset.

Democrats were planning to deploy Vice President Kamala Harris, a California native, and President Joe Biden to campaign on Newsom’s behalf. However, the tumultuous final days of the Biden administration’s withdrawal from Afghanistan has complicated those plans — depriving Newsom of some political star power down the stretch.

How did California get here?

In some ways, the recall effort was a major beneficiary of the chaos caused by the global pandemic.

To be successful, a recall petition needs to generate enough signatures from registered voters equivalent to 12 percent of the turnout in the prior gubernatorial election, or slightly less than 1.5 million valid signatures in Newsom’s case.

The conservatives who organized the campaign received a big break last year when a judge afforded them several additional months to gather the petitions necessary to trigger a recall. During that extended window, frustration with California’s public health restrictions — and the image of Newsom attending a soiree at the tony French Laundry restaurant — helped fuel the signature drive that had previously struggled to gain sufficient traction.

Newsom’s standing has waxed and waned throughout the past year and a half, based in large part on how the public has judged his handling of the pandemic.

But the seeds of the recall were planted more than a century ago when Progressive-era reformers enacted the law as a way to increase direct democracy and give the public a way to check those in power. Recall efforts have since become a fact of life for California governors, though they have rarely achieved critical mass.

How has it worked in the past?

California’s only other recall came in 2003, when voters ousted Democratic Gov. Grey Davis as he struggled to manage an energy crisis. Schwarzenegger won the race to replace him.

The famous actor emerged from a field of more than 135 candidates — though all but a handful received token support, at best — on the back of his strong name-ID and long-standing reputation as a Republican with moderate stances on cultural issues. After serving out the bulk of Davis’ term, Schwarzenegger comfortably won a full term in 2006. 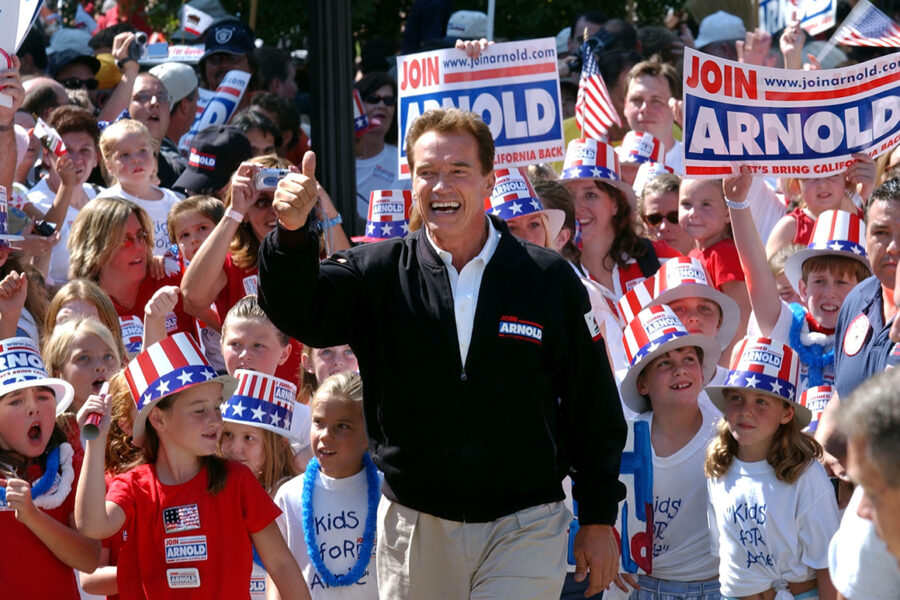 As in the 2021 recall, voters were given two questions: an up or down choice on whether Davis should be recalled and a list of candidates to replace him.

More than 55 percent of the 9.4 million votes cast in 2003 were in favor of recalling Davis, and Schwarzenegger garnered roughly 1.5 million more votes than the next-closest replacement candidate.

The biggest shift in the nearly two decades since is that the state’s body politic has drifted left.

Prior to the 2003 recall, Democrats outnumbered Republicans 6.6 million to 5.2 million. By July of this year, that advantage had widened considerably and the GOP is now outnumbered 2-to-1. There are 10.2 million registered Democrats, 5.3 million Republicans and 5.1 million voters who list no party preference.

As such the GOP has seized on the recall as perhaps its best opportunity in a generation to deliver a blow to Democrats in one of the nation’s bluest states.

This year’s recall is also being held a few weeks earlier, as the 2003 contest was held on Oct. 7.

When will it be decided?

That is an open question, given California’s expansive use of voting-by-mail, and it depends on how close the results are.

Davis conceded to Schwarzenegger on the night of the recall and the results were officially certified more than a month later. Schwarzenegger was inaugurated on Nov. 17, 2003.

Republicans in California and elsewhere have also become more skeptical of the integrity of American elections over the past year or so, and potential legal challenges if the recall results are relatively close could be a complicating factor that elongates the process.

What have the courts said?

In addition to allowing the recall petitioners extra time to gather signatures, the court system has been busy sorting out the ground rules for the September election. Judge James P. Arguelles ruled against Newsom in July after the governor sought to get his Democratic Party affiliation listed next to his name on the recall ballot.

A 2019 law signed by Newsom allows elected officials who are being subjected to a recall to list their party affiliation, but Newsom’s team missed the window to do so and challenged the law in search of a workaround.

Elder went to court to ensure his place on the ballot after California election officials sought to disqualify him because of redactions on tax documents he submitted as part of his candidacy. A judge ruled that the secretary of state’s office improperly applied a law for gubernatorial candidates in a “direct primary election” — but not special contests like a recall.

What is this going to cost?

The California Department of Finance estimated in early July that the administration costs of the recall will be roughly $275 million.