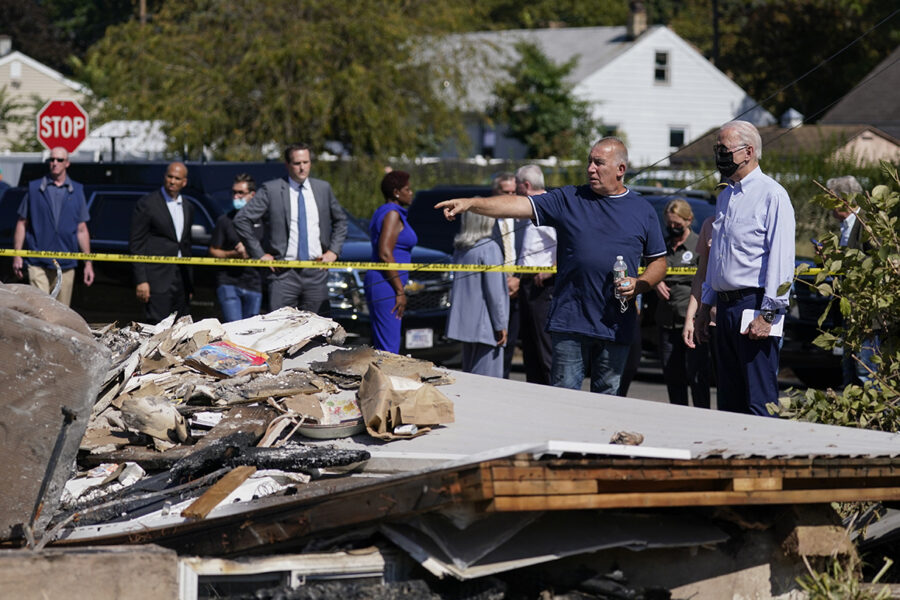 MANVILLE, N.J. — President Joe Biden on Tuesday surveyed the damage caused by last week’s deadly storms in New York and New Jersey, promising to help flood-ravaged communities he said are likely to get hit again and again by a changing and violent climate.

Democrats, including Biden, argued the storms spawned by the remnants of Hurricane Ida were uniquely destructive and should make climate change a meat-and-potatoes issue before similar storms strike again. While hurricanes have struck the Northeast before, officials were stunned by the record rains that quickly fell, overwhelming predictions, expectations and the ability to act.

Some areas of the region saw as much as 10 inches of rain fall in a matter of hours.

Biden argued that now is the time to take prompt action, including on his infrastructure plans.

“This is an opportunity,” Biden said as he met with officials in Hillsborough, N.J., before touring nearby Manville. “The country has finally acknowledged the fact that global warming is real, and it’s moving at an incredible pace, we’ve got to do something about it.”

The destruction from heavy rain and flooding from Ida’s remnants was “incredible,” and the losses “profound,” the president said. In New Jersey, 27 people were among the dozens killed across the Northeast.

In New Jersey, Biden spoke with several people who said they had lost their homes and were lucky to escape the floods with their lives. In New York, his message was similar: He hoped Ida’s destruction could serve as a wake-up call for climate skeptics.

“Sometimes my mother used to say out of everything bad, something good will come if you look hard enough for it. Well, I think we’ve all seen, even the climate skeptics are seeing that this really does matter,” Biden said in East Elmhurst, Queens.

The president’s stops were the latest in a series of visits to communities hit by Hurricane Ida or its remnants. Last week, he visited other scenes of destruction in Louisiana, near where Ida came ashore as a Category 4 hurricane. When Ida’s remnants reached the Northeast, few people had any idea it would end up being more deadly.

The death and damage that followed has prompted calls for efforts in New Jersey and New York — states with Democratic governors and legislatures — to plan better and prepare more for future storms. These efforts, if they come, would echo Biden’s own ambition for an infrastructure package that hardens the nation for a changing climate while working to decrease greenhouse gas emissions that cause it.

These plans are more tangible than far-off climate agreements reached in Paris or Kyoto over the past decades — agreements the United States has failed to abide by in some way or another.

Those deals were meant to prevent the worst of climate change, but it may be too late.

“You can’t go back and restore to what it was before. Because another tornado, another 10 inches of rain is going to produce the same kind of results,” Biden said.

Biden said the U.S. had reached the moment climate experts have been warning about for decades. The country is now in “code red,” he said. “The nation and the world are in peril.”

In Manville, a New Jersey community about an hour outside of New York City, the president spent about 30 minutes touring several residential blocks of wreckage. He was accompanied by New Jersey Gov. Phil Murphy, Sen. Cory Booker (D-N.J.) and other members of the New Jersey congressional delegation.

Murphy said his state faces a “long road to recovery.”

“We also know that you and your administration, and our administration here in New Jersey will stand shoulder to shoulder with these individuals on that long road until they’re back, standing tall again,” the governor said.

Nearly as soon as Biden exited his motorcade, he was embracing flood victims who stood among their ruined homes on tree-lined streets along the Raritan River and one of its tributaries, the Millstone River.

“It’s incredible,” Biden said after visiting what was once the home of Meagan and Caesar Dommar and their 4-month-old daughter, Lila.

Their home flooded and then exploded — fires often follow flooding because of damage done to electrical systems or gas infrastructure. Luckily, the Dommars had left.

Down the street, the explosion shook Robert and Linda Donnelly’s house where they had huddled on the second flood with six cats and a dog as water rose on the floor below. When they felt the blast from the Dommar home, they decided to call for help.

The Donnellys said they were rescued by boat while much of the community remained underwater. The rescue boat hit a car covered by opaque brown floodwaters and shattered its window.

They’ve lost three cars, including one Robert Donnelly drives for Uber as a side job.

The couple said they’ve had trouble filling out the federal forms necessary to get help, but that the president, Booker and FEMA Administrator Deanne Criswell had all said the federal government would be there for them.

After the president left, Linda Donnelly said she isn’t inclined to rebuild. Manville and some surrounding communities have seen catastrophic flooding before, including during tropical storms Floyd in 1999 and Irene in 2011, but the recent flooding hit harder and faster than the Donnellys had expected.

“I would be afraid any time it rains,” she said.

Myah Ward contributed to this report