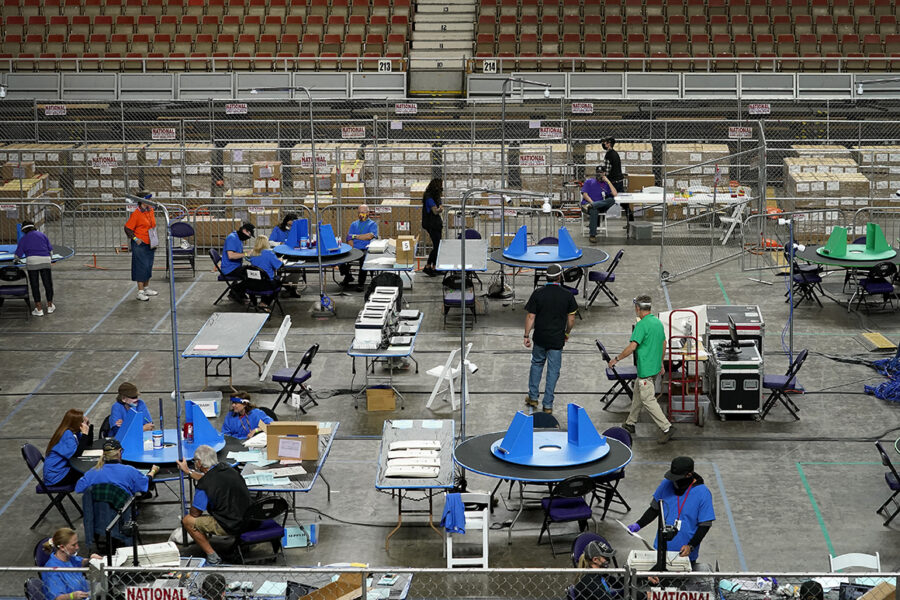 GOP legislative leaders in key battleground states are increasingly embracing 2020 election investigations that they once held at arm’s length, as Arizona Republicans await a long-delayed final report from their own conspiracy-tinged “audit.”

Top Republicans in Pennsylvania and Wisconsin have recently thrown their support behind new hunts for fraud or irregularities in the last election. Pennsylvania state Senate President Jake Corman sidelined a prominent Republican backbencher who had tried to lead an investigation and instead empowered a committee chair to launch one with his support. That effort is hiring vendors and scheduling hearings.

There is no mechanism to actually overturn the certified results of the 2020 election. But what these investigations could do is fuel former President Donald Trump’s lies about the election or prompt new efforts to enact state voting restrictions. Corman — who has called for a 2020 election review since November — recently told a conservative radio host that he had spoken with Trump about the efforts, describing the former president as “comfortable where we’re heading.”

It’s the next stage in GOP efforts to export the Republican election review in Arizona elsewhere, after state legislators from around the country made pilgrimages to Arizona to see the Republican state Senate’s process there. Though local Republican officials in Maricopa County, as well as Democrats in the state, have derided the Arizona “audit” as a conspiracy-tinged sham seeking to undermine the 2020 election results, GOP leaders in other states are now giving their blessing to similar investigations, offering significantly more heft than earlier pushes from rank-and-file legislators, including more public funding, more staff time and potentially more legal weight.

“It’s disappointing, because part of the burden of leadership is killing bad ideas that might be popular with the base,” said former Kentucky Secretary of State Trey Grayson, a Republican who has been sharply critical of the Arizona review and other efforts to discredit the 2020 election. “When they put their imprimatur on it, it’s a signal to everybody that they think that this is important.”

Trump has cranked up the pressure on GOP legislative leaders to take these actions this year: He has previously attacked both Corman and Wisconsin state House Speaker Robin Vos for being insufficiently supportive of his drive to undermine the 2020 election. The “stolen election” myth remains an animating factor among Republican grassroots across the country.

In Wisconsin, Vos’ GOP-controlled state House recently approved $676,000 in taxpayer funding for a 2020 election investigation led by a former state Supreme Court justice. Vos, too, has spoken with Trump and promised to keep him “updated on our investigation.”

“Hopefully the results [in Arizona] … will be a springboard for us,” Corman said in the recent interview with the pro-Trump radio host Wendy Bell. “Give us momentum, make it harder for courts to shoot us down, if results have happened in other states that have seen this.”

As other state Republicans start their work, though, their counterparts in Arizona are bogged down in significant delays, infighting and conspiracy theories.

A final report from the reviewers looking at Maricopa County’s ballots was initially expected to be delivered to the state Senate on Aug. 23, months behind the original schedule. Critics of the review — including the state’s Democratic secretary of state and the top elections official for the county, a Republican — published a series of prebuttals days before the expected arrival of the report, arguing that the entire review was poisoned and any conclusions couldn’t be trusted.

“Procedures have been modified and changed throughout, observer and media access has been inconsistent and limited, and the process has been opaque,” read the prebuttal from Arizona Secretary of State Katie Hobbs, a Democrat. “It was unnecessary and has undermined public confidence in accurate and secure elections that were conducted in 2020.”

But a final report was not delivered on Aug. 23. That day, Republican state Senate President Karen Fann issued a statement announcing delays due to contractor Doug Logan — the CEO of Cyber Ninjas, the previously little-known firm tasked with running the Arizona effort — and two other members of Logan’s team testing positive for Covid-19 and becoming “quite sick.”

Fann did not respond to an interview request seeking details about when the report might come. But an attorney representing the Arizona state Senate suggested in a Wednesday court hearing that the report is not imminent, the Arizona Republic noted. The attorney, Kory Langhofer, said that one volume of a planned three-volume report has yet to be written, and it will be “at least two weeks” before a final report is completed.

The Republic also reported that an election conspiracy theorist was hired at the end of August to review signatures on ballot envelopes. According to a contract reviewed by the Republic, the contract for that work called for $25,000 paid up front and $25,000 on Sept. 20, when work is completed.

Maricopa County has also been engaged in a battle over state Senate subpoenas, which the county says are unnecessary. Attorney General Mark Brnovich, also a Republican, said the county must comply by late September or lose some state funding.

In Pennsylvania, Corman put state Sen. Cris Dush in charge of a “full investigatory audit of recent elections.” Dush chairs the state Senate Intergovernmental Operations Committee, which has opened a website to encourage “voters to come forward if they have witnessed voter irregularities or other election improprieties firsthand,” and is in the process of scheduling a hearing with the Pennsylvania Department of State “to examine the impact of last-second guidance sent to counties before the 2020 General Election,” according to a statement.

Dush’s office directed an interview request to Corman’s office, and Corman was not made available for an interview. But a Corman staffer, who spoke on the condition of anonymity, said the process in the state would be two-pronged: a review similar to what was done in Arizona, which included hiring an outside vendor to look at ballots and potentially voting equipment; and a second prong that would investigate the decision-making of the Pennsylvania Department of State during the election. 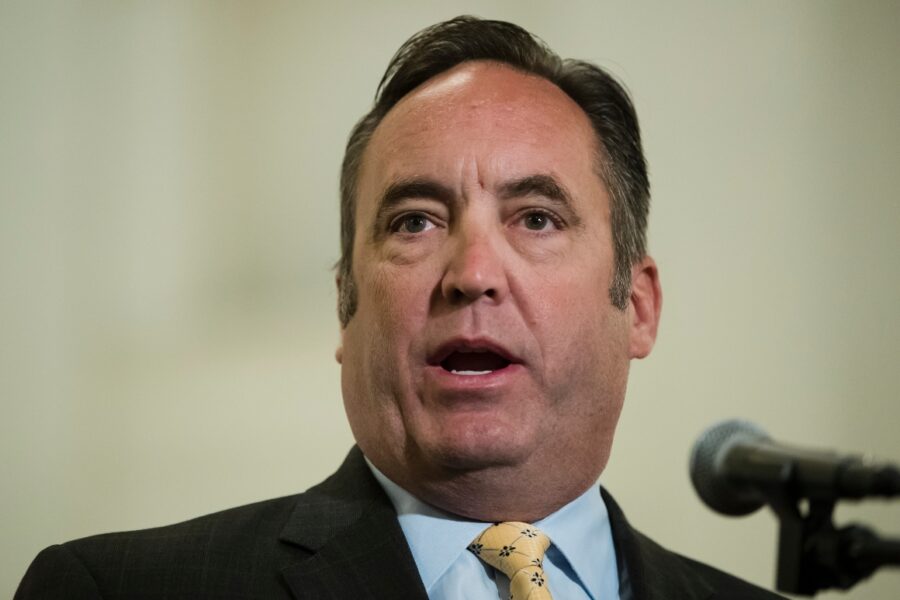 In an interview with former Trump adviser Steve Bannon on Thursday, Corman said the investigation would be willing to use subpoenas to get information from the state elections officials, expecting them to be uncooperative. Corman said the first hearing would be held Thursday.

The Corman staffer stressed there would be distinctions between the Arizona effort and the one in Pennsylvania. The staffer said that the process to select a vendor for the ballot review is ongoing, but that he was “100 percent certain” Cyber Ninjas will not be selected and that the “expectation” is that the state Senate will pay for it — as opposed to nonprofit groups backed by Trump allies, which funded the Arizona review. The staffer said there is no hard timeline for the Pennsylvania GOP effort, but the hope is that it would be wrapped up by Christmas.

In Wisconsin, the investigation backed by Vos, who did not respond to an interview request, is one of three digging into the 2020 election. The Republican-led elections committee and the state’s Legislative Audit Bureau are also attempting their own reviews.

The recently approved contract in Wisconsin, which was first reported by the Associated Press, indicated that the Vos-blessed review would also be looking at voting machines. The contract includes $325,000 set aside for a “data analysis contractor,” under the heading “voting machines.”

Former Wisconsin Supreme Court Justice Michael Gableman, who is leading the investigation, has previously said he traveled both to the Arizona review and to a “cyber symposium” hosted by Mike Lindell, the close ally of Trump who has become one of the nation’s most prominent election conspiracy theorists since 2020. “I learned a lot there that will be helpful to my investigation,” Gableman told the AP.

Text messages from leaders of the Arizona effort, which were released as part of an open-records lawsuit from the watchdog group American Oversight, also appear to confirm that Gableman was in contact with the Arizona team.

Inside and outside of Pennsylvania and Wisconsin, Republican lawmakers and party leaders remain under intense pressure from Trump and his supporters. Corman was repeatedly chided by Bell, the conservative radio host, throughout their interview for not moving fast enough.

The former president is also speaking with leaders in other states. The Detroit News reported that Meshawn Maddock, the Michigan Republican Party co-chair, told a meeting of local Republicans that party Chair Ron Weiser had spoken with Trump about a review in the state.

“President Trump called and spoke to Chairman Weiser, and they had a conversation,” Maddock told the group, according to a recording posted by the News. “And Chairman Weiser said that he’s going to pay close attention to what happens coming out of Arizona.”

Maddock noted that President Joe Biden’s margin of victory was significantly larger in Michigan compared with Arizona. “I think it was a fair thing for the chairman to say to the president, ‘Let’s see what happens in Arizona and we’ll look at it again,’” she said.

Earlier this year in Michigan, a Republican-controlled state Senate committee also looked into fraud allegations. The committee published a report in June saying they were unsubstantiated. “At this point, I feel confident to assert the results of the Michigan election are accurately represented by the certified and audited results,” state Sen. Ed McBroom, the chair of the committee, wrote in a letter accompanying the report.

The former president made his displeasure apparent: He called McBroom and state Senate Majority Leader Mike Shirkey “RINOs” who “will pay at the polls, especially with primary voters and expected challenges.”