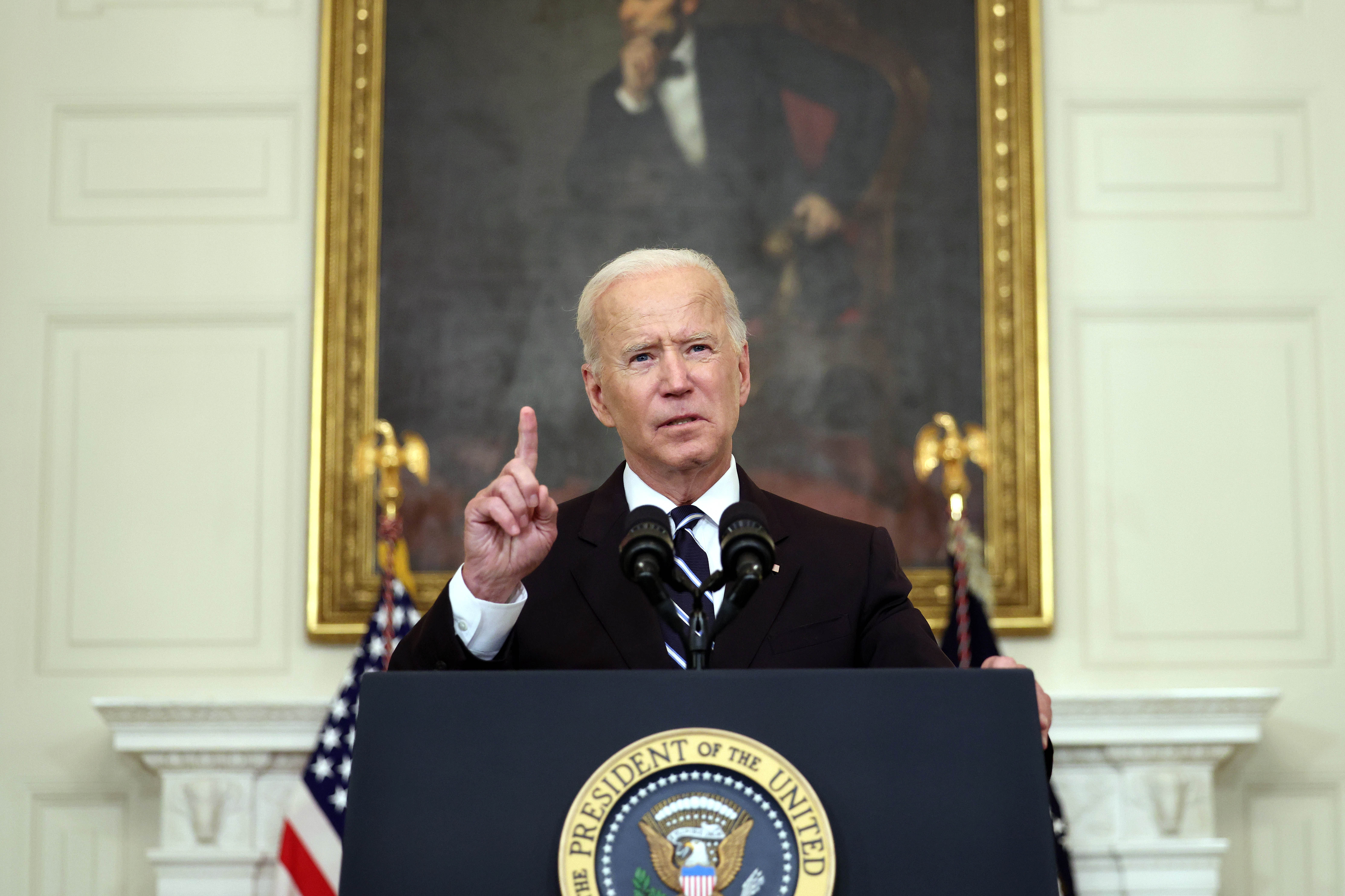 Joe Biden finally figured out he’d been talking to the wrong people.

For months, it was the vaccine-resistant that the president treated with kid gloves, sprinkling words like “unity” into his remarks about fighting the pandemic and sidestepping others, like “mandate,” for fear he’d scare off vaccine holdouts.

In that time, Covid-19 case numbers surged. The hard-core opposition was largely unmoved. And those who got vaccinated? They’re now helping drive down his poll numbers.

That’s why Americans are seeing the president take the sharpest course correction to date on a pandemic that has fully reemerged, threatening to derail nascent economic growth and dragging down Biden’s approval rating along with it.

“He’s going as far as he can in calling out the true enemy. The true enemy is one wing of his opposition,” said Paul Maslin, a pollster and consultant — using stark language reflecting Democrats’ rising level of fury and frustration with the vaccine holdouts.

In remarks at the White House Thursday evening, Biden scolded the vaccine resistant, saying the punitive action was the fault of Americans who couldn’t bother to play by the rules. Instead, he said, they played politics with a life-saving vaccine, endangering loved ones and coworkers. He then announced a wide-ranging raft of mandates, including all federal workers and even private companies that employ more than 100 people. Those who don’t comply could face fines.

Biden underscored that “a 25 percent minority” — some 80 million Americans — hadn’t been vaccinated.

“That 25 percent can cause a lot of damage, and they are,” Biden said. “The unvaccinated overcrowd our hospitals, are overrunning the emergency rooms and intensive care units, leaving no room for someone with a heart attack, or [pancreatitis], or cancer.”

And he offered stern words for rowdy travelers who’ve been captured on video railing against mask requirements: “And by the way,” Biden admonished. “Show some respect!”

It was a bringing down of the hammer that some Democrats have been urging. For some, Biden still took far too long to get there.

“I don’t know why we’re here weeks later as if some light bulb just went off last night. It’s been a 1000-watt bulb for months now,” said Philippe Reines, a Democratic operative and longtime Hillary Clinton hand, who noted that it was the first time he’s been critical of Biden or his White House in two years. “I think there are a lot of people who are huge fans of the administration who question why they didn’t do this 30, 60, 90 days ago?”

The simplest answer is that while public and private polls have consistently shown fairly strong support for vaccine mandates, other numbers have now fallen: Biden’s approval ratings. At 44 percent, Biden’s polling average is down several points in recent weeks. So there’s little political risk to mandates for a risk-averse administration. And as far as policy options, there aren’t many left.

So instead of leaning harder on Americans who feel like they’ve done everything right — those who wear masks and got their shots and are likely supporters of Biden and Democrats to begin with — he’s putting the onus on the unvaccinated and the Republican officials, particularly governors, who are standing in his way.

“We can’t allow a radicalized minority that is anti-science and anti-reason to drive policymaking, or no issue of national importance will ever be effectively addressed,” said Ben LaBolt, the former Obama spokesperson and Democratic strategist, adding that Americans will judge Biden based on how he manages the pandemic and how the economy performs. “Here he is taking strong action to move both of those outcomes in a positive direction.”

The reasons for the White House’s prior hesitancy on mandates are numerous. As president-elect, Biden said in December that he wouldn’t impose them, locking himself into a position — at least temporarily.

Another reason: The administration simply miscalculated. The White House thought its vaccine quest would be going better by now, as evidenced by a premature 4th of July celebration.

And there were missteps. In May, the administration lifted mask mandates and guidance. While the new guidance was meant only for those who were vaccinated, it soon became clear that unvaccinated individuals wouldn’t voluntarily wear masks without mandates in place. And as the summer weeks wore on, more and more parts of society opened up for business, without requiring masks. This was all at a time when the White House was still months from achieving its goal of vaccinating 75 percent of adults.

Even as officials reviewed their options for mandates, they needed to ensure they were on sound legal footing. They didn’t want to scare away Americans still potentially open to getting vaccinated. Senior administration officials on Thursday cited OSHA emergency standards that say a standard (vaccination) is necessary when employees are “exposed to grave danger,” of Covid-19. Senior administration officials estimate the new mandates affect two-thirds of the U.S. workforce, though opponents are already threatening court action.

Biden’s more aggressive posture follows steps taken by Democratic governors and mayors, who have sought to go on the offensive as the Delta variant surges. Most notably, California Gov. Gavin Newsom’s widening lead in his own recall election materialized after he started running on mandates and pushing back on opponents to such vaccine requirements.

Vice President Kamala Harris joined Newsom for a rally in California this week, urging voters to reject a recall election that was fueled, in large part, by Newsom’s handling of the virus, including steps that some business owners saw as overly onerous.

In recent weeks, Newsom and Democrats there have reframed the race as literally a life and death decision, pointing to mandate resistance from the Republican field of gubernatorial contenders and contrasting it with Newsom’s strict orders for vaccinations and masks. Across the state, those moves have had a big impact. San Francisco schools, for example, have vaccinated the vast majority of their students — and in turn reported zero Covid outbreaks as of Thursday. The Los Angeles school district is moving to require all students 12 and older to get the vaccine.

“This election is a choice about life and death,” Newsom said at the event with Harris on Wednesday, directly holding his state’s health outcomes up against those of Texas, Florida, Tennessee, Alabama and Georgia.

That messaging, Maslin said, helped seal up Newsom’s numbers in the last month or so.

“They started to really make a distinction between what Newsom had done on Covid and what Larry Elder and some of these other Republicans believe and what they would do,” Maslin said. “If he wins by a significant margin, that’s going to tell you something next week.”

The Biden-Newsom storylines converge in earnest when the president joins the governor Monday in Long Beach, Calif., a city struck in unique and tragic ways by Covid. Last year, Long Beach Mayor Robert Garcia, a surrogate for both Biden and Newsom, lost his mother, Gaby O’Donnell and his stepfather, Greg O’Donnell, to the virus within weeks of each other.

Biden’s advisers had long seen his handling of Covid as one of his strengths in polls.

A super PAC supporting the president conducted polling in August that tested support for large companies requiring their employees to get vaccinated in five battleground states — Arizona, Georgia, Pennsylvania, Michigan and Wisconsin — that went for Biden after voting for Donald Trump in 2016. It was favored by a solid majority of voters in all five of the states. A separate AP/NORC poll shared widely by Biden aides and advisers on Twitter Friday found strong support for vaccine mandates across several corporate and government sectors.

But Biden’s advantage is at risk of becoming a real liability if he can’t bring the virus to heel. It risks driving greater polarization of vaxxed and unvaxxed Americans, a dynamic further complicated by uncertainty over booster shots for the vaccine.

The mandates stand to further alienate the unvaccinated and give Republicans a potentially potent tool to animate their midterm voters. Several GOP governors have already blasted the White House’s new mandates, as did Republican leaders in Congress like Kevin McCarthy (R-Calif.) who declared that Biden has “made small business an enemy of his administration” and called the new proposals “flat-out un-American.”

Almost immediately after Biden’s announcement, the Republican National Committee said it would mount a legal challenge. Other conservative outfits joined in the chorus of condemnation, with the head of Turning Point USA, a group that organizes conservative students, saying it also would file a lawsuit on behalf of its 170-member staff.