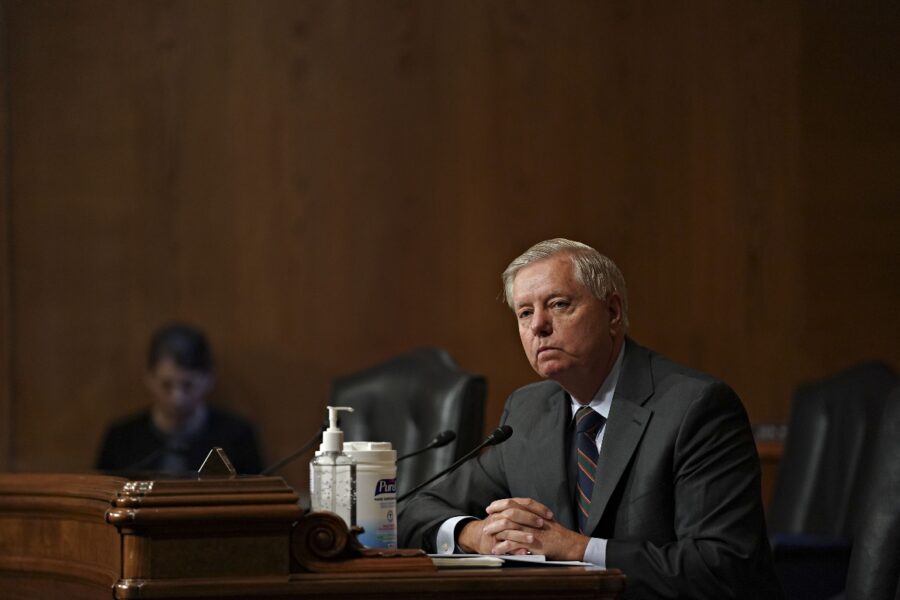 Lindsey Graham, best known for his Capitol deal-making forays and propping-up of Donald Trump, has a new cause célèbre these days: the man who claims to be Afghanistan’s legitimate president.

After the Taliban swept into power in Kabul, the South Carolina GOP senator began working behind the scenes to build support in Washington foreign policy circles for Amrullah Saleh, the Afghan opposition leader spearheading the anti-Taliban resistance based in the northeastern province of Panjshir.

In a bid to legitimize the Taliban opposition, Graham has been working to connect Saleh and Ahmad Massoud, the 32-year-old commander of the de facto resistance forces, with high-ranking U.K. and Indian diplomats as well as influential media figures. That included playing the role of TV booker — Graham secured Saleh an Aug. 27 slot on Sean Hannity’s Fox News show, where he pleaded for American assistance as his forces try to bolster the remnants of the U.S.-backed Afghan government that collapsed last month.

Multiple lawmakers and lobbyists tipped POLITICO off to Graham’s efforts, and the senator himself confirmed his work in his characteristic free-wheeling style. Such freelance PR from a minority-party senator underscores the precarious status of the debate in Washington about engaging with the Taliban-led government in Kabul. It also shows that, even with Trump out of power, the gregarious Graham has a unique ability to influence the capital’s political machinery.

“I want his voice out,” Graham said of Saleh in an interview this week. “I’m gonna go all in. [The Taliban are] holding our people hostage. They’re a terrorist group. They’re a radical Islamic jihadist group. And if we empower them, it will hurt us all over the world.”

Graham has a partner in his pro-resistance work, Rep. Michael Waltz (R-Fla.), a former Green Beret with Afghanistan combat experience who got Massoud booked on another Fox News show last week. The Taliban’s rush to cut off cell and Internet service in the region scuttled that appearance.

Saleh and Massoud’s fight to survive in Taliban-controlled Afghanistan is a bleak one. Panjshir fell to the Taliban earlier this month, and Saleh, 48, hasn’t been heard from in over a week in part because communication lines have been all but destroyed. While the resistance forces haven’t conceded defeat, there are reports that Taliban fighters are executing fighting-age men in Panjshir — including Saleh’s brother, who was shot dead at a Taliban checkpoint last week.

There are no indications that the Biden administration is prepared to help the Panjshir resistance, especially given its wobbly status after being overrun by the Taliban.

Throwing U.S. support behind Saleh and Massoud’s forces would mean wading back into a war that President Joe Biden has made clear he wants out of — and could risk even more fraught relations with the Taliban, with whom the U.S. needs to help facilitate remaining evacuations. Biden has also made clear that the Taliban should work to prevent the country from once again becoming a safe haven for terrorist groups seeking to attack the U.S. homeland.

Graham’s critics have long slammed the hawkish senator as a warmonger given his views on Iran and Syria in particular, and his efforts to back the anti-Taliban resistance are certain to prompt similar jabs. But Graham insists that a civil war in Afghanistan is inevitable, and that Biden has a “historic opportunity” to side with pro-democracy forces in order to give them an upper hand as part of an eventual political settlement with the Taliban.

He and Waltz are also not alone among Republicans in urging the Biden administration to take a stronger line against Afghanistan’s Taliban-controlled government as intelligence officials warn that al-Qaeda could gain ground in the country following the U.S. military’s withdrawal.

Sen. Joni Ernst (R-Iowa) led three colleagues on a Wednesday letter pressing for the Taliban’s formal designation as a foreign terrorist organization by the State Department, which Graham and Waltz have already endorsed. Senate Intelligence Vice Chair Marco Rubio (R-Fla.) introduced a bill Wednesday that would codify that designation.

“If you continue to put all your eggs in the Taliban basket, you’re on the losing side over time,” Graham said. “If you start helping different resistance groups, then you’ll actually have some leverage with the Taliban.”

Specifically, Waltz and Graham have called on the Biden administration to provide humanitarian assistance and satellite phones to the Panjshir opposition forces, among other support.

They have also worked closely with Ali Nazary, who only recently escaped Afghanistan but serves as Massoud’s official spokesperson. Nazary previously told POLITICO that some lobbying firms have already reached out to him seeking to offer their services. Nazary sent a Massoud-authored op-ed to The Washington Post last month in which he pleaded for assistance from the U.S., including weapons and ammunition.

As of Tuesday, Graham hadn’t heard from Saleh in over a week, and the opposition leader’s whereabouts remain unknown. But he said he has no reason to believe that Saleh is dead or has fled the country. Massoud, though, is still in Afghanistan, according to two people with direct knowledge of his whereabouts.

Waltz said the pair is effectively in hiding.

“Their goal right now needs to be to remain alive and to keep the resistance alive with them,” Waltz said in an interview.

Alexander Ward and Daniel Lippman contributed to this report.