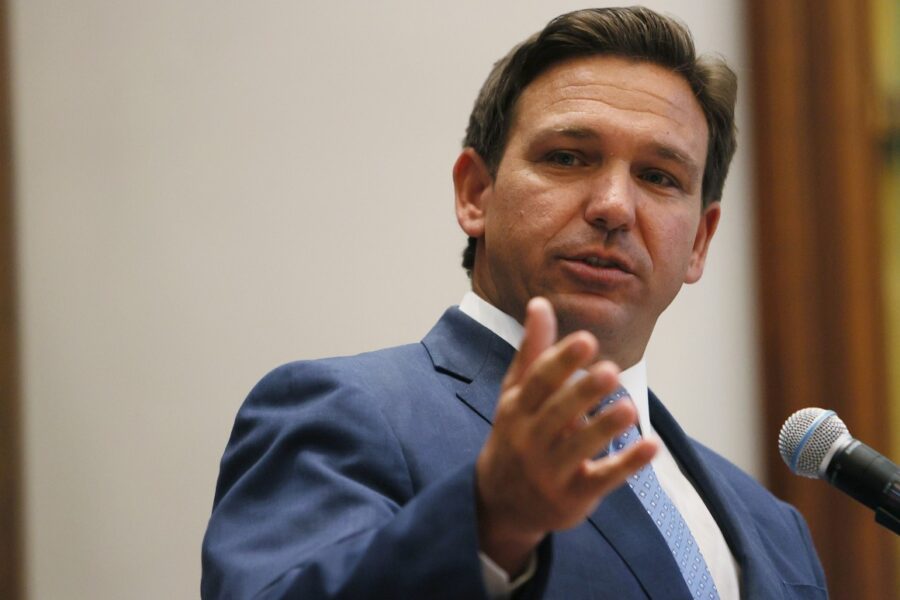 TALLAHASSEE — First came masks. Then a feud over vaccine mandates.

On Thursday, DeSantis ripped into Biden’s plan to distribute doses of monoclonal antibody treatments to states across the nation. Florida and six other Southern states have relied on the therapies to treat patients infected with the virus but also took up 70 percent of the orders in early September.

That lopsidedness prompted the Biden administration to start redistributing the more than 158,000 doses made available this week — and provoked DeSantis to attack the president for taking the therapies away from Floridians.

“We’ve been handed a major curveball here, with a really huge cut from HHS and the Biden administration,” DeSantis said at a press conference in Broward County. “We’re going to make sure we leave no stone unturned. Whoever needs a treatment, we’re going to work like hell to get them the treatment.”

He added that Florida is being punished for peddling the Covid-19 antibody treatment before the White House while the highly transmissible Delta variant began spreading in Southern states like Florida, Texas or Louisiana.

“I think we could have averted, in this country, a lot of people going to the hospital,” DeSantis said. “I think it would have saved a lot of lives.”

DeSantis has prioritized monoclonal treatments such as Regeneron in his Florida pandemic battle plan, spending the past several weeks flying across the state supporting the treatments. Monoclonal antibody treatments are considered effective if administered early in an infection. At the same time, he has opposed Covid-related restrictions such as requiring students to wear face coverings, vaccine passports or mandatory vaccine mandates for workers. That has put him repeatedly at odds with the Biden administration.

DeSantis’ opposition to Covid mandates has raised his profile, with conservatives across the nation cheering him on as he prepares to run for reelection and possibly challenge Biden in 2024. But the summer surge in Florida’s Delta variant cases pose a threat to DeSantis’ electoral ambitions, with the governor’s approval ratings dropping as the state broke grim Covid milestones such hospitalizations and new infections almost weekly.

White House press secretary Jen Psaki on Thursday defended Biden’s plan to cut Florida’s allotment of the antibody treatments, saying the administration is increasing the distribution of antibody treatments in September by 50 percent. But she also warned that the supply isn’t unlimited.

“Our role as the government overseeing the entire country is to be equitable in how we distribute,” she said during a press briefing. “We’re not going to give a greater percentage to Florida over Oklahoma.”

Federal records show that Florida is due to receive 27,850 does of Regeneron this week, which is still the most in the country. It’s down from the state’s weekly average of 72,000, according to DeSantis’ office. Florida and the six other states that were receiving 70 percent of the federal supply are now receiving more than 55 percent, while the rest are shared among the other states, districts and territories including Oklahoma, which will receive 2,840 doses.

But Biden’s plan didn’t sit well with Florida’s Republicans beyond DeSantis. GOP Sen. Marco Rubio on Thursday took to Twitter to condemn the White House, posting that the redistribution of antibody treatments “reeks of partisan payback against states like Florida.”

More than 49,000 people in Florida have died from Covid-19 since the pandemic first hit the state in March 2020. The Delta surge over the summer led to more than 9,600 deaths in August, and more than 818,000 new infections, according to weekly reports from the state Department of Health.

DeSantis spokesperson Christina Pushaw told POLITICO that Florida health officials told the U.S. Department of Health and Human Services on Monday that the state would need at least 36,000 doses of the antibody cocktails for the state’s 25 treatment sites, not counting locations where it’s offered privately statewide. In an email sent by HHS on Tuesday, which Pushaw provided a copy, federal officials told the state to expect about 30,000 doses.

Notably, DeSantis on Thursday said Florida is seeing a drop in new cases, and demand at the 25 therapy sites has waned. But the state historically has seen another spike around the holiday season.

“We’re going to work like hell to make sure we can overcome the obstacles that HHS and the Biden administration are putting in,” DeSantis said.