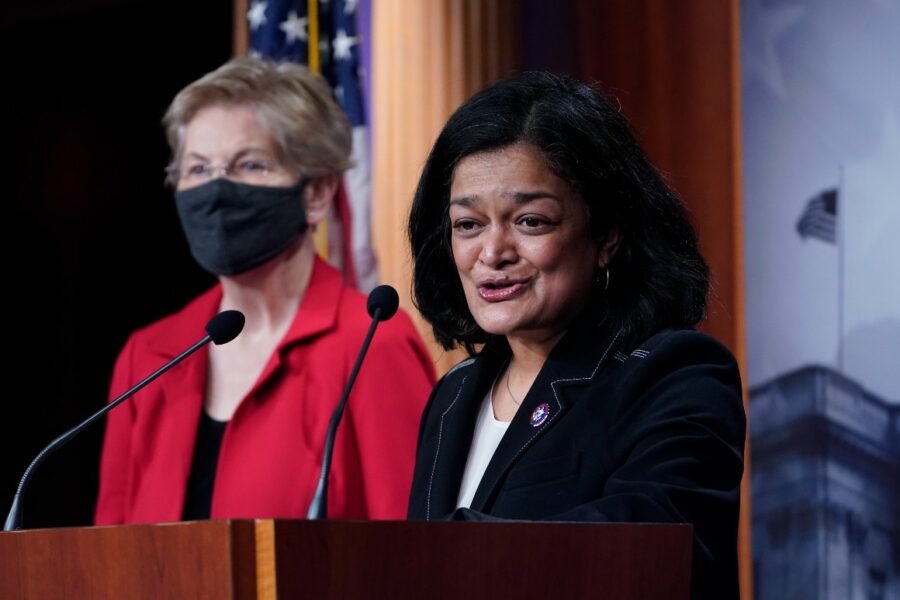 Progressives have waited months for their turn to exert control over the Democratic agenda. Now it’s here, and liberal leaders are weighing just how far to go.

Speaker Nancy Pelosi’s left flank is quietly mulling whether to mobilize its roughly 100-member bloc to tank the centrist-crafted Senate infrastructure bill when it reaches the House floor within a week — unless they’re assured that a mammoth Democrats-only social spending bill will also make it to President Joe Biden’s desk.

Progressive leaders see the coming House infrastructure vote as perhaps their most influential moment so far in Biden’s Washington. They were largely sidelined when Pelosi negotiated her way out of a standoff with centrist Democrats last month, and many are eager to demonstrate that the power of an emboldened left can match that of moderates who’ve repeatedly flexed on leadership over the multitrillion-dollar party-line spending plan.

“Even if there were Republicans that come along” to help the Senate infrastructure bill pass the House this month, said Congressional Progressive Caucus Chair Pramila Jayapal (D-Wash.), “we will have more individuals, more Democrats who are going to vote it down without the reconciliation bill.”

Jayapal said more than half of her 96-member caucus has privately indicated they’re willing to block the bipartisan Senate bill without their party-line bill in tow — far more than the roughly two dozen liberals who have gone public with their threat.

“I feel very confident in our numbers, and it is far beyond 20,” the Washington Democrat said.

The House returns Monday for a pivotal two-week session that’s set to include a long-awaited vote on that Senate infrastructure deal. The plan, agreed to by Pelosi and moderates, is to vote on the bill by Sept. 27, in tandem with an up-to-$3.5 trillion package that funds dozens of liberal aims, from universal pre-K to Medicare expansion.

But as an intraparty tussle threatens that ambitious timeline, the party-line bill may not be ready by late September. And progressives fear Pelosi’s truce with centrists could leave their members with vanishingly few of their priorities.

Behind the scenes, progressive members have begun discussing how to wield their influence under the worst-case scenario: passage of the Senate infrastructure bill this month, with little progress on the party’s vast $3.5 trillion social spending plan. Still, even as several liberals vow to oppose the infrastructure bill, many senior Democrats contend it will be much tougher to make good on that threat when it actually comes to the floor.

If enough liberals are willing to hold up that legislation as leverage, some believe it would force moderates’ hands on the party’s much broader social spending package, which is funded in part by tax increases on the wealthy and corporations.

Many Democrats, though, are skeptical about defeating a major Biden priority — even temporarily.

“I’m not worried about the bill,” said House Majority Whip Jim Clyburn, a close Biden ally. But the South Carolinian also wouldn’t say whether leadership would try to delay the infrastructure vote if the party-line bill isn’t ready, an outcome many Democrats fear given how tense the private negotiations are with the Senate.

Moderates in the House, including several of the 10 who pushed for the late-September infrastructure vote, insist they can overcome the left’s opposition as long as they get GOP help. Centrist Democrats also privately doubt that enough liberals will be willing to tarnish Biden’s agenda by blocking the bill.

The moderate group reiterated Pelosi’s commitment to a Sept. 27 vote in a lengthy statement Friday evening.

“We want to thank the leadership for their continued, strong commitment — codified in the rule and voted for by every Democratic member … — to holding a vote on the historic bipartisan infrastructure bill by that date,” the group, led by Rep. Josh Gottheimer (D-N.J.), wrote.

But Jayapal said her caucus is sticking with its same demand from this summer, that the dueling bills must move together. The group’s leaders surveyed their members again this month after asking in July, and the result was a widespread willingness to block the bipartisan deal.

Rep. Ilhan Omar (D-Minn.), the group’s chief vote-counter, said in a statement that Biden, Pelosi, Senate Majority Leader Chuck Schumer and the Progressive Caucus “all agree that these bills are two parts of a whole and will be passed together. That has not changed.”

The looming standoff is a key test for Jayapal, who consolidated power within the CPC last fall by becoming its sole leader and instituted a bevy of changes designed to make the group more influential by ensuring it votes as a bloc on key issues.

So far, the caucus has had few public showdowns with House leadership this Congress other than a short-lived dispute over the Capitol Police budget in a security funding bill last spring.

A senior Democratic aide indicated that leaders are aware of the progressives’ demands: “There is serious concern among Leadership that there aren’t the votes to pass the infrastructure bill unless reconciliation moves at the same time, which can’t happen unless the Senate moves more expeditiously on pre-conferencing” the massive party-line bill, the aide said, speaking candidly on condition of anonymity.

Instead of publicly battling with their leaders, Jayapal and other senior progressives have leaned hard into their list of policy demands — from climate action to immigration overhauls — and helped those ideas win support across the broader caucus. Central elements of their plan are expected to make it into the Democrats’ final proposal.

Liberals aren’t digging in on the infrastructure vote timing to “make a statement” about their power, Jayapal insisted. “It’s about really being able to say to the American people, we are absolutely 300 percent committed to delivering on what we promised you. They want to see us fight for them.”

Part of progressives’ challenge is the breadth of their caucus in the House; it includes enthusiastic Biden backers, swing-district Democrats and even some members of the centrist Problem Solvers Caucus. And while the group is far bigger than its centrist counterparts, liberals are typically less willing to declare war on party leaders.

Across the Capitol, Senate liberals are openly rooting for Pelosi to find a way to stand firm, despite her deal with the moderate Democrats. They hope she can delay the infrastructure vote, allow her progressives to tank it or even finish the huge party-line bill in the next week — an all-but-impossible outcome.

“I am hopeful that we’ll hold the line. The deal always was, both pieces would go forward together,” said Sen. Elizabeth Warren (D-Mass.). “Everyone has the date ‘Sept. 27’ circled on their calendar.”

All 50 Senate Democrats supported the infrastructure bill, with the understanding that the party’s wings would be moving together. Many disliked the bipartisan bill, worried it didn’t spend enough to make a real difference and lukewarm on its shaky financing.

Yet liberals realized they couldn’t get moderates like Sens. Kyrsten Sinema (D-Ariz.) and Joe Manchin (D-W.Va.) to go along with the sweeping spending bill without also blessing Sinema and Manchin’s bipartisan bill. To many progressives, separating the party’s two-track plan to muscle both proposals into law would be a violation of trust and risks substantive losses.

“If that goes forward, many, many important issues that are going to be addressed in reconciliation are unlikely to get done,” said Sen. Jeff Merkley (D-Ore.), ticking off climate, housing and education investments. “There’s so many important things that would be at risk of failing if we don’t keep these two bills connected.”

The calculation is different for less liberal Democrats. Those lawmakers would rather see the bipartisan bill sent to the president’s desk regardless of the social spending plan’s status in order to bolster Biden as well as their candidates in tight Senate and House races. Democrats have now gone six months since the passage of $1.9 trillion in coronavirus relief without finalizing any more of the president’s priorities.

Asked about the infrastructure bill, Sen. Mark Kelly (D-Ariz.) — who faces a tough race next year — said he’d like to see the House “pass it now.”