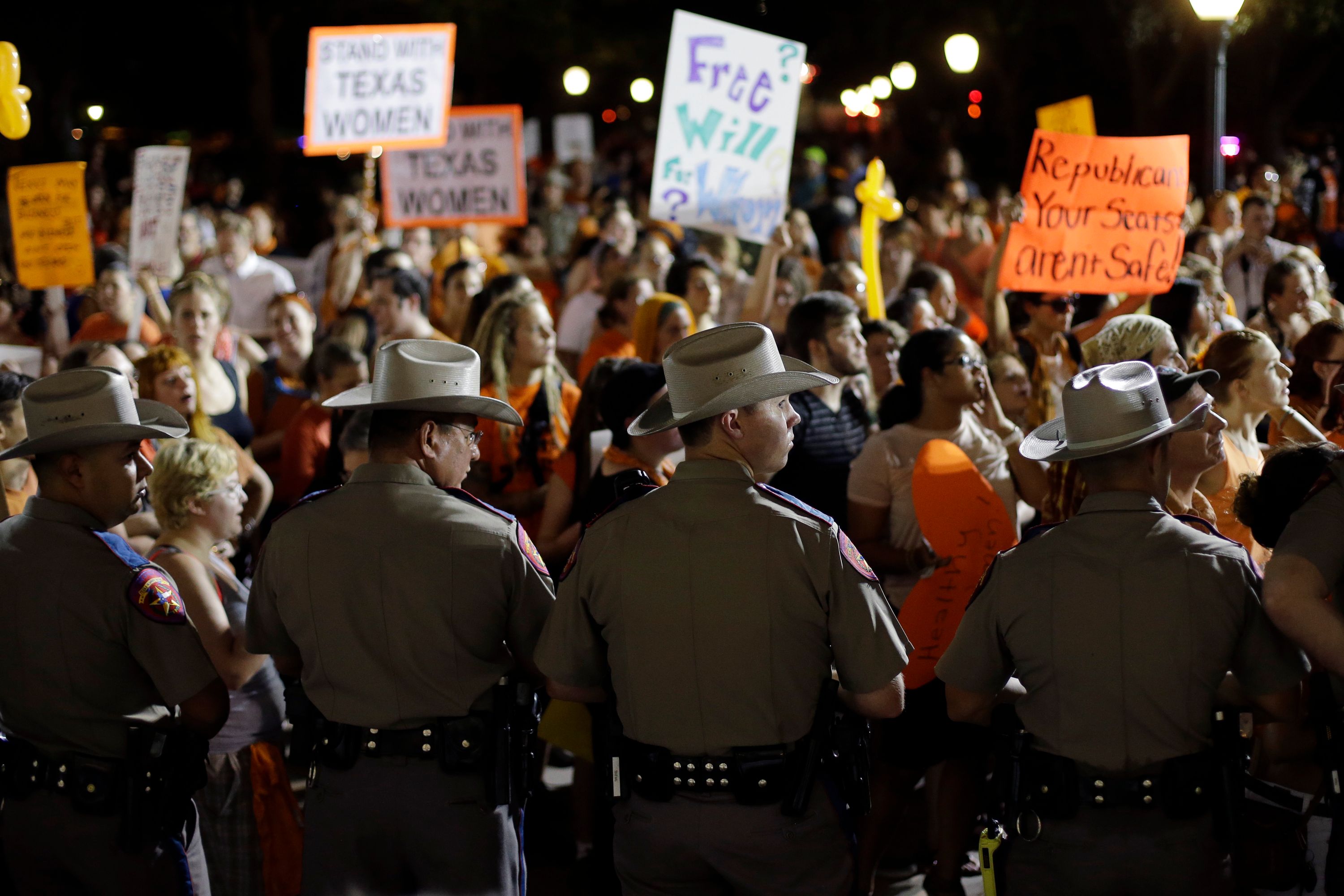 When the Supreme Court allowed Texas’ 6-week abortion law to stand earlier this month, it was presented as a major victory for anti-abortion conservatives. After all, Republican state legislators in deep red states have long been passing increasingly restrictive abortion laws, only to see many later get struck down in the courts. Finally, one law got through (at least for now).

But if it’s the victory conservatives were hoping for, why aren’t high-profile Republicans celebrating it? Senate Republican leader Mitch Mconnell — never one to shy away from a political fight — had only this to say about the Supreme Court’s ruling: “I think it was a highly technical decision.” Ronna McDaniel, chairwoman of the Republican National Committee who oversees the platform for the party, was out within hours declaring that she would challenge the legality of President Joe Biden’s vaccine mandate, yet has been totally silent on the Texas abortion case — as well as the Biden Justice Department’s decision to challenge the law. Even most of Texas’ congressional delegation remained silent on the new abortion legislation.

What’s going on? When considering the political ramifications of the Texas abortion law, Ian Malcom’s famous line from Jurassic Park comes to mind, with a little social-wars twist: “Your [anti-abortion advocates] were so preoccupied with whether or not they could that they didn’t stop to think if they should.”

For decades, Republican state lawmakers have been able to vote for and pass highly restrictive abortion laws without living through the political consequences, because the laws were typically enjoined by the courts before they ever took effect. The politicians got to check the pro-life box important to a segment of their voters without their constituents ever living under those strict laws. This kept the political backlash to their votes to a minimum.

This month, the Supreme Court called these legislators’ bluff by letting the Texas abortion law stand. Now the most restrictive abortion law in the country is under the political microscope and Republicans in Washington are being uncharacteristically quiet — at least in part because they sense that this law will do more to motivate the opposition than it will to rally the faithful.

Already, the Democrats can’t stop talking about it. After a brutal August that mired the Biden White House in one bad news cycle after another, the Supreme Court’s decision on Texas was like rain breaking a long drought for Democratic operatives. The issue allowed Democrats to unite their warring factions on the Hill, moved the news cycle off wall-to-wall coverage of Biden’s botched Afghanistan withdrawal, and raised money for Democratic candidates.

If larger historical trends hold, Republicans would be favored to win back the House in 2022, but the question now is whether anti-abortion advocates just handed a beleaguered White House the key to energizing their pro-abortion rights voters and potentially staving off a GOP landslide. By finding a legal loophole that allowed the Texas law to go into effect, did they win the battle but lose the war?

In answering that question, first, we shouldn’t pay too much attention to abortion issue polls. As a general matter, issue polling is deeply flawed in that it asks people to summarize their often complex and contradictory views into answers like “agree” and “strongly agree.” And unlike campaign polling — plagued by its own inadequacies — the results are never verified by an actual election.

Moreover, abortion is uniquely poorly polled. Whether someone identifies as “pro-life” or “pro-choice” — which are highly correlated with partisanship — isn’t helpful when debating, for example, whether a woman should be required to have an ultrasound before aborting a pregnancy. Asking respondents whether Roe should be overturned is only useful if the pollster is actually trying to determine whether voters think abortion restrictions should be decided by federal courts or state legislatures. “Do you believe that abortion should be legal in all or most cases” gives us no information on the voter who believes that abortion at eight months should be prohibited and at six weeks should be legal.

So the more relevant question is whether the abortion issue motivates voters in both political camps and which side it motivates more.

There’s some research to show that abortion doesn’t motivate Republican voters all that much. As Ryan Burge, an assistant professor of political science at Eastern Illinois University, found based on data from 2018, “large numbers of white evangelicals don’t place a great deal of importance on abortion … and other issues like immigration and issues of race may be even more effective at turning out the base in the future.”

The problem with that data, however, is that it was gathered before the confirmation of Justices Brett Kavanaugh and Amy Coney Barrett, in an era when the court was striking down most abortion restrictions. Not surprisingly, then, those researchers also found that the same voters believed it was very unlikely that the two SCOTUS precedents upholding a constitutional right to an abortion, Roe and Casey, would ever get overturned. In other words, it’s possible that voters stopped caring about abortion because they knew they couldn’t get far on the issue. This could mean that if the new 6-3 Court actually does move the ball down the field — so to speak — later this year, these voters would be much more motivated to vote on their anti-abortion beliefs.

Meanwhile, abortion is showing signs of being a motivating issue for Democrats, who are fighting to keep control of the House and Senate in 2022. According to a Morning Consult poll from last week, the share of Democratic women who say that “issues such as abortion, contraception and equal pay, are their top voting concerns” has risen from 8 percent to 14 percent since the Texas law went into effect. That may sound small, but if midterm elections are largely about motivating your own voters, then having an issue that can move turnout by a few percentage points is often the difference between winning and losing a top tier race.

So, both sides have reason to believe this issue can motivate their base under the right circumstances. But only the Democrats have the motivator of fear — both in the form of an obviously unconstitutional law that is currently being used to stop abortions in a state that they once again hope to flip in 2022 and the now much more realistic threat of similar laws passing in states with open Senate seats — like Pennsylvania and North Carolina.

The second point to consider is that the abortion debate will only gain steam next year, an election year. Because of the bizarre legal quirks of the Texas law, it will continue to wind its way through the courts for months and pop up in the news from time to time. But the true national abortion fight will come when the Supreme Court issues an opinion about Mississippi’s 15-week abortion ban, mostly likely in next June — just four and a half months before the 2022 election. (SCOTUS will hear the case later this year.) This — not the Texas case — represents the real challenge to Roe and Casey.

If the Supreme Court holds that there is no longer a constitutional right to obtain an abortion or holds that such a right only exists until roughly the end of the first trimester, individual states would be able to pass laws restricting abortion access or Congress would be able to pass a law recodifying a federal right to abortion access. This could make every state legislative race and congressional election a referendum on abortion legislation in a way that the country has never experienced. And the unpredictability of the outcome of such a large-scale fight should worry both sides.

One dividing line is whether the goal of the anti-abortion movement should be to ban abortion or end abortion. The ban abortion crowd wants to pass laws that prohibit abortions. The end abortions folks, however, want to use whatever means are effective to reduce the number of abortions in the country. They are quick to point out that there are fewer abortions today than in 1973, when abortions were banned in large swaths of the country, proving that laws banning abortion will never end the practice by themselves. There are plenty of people in this crowd who think the Texas law’s reliance on “abortion bounty hunters,” as some people are calling them, to report abortions is a gross, counterproductive idea that will do more to turn people away from the movement than win hearts and minds to the cause.

Another fracture within the movement is reflected in almost every political fight — the incrementalists vs. the absolutists. The Texas law mandating a 6-week abortion ban and punishing those who aid and abet anyone who gets an abortion after that period is an absolutist one. The absolutists knew it was unconstitutional under current Supreme Court precedent and will likely be overturned, but they think it will have been worth the effort as long as it can save a few lives for the few weeks it is actually in effect. The incrementalists, on the other hand, wrote the law in Mississippi — a 15-week ban on abortion that relies on the consensus in Western European countries, which almost all restrict abortions after the first trimester. Most legal scholars believe this law could be the vehicle the conservative court uses to narrow or overturn Roe and Casey. These more incrementalist anti-abortion advocates still want to end abortions in the U.S. but they are willing to play a game of inches to get the ball into the end zone rather than throw a pass that has a high likelihood of getting intercepted by Chief Justice Roberts.

The result is that the anti-abortion movement is divided against itself. Proponents of the Texas law are claiming vindication, but the “end abortion” crowd is questioning its efficacy. The incrementalists are arguing that it’s counterproductive, and legal conservatives are pointing out that the same concept could now be used by liberals to create bounties on other constitutional rights like gun ownership and religious exercise. This leaves sizeable portions of the GOP’s base divided against themselves heading into a midterm that will require thousands of grassroots staff and volunteers across the country to all row in the same direction.

The Supreme Court in Roe purported to settle the abortion issue nearly 50 years ago, but instead the justices only moved the fight from the ballot box to the courts themselves. As one federal judge put it this month, “wrenching responsibility from the hands of state legislatures and giving it to judges has resulted in acrimony and results-oriented decisions.” Not coincidentally, judicial confirmation fights have only gotten more contentious since Roe, as the elected branches increasingly bring the courts into their political battles. In the first half of 2021, state legislatures passed more anti-abortion regulations than in any year since the Roe was decided in 1973 — all of which will be litigated in the courts.

If the Supreme Court gets out of the abortion business in the lead up to the 2022 elections, it will be up to voters and legislators to decide the issue for themselves. Midterm elections historically favor the party out of power, but Republicans may have just handed Democrats the issue they needed to motivate the Democratic voters that often stay home between presidential elections.