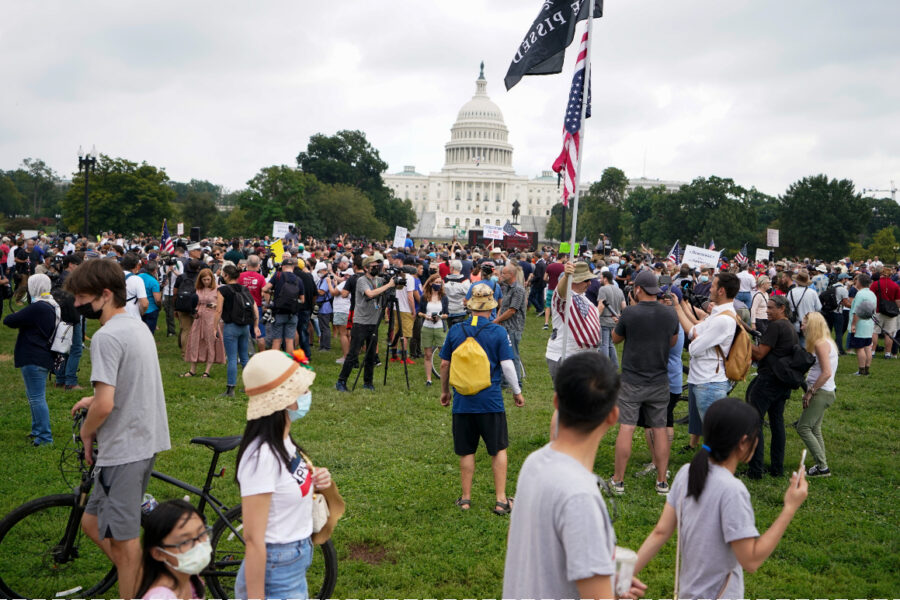 A highly anticipated rally on behalf of the more than 600 people charged in the Jan. 6 Capitol Hill riot drew a modest crowd of a couple hundred demonstrators Saturday, with media and security personnel far outnumbering those seeking to air grievances on behalf of defendants they call “political prisoners.”

The small crowd that gathered just steps from where the worst violence unfolded earlier this year was met by a massive law enforcement presence clad in riot gear. Horse and bicycle-mounted police officers circled the gathering, and a Metropolitan Police Department helicopter flew overhead. Both Capitol Police Chief Thomas Manger and MPD Chief Robert Contee III attended the event, standing alongside their officers.

The rally, organized by a former campaign aide to former President Donald Trump, began just after noon and lasted only about an hour. It featured a handful of speakers who addressed the group from a small stage.

Capitol Police reported a total of four arrests, including a man in the crowd with a knife and another who was carrying a gun. Two other people were arrested following a traffic stop near the Capitol. Police said they had pending arrest warrants from Texas, one for firearm possession and another for a probation violations.

But the event was relatively subdued, with minimal presence from counter-protesters. The clashes feared by law enforcement never materialized despite scattered shouting matches that immediately drew swarms of cameras. A few of the rally attendees donned the insignia of Three Percenters, a loosely affiliated militia group, several of whom were arrested for actions on Jan. 6.

While the Capitol riot defendants have garnered some sympathy on the right, most Republicans shied away from the rally and its rhetoric. Trump expressed support for the defendants but called the rally a “setup” Thursday. No sitting members of Congress attended, as the rally provoked a now-familiar sense of anxiety on the Hill.

Law enforcement dramatically escalated security at the Capitol in the days before the rally, erecting fencing and surveillance around the Capitol, increasing numbers of officers patrolling its grounds and calling in the National Guard to stand by. Mobile surveillance equipment dotted Capitol grounds, and Manger urged the public to prepare for road closures in the area.

Some organizers acknowledged the turnout was disappointing, attributing the small showing to intense advance warnings from officials and the media.

“Take a look around. Do you see an insurrection?” said Cara Castronuova, a professional boxer and trainer who leads a group defending Jan. 6 arrestees. “Shame on the people the system that put fear in the hearts of American citizens to stay home, and to not come out. … What kind of America has this become where people are afraid to come out and protest?” 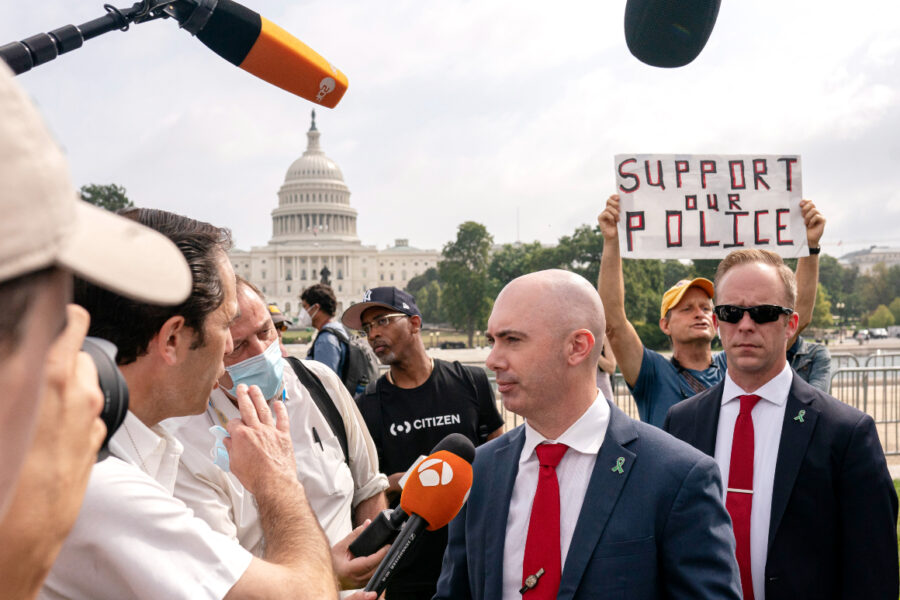 At the outset of the rally, Look Ahead America founder Matt Braynard insisted the event was not aimed at supporting those who were violent or damaged property at the Capitol on Jan. 6, but the messages delivered by others clearly embraced people who are accused of attacking police.

“Anybody who engaged in that kind of violence or property destruction that day deserves to be tried with a speedy trial and locked up for a long time,” Braynard said.

However, some given platforms at the event did advocate for Jan. 6 participants accused of violence. One speaker at the rally — who identified herself as the girlfriend of Capitol riot defendant Jonathan Mellis — railed against the conditions in the D.C. Jail where a small fraction of the Jan. 6 detainees are being held.

Mellis, of Williamsburg, Va., is accused of using a stick to beat police during the riot. The FBI says he made stabbing movements with it and seemed to be trying to spear officers between their helmets and their body armor.

“Jon’s in solitary confinement,” said the woman, who declared that he and others had been subject to “torture.”

The woman, who was identified only as Kelly, went on to complain that for dinner last night Mellis was served only white bread, a cookie and a packet of tartar sauce.

“I think America needs to become very well-versed in the treatment of these men. It’s human rights that we’re talking about and it is completely non-partisan,” she said.

Some opponents of solitary confinement, including some Democratic lawmakers, have criticized the conditions for Jan. 6 defendants at the D.C. jail. Officials there say the restrictions are aimed at preventing the spread of the coronavirus among inmates and the conditions have been relaxed in recent months to give prisoners a couple of hours a day outside their cells.

Nearly all of the several dozen people in pretrial custody stemming from the Jan. 6 riot are charged either with assaulting police or with being parts of conspiracies aimed at blocking the certification of electoral votes. Pretrial detention for alleged rioters charged only with misdemeanors has been extraordinarily rare. One man was held for about six months on such charges, but he had previously served time in prison for attempted murder.

At the rally, Braynard highlighted the case of one man not accused of violence who has been held since soon after the riot, Jacob Chansley. The self-described QAnon “shaman” pleaded guilty to an obstruction charge last month and remains jailed pending sentencing.

“If you want a name, Political prisoner #1 is Jake Angeli,” Braynard said in an email to POLITICO before the rally, referring to another name used by Chansley.

In addition to charging more than 600 people in connection with the attack, prosecutors are quickly resolving dozens of the simplest cases — more than 80 alleged rioters have already pleaded guilty or are preparing to for partaking in the mob scene, a number that has steadily risen in recent days. Still, the Justice Department is grappling with how to bring many of the most complex cases to trial — particularly those involving militias such as the Oath Keepers and Proud Boys, several of whose leaders are in D.C. jail while their charges are pending.

About 60 to 70 other Jan. 6 defendants are detained while awaiting trial. They include Proud Boys leaders Ethan Nordean and Joseph Biggs, Oath Keepers Jessica Watkins and Kelly Meggs, and Timothy Hale-Cusanelli, who expressed overt antisemitism to colleagues at the naval weapons base where he worked prior to his arrest.

Although some judges are expressing concern at the length of pretrial incarceration for some of these defendants, they’ve largely deferred to the Justice Department, which has described the investigation as the largest and most complex in history.