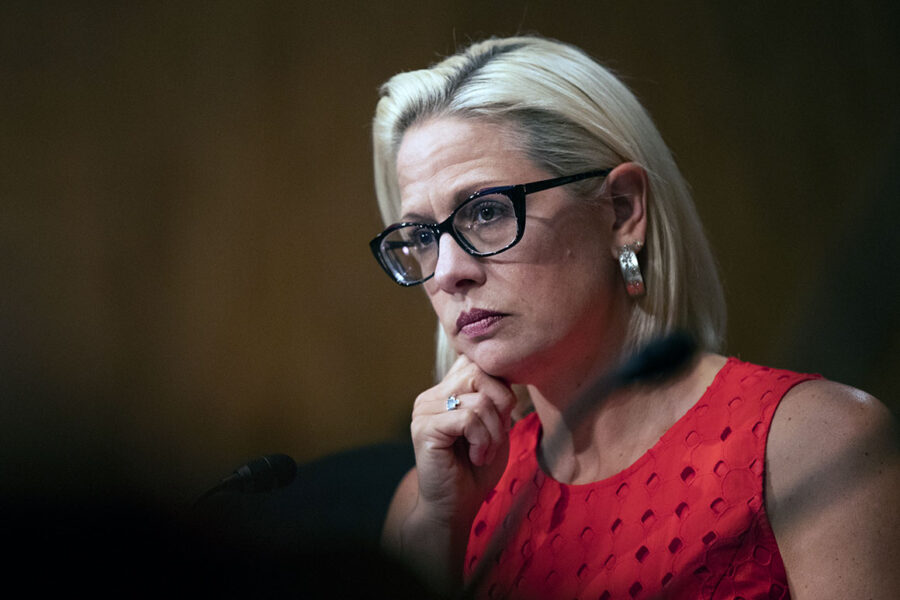 The White House has a new headache as it struggles to get its multitrillion-dollar party-line spending bill passed: Sen. Kyrsten Sinema’s objections to drug pricing reforms that are already struggling to make it through the House.

The Arizona Democrat is opposed to the current prescription drug pricing proposals in both the House and Senate bills, two sources familiar with her thinking said. They added that, at this point, she also doesn’t support a pared-back alternative being pitched by House Democratic centrists that would limit the drugs subject to Medicare negotiation.

Sinema met with President Joe Biden on Sept. 15 to discuss the social spending package, in which party leaders hope to include the Medicare prescription drug pricing proposal. Sinema has made her resistance to the current House prescription drug negotiation proposal clear to the White House, according to one of the sources, but it’s unclear if she’s completely immovable.

Both she and Sen. Joe Manchin (D-W.Va.), who met with the president the same day, delivered what one source described as a sobering message for the White House about the fate of the reconciliation bill and its $3.5 trillion price tag, which they both say is too high. The social spending plan is designed to pass without GOP votes through budget reconciliation, meaning that Biden will need to win all 50 Senate Democratic votes to secure its passage.

“As she committed, Kyrsten is working directly in good faith with her colleagues and President Biden on the proposed budget reconciliation package,” said John LaBombard, a Sinema spokesperson, who declined to discuss the prescription drug measure. “Given the size and scope of the proposal, while those discussions are ongoing we are not offering detailed comment on any one proposed piece of the package.”

Sinema’s concerns about the prescription drug component combined with Manchin’s more publicly stated opposition to the current reconciliation bill cast significant doubt on Biden’s ability to get the votes to pass his signature domestic initiative.

Biden and Manchin left their Wednesday meeting in a stalemate, according to two sources briefed on the conversation. The West Virginia Democrat said he couldn’t support a $3.5 trillion package, a detail first reported by Axios. But the disagreements between the two went beyond that. When discussing the size of the bill, Biden cited the need to win progressive votes as well, implying that any significant modifications could cost him support on the left.

Manchin also pressed Biden about moving the Senate-passed bipartisan infrastructure bill first as they figured out an agreement on the reconciliation package, according to the two sources. Biden said it was a no-go, telling Manchin the infrastructure bill couldn’t advance further without some commitment from Manchin to move forward on reconciliation. Manchin didn’t offer that commitment, the two sources said, describing the back-and-forth as respectful but direct.

Sam Runyon, a spokesperson for Manchin said, “Senator Manchin does not disclose the details of his private meetings.”

Though both Manchin and Sinema have made clear, publicly and privately, that they are willing to negotiate on the party-line social spending proposal, their opposition to the current version has irritated fellow Democrats who see a unique opportunity to muscle through major domestic legislation. The reconciliation bill would boost child care, paid family leave and expand Medicare while spending potentially historic sums to combat climate change.

“The last two miles of the marathon are always the toughest, but there remains strong conviction and unity to finish this thing and do something historic,” said John Podesta, former counselor to President Barack Obama and one of the most prominent advocates for aggressive climate action through the reconciliation bill. “I think the real question is how big, not whether.”

The drug price negotiation changes that Sinema is coming out against are a major component of the bill’s envisioned financing. Democrats are counting on them to raise as much as $700 billion over 10 years to pay for the party-line bill’s ambitious programs. Axing it could imperil the health care reform components in the social spending plan, such as a proposal from Sen. Bernie Sanders (I-Vt.), and supported by Biden, that would expand Medicare coverage to hearing, dental and vision.

The prescription-drug pricing measure is also one of the biggest elements championed by the White House. In speeches this summer, Biden highlighted the proposal as popular across the electorate.

“The President, his Cabinet, and White House senior staff are continuously engaged in discussions with a wide spectrum of members about the Build Back Better agenda,” said Andrew Bates, a White House spokesperson. “And good progress is being made. We urgently need to cut taxes for working families and reduce the cost of prescription drugs, education, health care, child care, and care for older Americans; and pay for it by restoring fairness to our tax code.”

Sinema ranks as one of Congress’ leading recipients of pharmaceutical industry donations, according to an analysis by Kaiser Health News. The Arizona Senator is not the only Democrat expressing concerns with the party’s approach to drug negotiation. A trio of centrist House lawmakers voted against the measure in the Energy and Commerce Committee this week and a fourth voted against it in the Ways and Means Committee.

Rep. Kathleen Rice (D-N.Y.) was one of those centrists. In a letter sent to the Alliance for Retired Americans advocacy group two days after the vote, the congresswoman said she supported “the goals” of the Democratic bill to allow Medicare to negotiate lower drug prices. Unlike her past votes in favor of it, however, Rice wrote, her committee vote was not on a “clean, stand-alone bill.”

“Instead, the H.R. 3 drug pricing language was being used as a tool to offset the cost of a $3.5 trillion reconciliation bill,” Rice wrote in the letter, obtained by POLITICO. “That bill has no chance to become a law, as Democrats in the Senate have stated that a bill with such a price tag will not have the votes to pass in their chamber.”

Rice’s office did not respond to a request for comment.

Democratic leadership is under a tight, self-imposed deadline to resolve these differences. House leaders have promised to hold a vote on the Senate infrastructure bill by Sept. 27, which is designed to happen in tandem with the reconciliation package. But with progressives threatening to withhold their votes if the party-line package remains uncertain, it’s unclear if the infrastructure bill can pass. Centrists in the House and Senate expect the total $3.5 trillion price tag for the package to shrink. They’re also unhappy with the pace set by the White House and Democratic leaders.

“The way we’re moving this along so quickly puts the House in a position where individual members of the House really won’t be involved in making the choices about what we fund,” said Rep. Scott Peters (D-Calif.), one of the four House Democrats to vote against the prescription drug pricing measure considered in two committees this week. “The bipartisan bill took five and a half months; we’re trying to do a bigger bill — a 3 1/2 trillion-dollar bill — in five weeks.”

Peters argued his proposal was better suited to win widespread support. It would limit the number of drugs that Medicare would be able to negotiate over, provide a $50 monthly cap on insulin costs, and generate lower out-of-pocket costs for seniors most in need. But progressives have lambasted the centrists for seeking major changes to a critical pillar of the package, saying it is both less ambitious and threatens all of the other health care reforms.

“There should be some accountability mechanisms here against people who step out of line at this juncture on such a core issue that nets 80 to 90 percent approval in a lot of these districts,” said Faiz Shakir, a political adviser to Sanders. “All three of these candidates should get primary challenges.”

Marianne LeVine and Natasha Korecki contributed to this report.