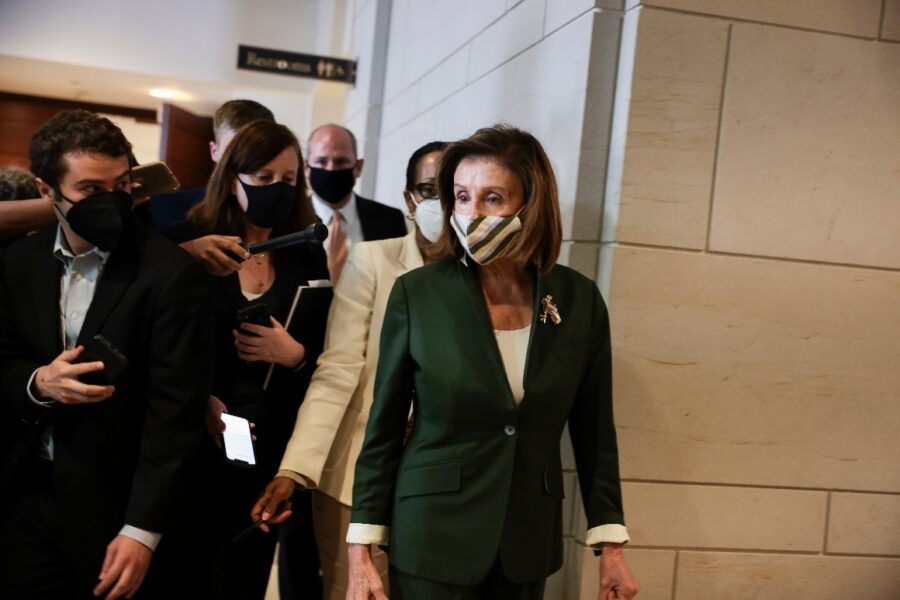 Democratic leaders mapped out a plan on Monday to tackle a pair of ominous fiscal deadlines over the coming weeks. Now their members are waiting to see how they’ll pull it off.

House Speaker Nancy Pelosi and Senate Majority Leader Chuck Schumer announced plans Monday afternoon to link a short-term government funding bill with another measure to suspend the nation’s debt limit through the 2022 midterm elections. But even with the House slated to vote on the high-stakes package this week — just days before government funding expires and as the clock ticks on a potential U.S. debt crisis — lawmakers were still awaiting key details of the strategy by Monday evening.

Perhaps the biggest question mark is whether Pelosi and Schumer can force GOP leaders to blink in the Hill’s fiscal standoff, with Republicans refusing to negotiate on the politically toxic issue of the nation’s multitrillion-dollar debt default when the Democrats are in power.

“I am worried because I know [Senate Minority Leader] Mitch McConnell makes these pronouncements and has a tendency to ignore the consequence,” said Senate Majority Whip Dick Durbin.

Defaulting on the nation’s debt “can’t happen,” the Illinois Democrat added. “We have a recovering economy that’s showing signs of strength, and it would be a reckless strategy.”

But Sen. Richard Shelby of Alabama, the upper chamber’s top GOP appropriator, said there’s still time to tackle a shutdown and the approaching debt cliff — the latter of which Democrats should tackle on their own.

“Sooner or later, we’ll meet our obligations,” he said. “We always have, we always will. But the Democrats are in control and they can do it themselves.”

A number of Senate Republicans pledged to oppose a procedural vote on the legislative bundle that would package a stopgap spending bill, disaster aid and a debt limit suspension, in addition to final passage.

Pelosi and her leadership team had been expected to release the stopgap legislation as soon as Monday, but senior lawmakers and aides were still racing to finalize the measure by that evening. The delay, while temporary, further fueled anxiety among many Democratic lawmakers and aides who were already concerned about the crush of September deadlines facing their party.

With senior Democrats still deep in discussions over key details — including how long it would keep the lights on at the federal government, the timeline for the bill slipped by at least one day. The House Rules Committee, which was expected to tee up the spending and debt bill on Monday, halted its work later that afternoon, with one senior aide saying it was unlikely the panel would meet again until Tuesday morning.

As of Monday night, lawmakers were still haggling over emergency funding to help Afghan refugees settle in the U.S., Shelby said. Leaders have yet to lay out the specifics of billions of dollars in disaster aid as well, even to Republican lawmakers from storm-struck states who are likely to vote in support of the package.

“It’s like a big jigsaw with a lot of pieces and no picture to guide you,” Sen. John Neely Kennedy (R-La.) said Monday night.

The Democrats’ plan grew more complicated Monday, as McConnell only hardened his position that his GOP conference would not assist Democrats in addressing the debt limit when their party controls Congress and the White House.

Republicans will “support a clean, continuing resolution“ that includes disaster aid and refugee resettlement funding, but not legislation to raise the debt limit, McConnell said on the floor Monday afternoon.

But just hours earlier, Democratic leaders had insisted they were sticking with their hardball tactics to pressure the GOP and remained unwilling to publicly discuss possible alternatives to tackle the debt limit without Republicans.

“A reckless Republican-forced default could plunge the country into a recession,” Pelosi and Schumer wrote in a joint statement Monday. “We look forward to passing this crucial legislation with bipartisan support through both chambers and sending [it] to the president’s desk in the coming weeks.”

Still, Democratic leaders are engaging in private conversations about exactly how to get out of the mess, as the House returns Monday for the first time since mid-August. Congress has just 10 days until federal funding expires, and a few weeks until they’ll be forced to take action on the debt limit.

Democrats plan to vote on a stopgap spending bill through December, including billions of dollars in relief for hurricane-battered red states across the southeast and funding to help Afghan allies and partners. Some Republicans have said they’re willing to back a continuing resolution with extra aid — as long as Democrats drop their debt limit dare, which would mean ceding a major point of leverage.

Republican leaders have insisted for months that Democrats control Congress and the White House, and therefore have the power to stave off a debt default on their own. But with such slim majorities in the House and Senate, many centrist Democrats aren’t comfortable with owning an upfront increase in how much money the government can borrow — likely the only action allowed by the special budget maneuver that the party is using to pass President Joe Biden’s social spending bill.

Democrats and the White House have indicated that they prefer a bipartisan debt limit suspension, which is akin to hitting pause on the critical issue. Both parties have been more apt to back a suspension in recent years, most recently in August 2019, when the Trump administration, Pelosi and then-Senate Majority Leader Mitch McConnell agreed to waive the debt ceiling for two years.

Treasury Secretary Janet Yellen has warned that her agency could run out of money as soon as next month, while other experts have estimated that Congress has until mid-November to act. Failing to raise the debt ceiling would create unparalleled economic chaos, roil financial markets, endanger the country’s credit rating, raise interest rates and more.

Jennifer Scholtes and Burgess Everett contributed to this report.