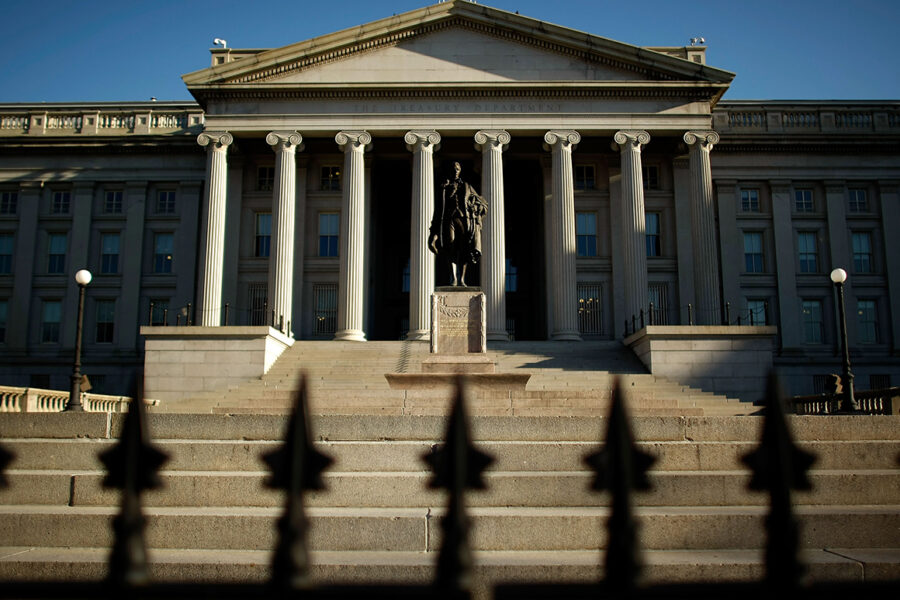 The Treasury Department is moving to rein in a new class of cryptocurrencies whose popularity as a payment method is skyrocketing, citing a need to head off potential risks to consumers and to the financial system.

So-called stablecoins — payment tokens that differ from other cryptocurrencies because their value is often pegged to the U.S. dollar — are drawing scrutiny because they have already been used in trillions of dollars’ worth of lightning-fast transactions and could transform the way Americans pay for things. Treasury and other regulators want to ensure that they’re reliable, even during financial panics.

The new attention is setting up a clash between the emerging crypto industry and financial regulators — and is also feeding tension between the upstarts and more traditional firms like banks, which dominate the payments industry. Yet it’s also a sign that, even as assets like Bitcoin grab headlines as speculative investments, virtual currencies are steadily becoming more enmeshed in the U.S. financial system.

“There are some benefits to consumers that are worth exploring; namely, facilitation of faster payments,” FDIC Chair Jelena McWilliams said in an interview. “But there are also risks if stablecoins are adopted more broadly.”

Because their value doesn’t fluctuate much, stablecoins could gain credibility as a mainstream method of payment, especially if they are adopted for use on e-commerce platforms. Regulators want to ensure that the companies issuing these stablecoins have strong enough assets to back up the tokens, so if users seek to redeem them for cash, they won’t be caught short.

Their use has exploded over the past year. Transactions directly using stablecoins, which were minuscule as recently as 2017, grew from about $250 billion in 2019 to $1 trillion in 2020, according to data from crypto research firm Messari. That growth has accelerated; transaction volume in the first three months of this year roughly matched all of last year, and in the second quarter jumped to $1.7 trillion.

Right now, stablecoins are mostly used as a medium of exchange on cryptocurrency networks, rather than as a replacement for more traditional methods of payment like credit or debit cards. But that could change under the vision of organizations like the Diem Association, which is associated with Facebook and could take advantage of the social media giant’s nearly 3 billion users as a marketplace where its Diem stablecoin could be used to buy goods and services.

Treasury, along with other regulators like the Federal Reserve, the Securities and Exchange Commission and the FDIC, will put out a report within weeks on next steps for regulating these crypto assets. The FDIC insures bank deposits in the event of failures, but stablecoin issuers say they don’t need such backing, arguing that they have adequate assets as reserves.

“What you can find yourself worrying about from a financial stability perspective are not the things that are most risky, but the things that are typically safe, and what can happen to them in a crisis when the thing you thought was safe turned out not to be so,” said a Treasury official, who asked not to be identified because the report hasn’t been released yet.

The coins are popular on decentralized crypto networks where they can be borrowed in exchange for cryptocurrency-based collateral or used as payment in self-executing “smart contracts” that resemble loans or other financial products.

But their broader appeal is speed. Under the traditional U.S. system that handles card payments and direct deposits, transactions are settled en masse three times a day and only during business hours — a costly reality for the millions of Americans living paycheck to paycheck.

The Fed, along with banks, is working to decrease the time it takes people to receive money in their accounts, but in the meantime, an outdated U.S. infrastructure has already spawned companies and products designed to bridge the gap, like Venmo, Square’s Cash App and Zelle.

Stablecoins address a similar problem, since the tokens can be transferred quickly, rather than having to wait for any underlying dollars to hit someone’s account.

But despite the technological benefits, a key question for regulators will be determining whether these assets are actually more like unregulated bank deposits or mutual funds in disguise, only flourishing because they aren’t subject to the same types of rules as those firms.

“The ‘stablecoins’ we see in the marketplace today are anything but stable, and in their current form, lack transparency about what backs them, present heightened financial crime risk, and purport to be far safer than they actually are,” said Paige Paridon, associate general counsel at the Bank Policy Institute, which represents big banks.

Treasury officials say they’d like to create a regulatory framework that would allow stablecoins to be reliable, efficient and inclusive, and that means looking for gaps where current financial rules wouldn’t apply.

The financial firms that issue dollar-pegged stablecoins invest in a variety of assets as backing for their tokens. Some, like the largest stablecoin, Tether, invest heavily in short-term corporate debt, a practice that’s reminiscent of money market mutual funds. That’s caught the attention of the SEC and raises questions about the role these types of coins might play in markets where businesses and the U.S. government itself obtain funding.

But even safer structures of stablecoins could pose headaches for regulators, particularly the Fed, which manages the underlying infrastructure for traditional payments.

“There is a risk that the widespread use of private monies for consumer payments could fragment parts of the U.S. payment system in ways that impose burdens and raise costs for households and businesses,” Fed Governor Lael Brainard, who many progressive groups support to become the next head of the central bank, said in a speech earlier this year.

Avanti Financial CEO Caitlin Long, who heads a not-yet-operating crypto firm that received a “special purpose” bank charter in Wyoming, said this is actually a selling point for stablecoins, whose networks are relatively easy to plug into.

“The winner is going to be the one that’s easiest to integrate with,” she said.

Multiple key firms plan to back their stablecoins only with dollars and U.S. government debt, which comes closer to resembling a bank. Indeed, some stablecoin issuers are pursuing bank-like privileges. Paxos this year received preliminary approval to become a national trust bank. Avanti plans to issue what it sees as “a cash equivalent” once it opens its doors.

Circle, which issues the second-largest stablecoin, USD Coin, is applying to be a national bank, and it says it might not even need deposit insurance because its digital currency is in the process of becoming fully backed by cash and U.S. government debt, unlike traditional bank deposits.

These trends are putting pressure on the Fed to determine whether these unorthodox financial institutions should be allowed access to the traditional payment rails; that is, whether they should be given accounts where they can deposit reserves directly at the Fed.

Such a move might encourage stablecoins to be backed by safer assets by making it less costly for them to hold cash reserves rather than interest-bearing assets. It could also give the Fed more regulatory control over these stablecoins and prevent them from being based offshore, as Tether already is.

But having large quantities of reserves sitting at the Fed might encourage the further development of these assets at a time when the central bank is contemplating simply issuing its own digital currency instead, something that could substitute for many of the same technological draws as stablecoins.

Fed Chair Jerome Powell told lawmakers this summer that “one of the strongest arguments” in favor of a central bank digital currency is the notion that “you wouldn’t need stablecoins.”

Some issuers like Circle and Paxos are contemplating that future as well, believing that the payment networks they build for their stablecoins could be used as roads that a Fed digital dollar could drive on.