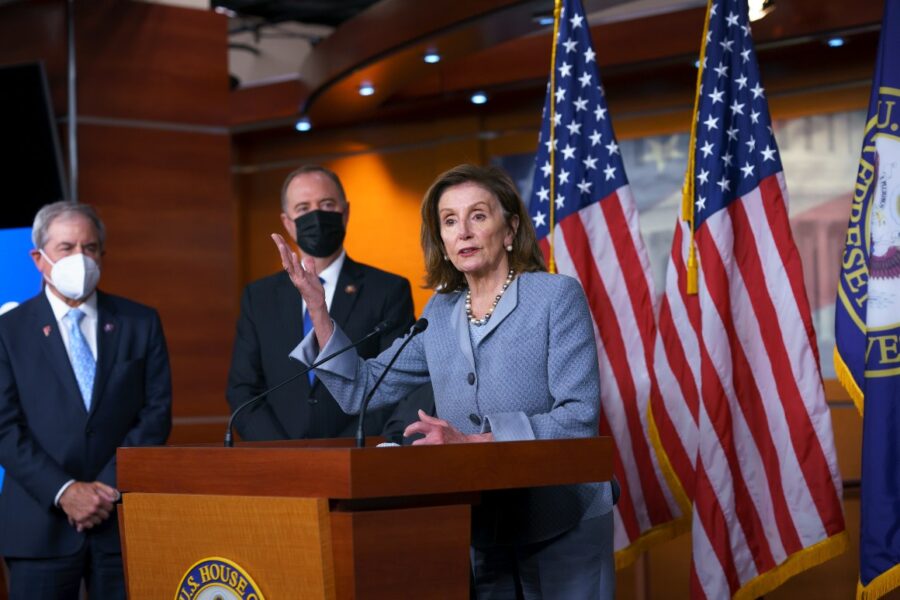 The House passed a fiscal rescue package Tuesday night intended to prevent a government shutdown at month’s end and a U.S. debt default in the coming weeks — if only Senate Republicans would go along.

Succeeding in a 220-211 vote, the stopgap funding bill now heads to the Senate, where GOP leaders say their ranks will sink the plan because it includes a waiver of the nation’s borrowing cap. If Senate Republicans stick to their threat, top Democrats will be forced to scrap the debt remedy or risk a federal funding lapse in less than 10 days.

Unlinking the two issues would ease passage of the funding patch, but Democrats are so far unwilling to forfeit the leverage that comes from tying a government shutdown to the economic fallout next month, as the Treasury Department nears its breaking point on the debt limit.

In the Senate, the package “is going to go down like a fat guy on a seesaw,” Sen. John Kennedy (R-La.) predicted this week.

Kennedy and a few other GOP senators are likely to vote in favor of the bill. But the funding bundle needs support from at least 10 Republicans to make it through the upper chamber, and it’s expected to fall far short.

“Members on both sides of the aisle can support this measure, and I urge them to do so with haste,” Shelby said in a statement upon releasing the Republican alternative.

House Speaker Nancy Pelosi noted on the floor Tuesday evening that Democrats and Republicans have consistently come together in years past to waive or raise the debt limit, voting to avoid default 25 times over the last three decades.

“This has always been bipartisan,” Pelosi said. “Not everybody on either side of the aisle would vote for it, but nobody would let it fail.”

Besides waiving the debt limit until late next year, the House-passed package would keep the government funded at current levels through Dec. 3, presenting a typical pre-holidays spending deadline. It also includes $28.6 billion in disaster aid — including for storm-battered red states — as well as $6.3 billion in funding for Afghan refugees.

GOP senators are expected to block the bill with a legislative filibuster, preventing it from coming up for a final passage vote.

Last month, all but four Senate Republicans signed a letter promising to oppose action to raise the debt ceiling. Those four were Kennedy, as well as Sens. Susan Collins of Maine, Lisa Murkowski of Alaska and Shelby of Alabama.

Of those, Kennedy is the only GOP senator who has said definitely that he will back the short-term spending bill even if it includes debt limit suspension, citing the inclusion of disaster aid for his state. Shelby has said he would oppose the package, while Collins and Murkowski have not said how they will vote. Sen. Bill Cassidy, another Republican from the hurricane-battered state of Louisiana, is also undecided.

Republican Sen. Thom Tillis of North Carolina said this week that he is prepared to reject disaster relief and government funding while Democrats force a vote on the debt ceiling and pursue multitrillion-dollar spending plans without GOP votes. Tillis conceded, however, that some trillions of dollars in federal debt has been racked up on a bipartisan basis over coronavirus relief funding.

“I think it’s valid to say that some of the debt ceiling would be associated with the Covid relief spending,” he said.

The House vote came Tuesday night, after Democratic leaders yanked $1 billion for Israeli missile defense from the government funding package at the last minute amid objections from a group of House progressives.

Instead, House Majority Leader Steny Hoyer said Tuesday night that he plans to call for a vote later in the week on a bill to fully fund the Iron Dome system, which Israel views as critical for its protection from rocket attacks. “I was for that. I’m still for it, we ought to do it,” he said.

“There is no interruption in funding for the Iron Dome,” Appropriations Chair Rosa DeLauro (D-Conn.) said. “We are trying to make this seamless.”

But the episode resurfaced the long-simmering internal tension among Democrats over supporting a longtime U.S. ally in the Middle East. And it comes as Republicans have already sought to portray the majority party as anti-Israel due to progressives’ long-standing skepticism of the U.S.-Israel security relationship.

Two people familiar with the matter said that the group of objectors to the Iron Dome language included the Democrats who pushed earlier this year to cancel an arms sale to Israel amid its shooting war with Hamas militants in Gaza. The funding would have made good on a pledge by the Biden administration to help Israel replace hundreds of interceptors used to knock down rockets Hamas launched from Gaza in the spring.

A number of moderate members tweeted their displeasure with leadership’s decision to punt the money to a year-end appropriations package, which isn’t guaranteed to materialize.

“Iron Dome is a purely *defensive* system — it protects civilians when hundreds of rockets are shot at population centers,” tweeted Rep. Elissa Slotkin (D-Mich.). “Whatever your views on the Israeli-Pal conflict, using a system that just saved hundreds, if not thousands, of lives as a political chit is problematic.”

Of the $6.3 billion in emergency aid for Afghan allies and partners that House Democrats want to provide, the Pentagon would receive more than $2 billion. About $1.7 billion would go to the Administration for Children and Families within the Department of Health and Human Services to provide emergency housing, English language classes, job training and more.

More than $21 million would go to the CDC for medical support and screening for Afghan arrivals and refugees, while $193 million would be spent on Operation Allies Welcome, which is aimed at helping vulnerable Afghans resettle in the U.S.

The short-term funding bill calls for an accounting of U.S. equipment in Afghanistan, including what was left behind in Afghanistan after the U.S. withdrew troops and effectively ceded the country to Taliban control.

The stopgap doesn’t provide a short-term extension for certain transportation programs, which are set to expire along with government funding on Sept. 30. An extension likely won’t be necessary if House Democratic leaders stick to their pledge to pass the Senate’s bipartisan infrastructure bill by Sept. 27, although timing is now in flux as progressives push for action on Biden’s massive social spending bill.

Democrats are proposing a debt limit suspension that would last through Dec. 16, 2022. Failure to pass such a measure before the Treasury Department runs out of money — as soon as next month — would lead to “economic catastrophe,” DeLauro said.

Indeed, a failure of Congress to address the limit on how much money the government can borrow would have significant consequences, roiling financial markets, tanking the government’s credit rating and raising interest rates.

Both parties have backed a bipartisan debt ceiling suspension in recent years, including in August 2019, when the Trump administration struck a deal with congressional leaders to waive the borrowing limit for two years.