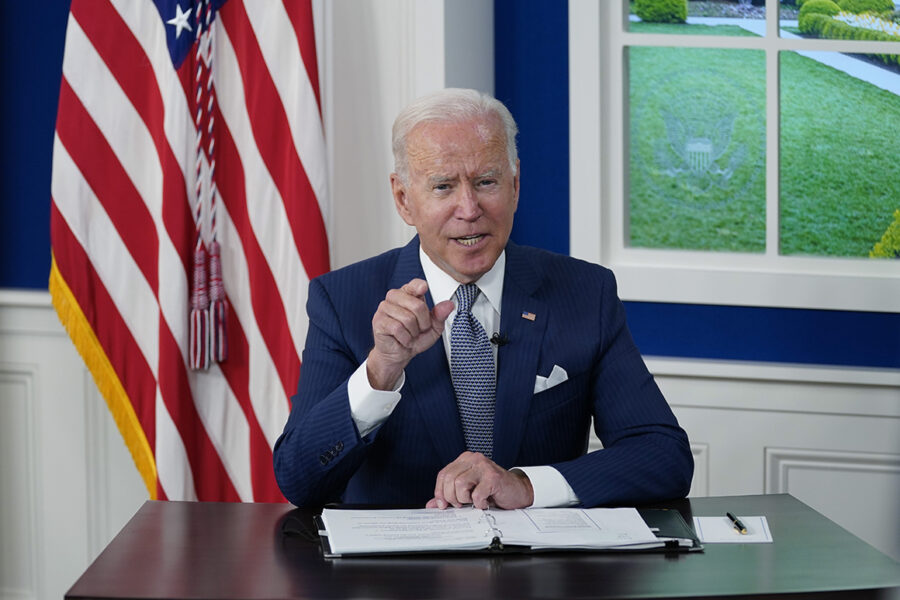 Democrats returned from an Oval Office sitdown Wednesday with earnest pledges to break the logjam threatening their entire domestic agenda — even as deep cracks remain in their party.

“Everybody had a chance to say their piece, and there was a lot of pieces said,” Sen. Jon Tester (D-Mont.) said after meeting with President Joe Biden and other centrists for more than 90 minutes.

Biden convened the high-stakes summit with key progressives and moderates Wednesday in a bid to unify his fractious party — with its threadbare majority in Congress — behind one of the most ambitious presidential agendas in history. Democrats said Wednesday’s talks did not result in a formal detente between the clashing factions, which are caught in an ugly tug-of-war between Biden’s two main priorities: a $3.5 trillion partisan social spending plan and a separate, narrower infrastructure bill.

There was at least one hint of movement to advance the broader, slow-moving package. Sen. Joe Manchin (D-W.Va.) said Biden gave him a specific request — come back to him with a topline price tag the powerful centrist will support.

“‘Please, just work on it. Give me a number, and tell me what you can live with and what you can’t,‘” Manchin said, relaying his conversation with Biden.

Democrats said Biden privately signaled to both the progressive and moderate camps that the overall size of the spending package was up for debate, though he revealed little about where the party expected to end up or when it might get there.

But lawmakers who spent Wednesday afternoon at the White House said they were offered little clarity about a critical looming deadline: a vote on the House floor on the infrastructure deal, which liberals are vowing to block without progress on the broader bill.

“The first step was to convene all of us, and get us to start acting like grown-ups again,” said Sen. Brian Schatz (D-Hawaii). “The next step is to develop a procedural pathway, and the final step is to negotiate all of the substance.”

“But those steps have to happen in that order,” Schatz said.

White House officials said in a statement afterward that Biden and his team planned to have several follow-up meetings “to continue to advance the process of passing these critical bills” — starting on Thursday.

Biden’s shuttle diplomacy was welcomed within the caucus after several Democrats privately complained the White House had been too hands off in recent weeks, particularly in the House, allowing tensions between the party’s two wings to boil over.

“We’re calm and everybody’s good and our work’s almost done,” Speaker Nancy Pelosi said after her own hour-long meeting with Biden and Senate Majority Chuck Schumer ahead of a pivotal five-day stretch in the House.

The president sat down first with centrists in a lengthy session that included individually wrapped chocolate chip cookies for the roughly dozen lawmakers in the room. Biden largely allowed lawmakers to dominate the conversation, and refrained from diving into thorny details such as the price tag or a specific timeline.

“There is a common sense that we want to be able to pass both an infrastructure bill as well as a reconciliation bill,” centrist Rep. Stephanie Murphy (D-Fla.) said afterwards, referring to the $3.5 trillion spending plan that Hill Democrats plan to pass without GOP support using a wonky Senate budget process.

The conversation was “a good first step” on reconciliation, Murphy said, adding that she still expected the House to move ahead with a Monday vote on Biden’s separate infrastructure bill, regardless of the status of the social spending legislation.

Most Democrats are eager to deliver both planks of Biden’s domestic agenda — more than $1 trillion for roads and bridges, plus much more for universal child care, free community college and other safety net programs. But a slim, three-vote margin in the House and a 50-50 Senate has meant that the party’s two disparate flanks are stuck in a public standoff over the fate of their own top priorities.

Leaders of the Congressional Progressive Caucus have warned that more than half of their roughly 100 members will vote against the bill on the floor without more progress on the bigger spending package — a message they reiterated on Wednesday to Biden.

“I reiterated what I have consistently said: progressives will vote for both bills because we proudly support the President’s entire Build Back Better package, but that a majority of our 96-member caucus will only vote for the small infrastructure bill after the Build Back Better Act passes,” CPC Chair Rep. Pramila Jayapal (D-Wash.) said in a statement afterward.

“Everybody’s trying to maximize their advantage,” Rep. Tom Malinowski (D-N.J.), who did not attend the meeting, said of the narrow majority in the House. “Somehow, within those constraints, we have to find the bill that achieves the most while holding the caucus together.”

Democrats hoped that the rare chance for face time with Biden would help tone down some of the intraparty bickering, which lawmakers and aides privately warn is escalating ahead of Monday’s vote on that Senate infrastructure deal.

As the party leader, several Democrats said a clear message from Biden about what he wants — and when he wants it — might be the only thing that could break through all of the noise. But others have been more frustrated, privately saying the president needed to meet with more than just the loudest voices in the caucus and that there are dozens more Democrats with their own concerns.

In a separate meeting in the Capitol on Wednesday, Democrats took part in a strategy session with White House Communications Director Kate Bedingfield about how to message their yet-to-pass bills. That included the best counterpoints for GOP attacks about the $3.5 trillion price tag, according to people in attendance, which will be echoed in a memo that will be sent to Hill offices on Thursday. It leaned into populist themes about sticking it to corporations and mentioned taxes 16 times.

The party’s political dilemma went largely unaddressed in the meeting at the Capitol, according to people who attended.

It remains unclear what will happen Monday when Democratic leaders are scheduled to bring a bill to the floor that they don’t have the votes to pass. Progressives are still insisting they won’t help pass the Senate infrastructure bill until the social spending plan is also teed up for a vote — a tall order given the bicameral haggling that is still underway on a range of unsettled issues related to that package.

Pelosi and her leadership team insist the infrastructure vote is still on track, though lawmakers privately say the outcome is uncertain.

“The bill’s going to be on the floor on Monday,” House Majority Leader Steny Hoyer told reporters Wednesday. Pelosi added later that “we are on schedule” when asked if the House would be considering the social spending plan Monday.

Moderates argue the House will have enough votes to pass that Senate infrastructure bill Monday, predicting that there aren’t enough liberals willing to oppose a plank of Biden’s agenda on the floor. They also say at least some Republicans have pledged to support it, but those GOP votes became harder to rely on Wednesday, with House Republican leaders deciding to whip against the infrastructure bill.

Only about 20 House liberals have gone public with threats to block the bill. But that figure alone could be enough to tank the bill, with multiple sources predicting that fewer than a dozen Republicans would vote for it.

Jayapal got public backing Wednesday afternoon from a group of 11 liberal senators who declared their support for House progressives’ position.

“Abandoning the $3.5 trillion Build Back Better Act and passing the infrastructure bill first would be in violation of that agreement,” the group, led by Sanders, said in a statement.

Biden is entering the arena just five days before the House is expected to take that long-awaited vote on the Senate-passed infrastructure bill, while committee leaders race behind the scenes to assemble as much of the $3.5 trillion package as possible.

“I suspect what the president’s doing today … is trying to establish that both sides, the moderates and progressives, are dealing in good faith. We’re both doing our best to get this stuff done,” said House Budget Committee Chair John Yarmuth (D-Ky.), who said he and other top Democrats are frantically pushing the Senate to move faster on key elements of the sweeping spending plan.

While Biden spent the summer selling his legacy-defining economic proposals to the public from the road, he’s just now sitting down with the very people who will determine if his agenda becomes law. Ahead of the meetings on Wednesday, White House press secretary Jen Psaki stressed that Biden will listen, engage and play a constructive role as leader of the party.

Still, some Democrats said they had hoped the White House could have helped the various factions in the caucus come together to build trust long before votes have been scheduled.

“It’s hard to build a ship the day before you set sail,” said Rep. Dean Phillips (D-Minn.). “It’s a lot of last-minute wheeling and dealing, which is how it works here, but it’s hard to build trust.”