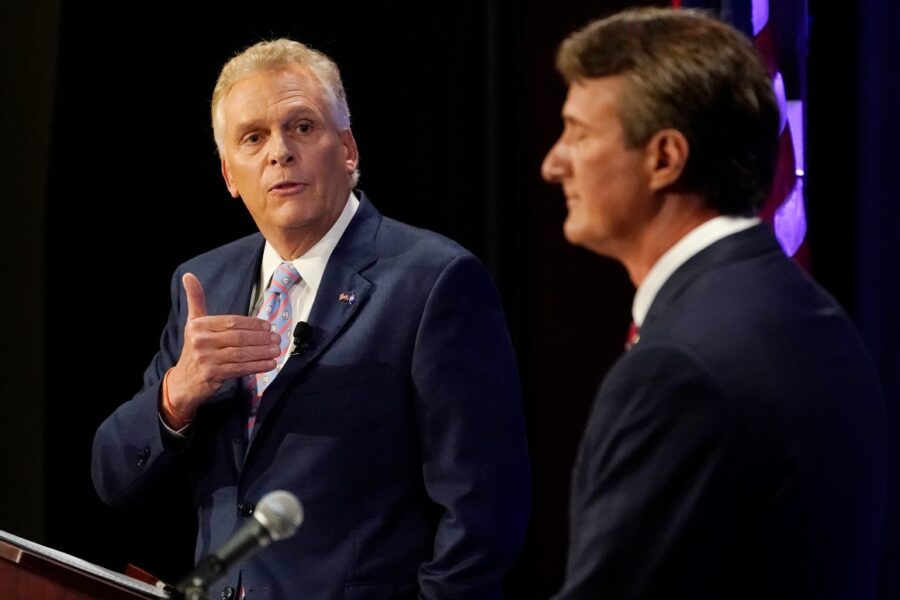 Terry McAuliffe is leaning in on vaccines as the potential key to opening up a tight race for Virginia governor.

McAuliffe, a Democrat who served as governor from 2014 to 2018, has launched an extensive paid advertising campaign going after Republican Glenn Youngkin for not supporting pandemic-related government mandates, and it was one of the Democrat’s primary talking points during the first gubernatorial debate last week.

Youngkin is vaccinated and has been encouraging others to get shots, but he does not support mandates. McAuliffe does support a wide array of mandates — on Wednesday, his campaign put out a new call for child care providers to require staff to be fully vaccinated — and he’s talking about the contrast stridently: “He’s not requiring vaccinations. That’s the difference between the two of us,” McAuliffe said in last week’s debate.

The Democratic push on vaccine policy isn’t new in the last few weeks, but it has escalated in Virginia at the same time that the party celebrated victory in California’s recall election, in which Democratic Gov. Gavin Newsom focused on vaccine mandates as he brushed back the effort to remove him. Newsom cast his victory as a message to national Democrats “that we need to stiffen our spines and lean in to keeping people safe and healthy” in a post-recall interview with CBS News.

“It’s as simple as can be: Stop being timid. Be bold,” Ace Smith, a lead strategist for Newsom in California, said in an interview. Smith praised McAuliffe for campaigning on mandates. “It’s just one of those rare places where good policy actually meets good politics.”

More than 60 percent of McAuliffe’s TV ads over the past week-and-a-half have attacked Youngkin on pandemic policy, according to data from the ad tracking firm AdImpact. The most frequently aired spots featured a doctor lambasting Youngkin over vaccine mandates for health care workers and mask mandates in schools. Two other mandate-focused spots — one an attack ad tying former President Donald Trump to Youngkin on the pandemic, another featuring a parent contrasting McAuliffe and Youngkin on mask and vaccine mandates in schools — are also running, though in lower circulation.

(There is a subtle but notable difference between McAuliffe’s two doctor ads: The ad airing in Northern Virginia has the doctor comparing Youngkin to Trump, saying both “won’t listen to doctors and scientists.” The ad airing in the state’s southern media markets omits the Trump comparison.)

Youngkin has also been on air with ads about vaccines. “It’s your right to make your own choice, and I respect that,” he said in a PSA-style ad. “I do hope you’ll choose to join me in getting the vaccine. We can protect lives, and livelihoods, here in Virginia.”

A second response ad from Youngkin shows a trio of doctors calling McAuliffe’s attacks on the vaccine a “smear campaign,” highlighting that Youngkin has paid for the PSA-style ad urging vaccinations. And during their debate, Youngkin pressed McAuliffe to appear in a PSA together to urge people to get vaccinated. McAuliffe dismissed it “as a political stunt.”

“Glenn Youngkin is doing what leaders do: setting an example, spreading the word about the COVID vaccine’s benefits, and encouraging others to join him in getting vaccinated,” Christian Martinez, a spokesperson for the Youngkin campaign, said in a statement when reached about the ads. “Terry McAuliffe is doing what power-hungry rulers do: threatening to ‘make life difficult’ for anyone who refuses to comply with the rules he has been caught ignoring” — a likely reference to McAuliffe being spotted on an Amtrak train maskless.

While Youngkin is responding to McAuliffe’s attacks, there’s a big disparity in the emphasis the campaigns are putting on vaccine messaging. While most of McAuliffe’s recent ads focused on vaccine and other mandates, Youngkin’s two ads accounted for only 11 percent of his total TV advertising in the same time period, according to AdImpact.

Instead, he’s focused on a law enforcement message from sheriffs endorsing his campaign and an economic one, on eliminating the state’s grocery tax. Those two ads accounted for 75 percent of his total TV spots in the last week, per AdImpact.

“Terry McAuliffe is the only candidate in this race who has been a leader on getting Virginians vaccinated, maintaining a strong economy, and keeping kids safely in school,” Renzo Olivari, a spokesperson for the McAuliffe campaign, said regarding the recent advertising push.

“In the debate, Terry ran an ad on vaccines and hitting Youngkin on that, and Youngkin ran an ad on grocery tax cuts,” said Saxman. “I think that tells you where the campaign is, what’s motivating voters.”

Republicans have suggested that McAuliffe’s attention on mandates in advertising, combined with other messaging on abortion, show that he’s primarily focused on awakening an unengaged Democratic base as early voting begins. Most polling in the state has shown a fairly consistent enthusiasm gap between Democratic voters and more fired-up Republicans, and the surveys have shown Democratic-leaning voters more keyed into the pandemic.

In a recent Washington Post/Schar School poll showing McAuliffe ahead by a 3-point margin among likely voters, voters said that the economy was the most important issue in the governor’s race. But among Democratic and Democratic-leaning registered voters in the poll, the coronavirus was the top issue.

“When we’re on the doors talking to voters, the pandemic, and health care in general, has come up as a top issue for voters,” said Tram Nguyen, the co-executive director of the left-leaning group New Virginia Majority. “I think there’s a general feeling, at least among voters that we talked to, that vaccines are part of a common sense measure to keep communities safe from Covid.”

Meanwhile, a late-August poll from Monmouth University, which had McAuliffe up 5 points over Youngkin, found broad approval for school mask mandates, while a majority supported vaccine mandates for students to attend school. National polling has broadly found support for different types of mandates. 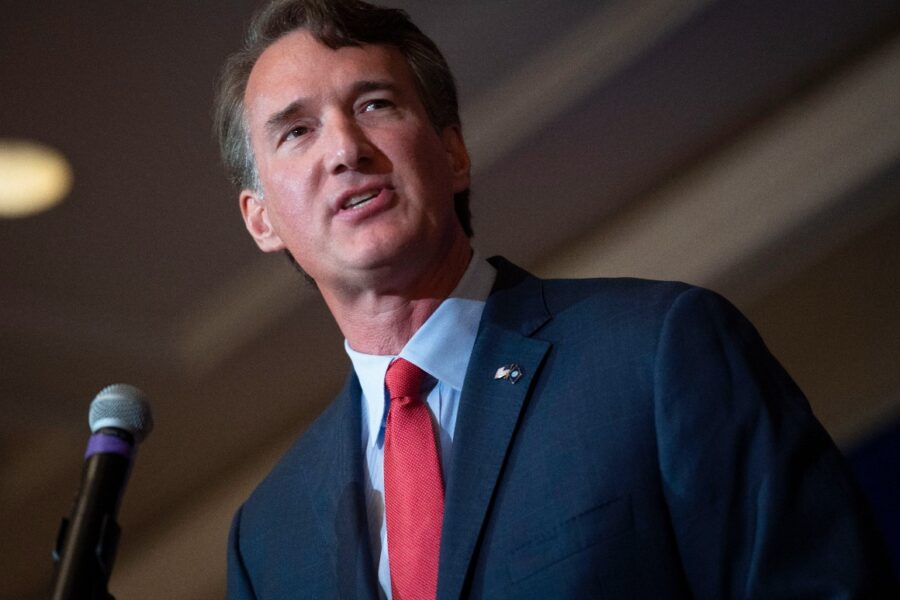 McAuliffe has supported a wide array of pandemic-related mandates in the state, calling for mask mandates in schools and backing former President Joe Biden’s requirement that all federal employees — a large constituency in Virginia — be vaccinated. The Democrat said he supported adding the coronavirus vaccine to the state’s required vaccine list for eligible schoolchildren during the debate. It’s a stronger stance than McAuliffe took in May, before the proliferation of the Delta variant, when he encouraged vaccinations but told a local TV station that school districts should make the choice on mandates.

McAuliffe has also called for businesses to implement their own mandates for employees, and his campaign told POLITICO that he supports the regulations being developed by OSHA that would require employers with at least 100 employees to ensure their workers are either fully vaccinated or tested weekly.

Youngkin says people should get vaccinated, but without the pressure of government policies leaning on them, and that it is ultimately their choice to do so.

During a segment in last week’s debate, when each candidate got to ask their opponent one question, McAuliffe asked Youngkin if he believed a nurse should be required to be vaccinated. Youngkin replied that he doesn’t support mandates, saying he encouraged people to get vaccinated but “respect[ed] your ability to make decisions.”

Smith, the California Democrat, said the specific issue of vaccine mandates for health care workers was one of the issues that turned the California recall in Newsom’s favor after some tight mid-summer polling.

“That’s what kind of kicked it off,” Smith said. “Politically, we went out of our way to make sure that all of our Republican challengers essentially had to answer that question.”